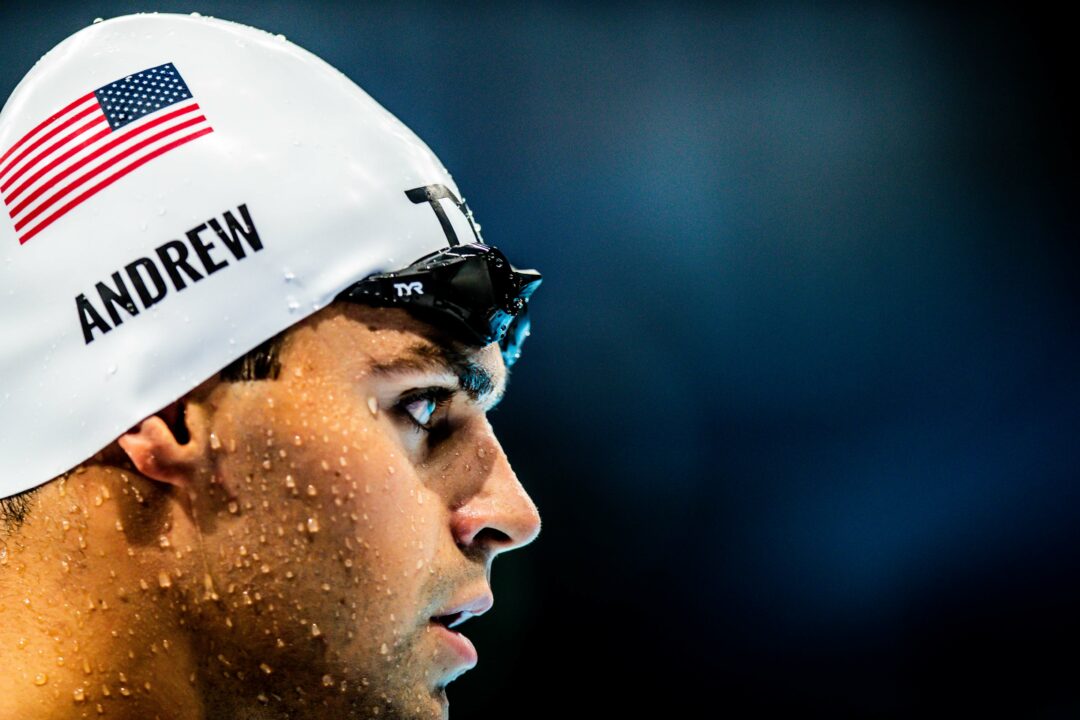 After getting an enormous amount of racing in over the 3-meet circuit, Andrew will stay in Europe and prepare for Worlds Current photo via Jack Spitser/Spitser Photography

After being edged by Andrew for the gold medal in Barcelona, Brazil’s Joao Gomes Junior returned the favor with a first-place finish in Canet. Andrew’s 27.20 was a tenth of a second behind Gomes Junior, slightly slower than his 27.06 that won gold in Barcelona. Brazil put two on the podium with Felipe Franca Silva taking bronze in 27.70, just ahead of Germany’s Lucas Matzerath.

Why is his dad not allowed on deck?

Are they not allowing other coaches to be at training camp? For example is Ray Looze going to be there for Lily and Annie or not?

After watching the above MA video, how one not be an MA fan? He’s thoughtful and articulate.

He thinks vaccines are tested on foetuses, for one.

@Donkey About everyone I know has an oddball idea or two. I don’t know you, but I’ll bet you’ve got a quirky belief stowed away somewhere in your cranium — and that’s just fine!

Returning to swimming. MA seems highly-reflective and mentally disciplined. Do I wish he could solve his last 50 free issue on his 200 IM? Yes, absolutely! On the other hand, he was the only American not named Ledecky or Dressel to final in 3 individual events at the Tokyo Olympics. He’s a fun story to follow, and I enjoy his interviews (and the SwimSwam editors know this).

There’s a difference between an “oddball idea” and an anti-vaxxer whose excuse has been he doesn’t want to put anything “untested” into his body when he’ll put literally anything else Chipotle or one of his sponsors (from U-can to the various keto stuff) gives him into his body. That’s being a hypocritical anti-vaxxer, doubly dangerous.

That’s the thing though. You asked how anybody could not be a fan of MA and this is the truthful response that a lot of swim fans have. And though I agree with the premise that “everyone has an oddball idea or two”, I think it’s purposefully dismissive to try to frame being anti-vax as a harmless/quirky idea as if it was something like pineapples on pizza. The spread of misinformation has been a serious problem and sensitive subject in America for the past few years so it’s not surprising that many people would have a bone to pick with the Andrews regardless of how well MA is swimming.

… Well they will be joining him as he will already be in Europe.

MA has never been pompous in his interviews. He is just talking.

The thumb is on the scale for CD and Nic Finke.

It’s wide open in the 50 free after Caeleb Remel.
However, in the 100 fly, he’s gonna be fighting 5 other guys for the bronze.

He likes the 100 fly so it is reasonable to give it a try on the World class level.

We also don’t know why his sponsors payplan is. He may be paid more for the quantity of finals he appears in. If he was incentivized better for a WR/win he would be better off focusing on 200IM and drop anything it conflicts with.

Some of his swim camps promote him as versatile Olympian.

I’d expect him to swim 100fly prelims and see where his form and rest is at and then make the call on the double.

Chances are the 100 fly will drop him in the last 15 meters.