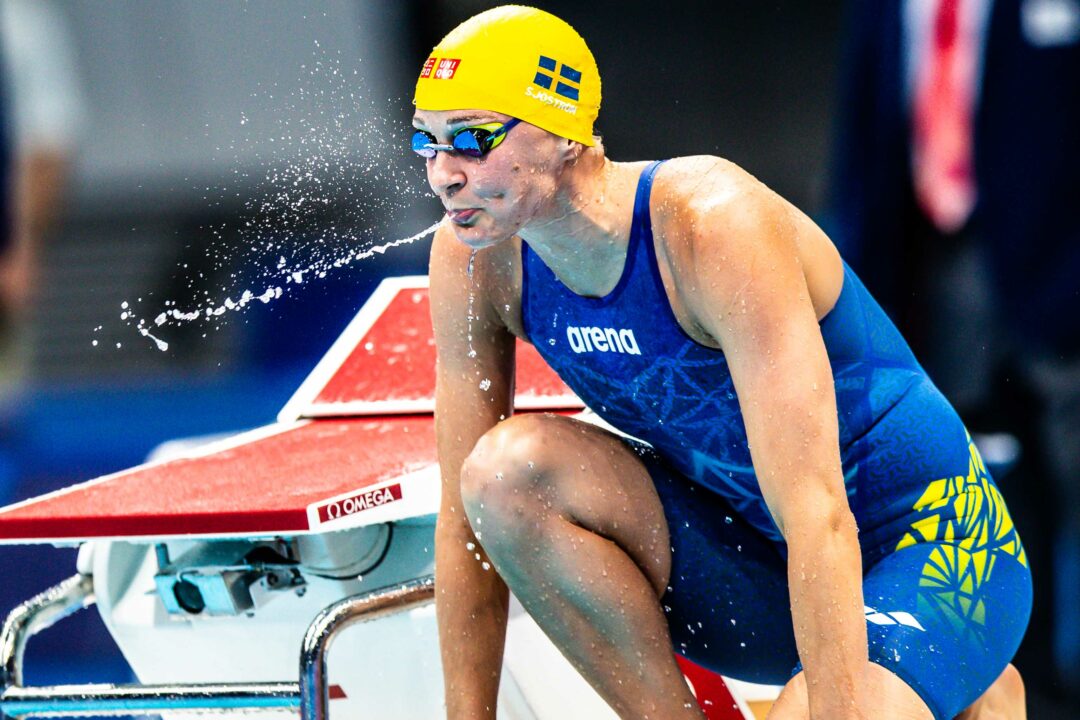 Entering the final stop of the 2022 Mare Nostrum Tour in Canet, there are plenty of big races including athletes such as Maggie MacNeil, Sarah Sjostrom, Penny Oleksiak, and Summer McIntosh. The field for Canet remains similar in size to that of Barcelona, which resulted in several fast swims and meet records eariler in the week.

Let’s take a look at the top 5 stories specifically on the women’s side of the meet.

15-year-old Summer McIntosh has quickly become one of the top distance athletes in the world, holding Canadian Records in the 400 IM and 400 freestyle. Her versatility was first showcased back in March when she dropped a 4:29.12 to move to #3 all-time in the 400 IM.

Like Barcelona, the Canet stop of Mare Nostrum will feature a large group of Texas swimmers looking to make their marks on the international stage, many of whom will be bringing momentum with them from Barcelona.

Texas Longhorn Anna Elendt had a very successful meet in Barcelona, winning the 50 and 100 breaststroke and setting the German national record in the former of the two events. Elendt currently holds the #3 time in the world  this season in the 100 breaststroke and the 5th fastest in the 50 breaststroke, with room to improve this weekend in Canet. She’ll contest the 50, 100, and 200 breaststroke in Canet, mirroring her schedule from Barcelona. Another Longhorn, American Emma Sticklen posted a best time in the 200 butterfly of 2:08.41 to place third. With her swim, Sticklen cut a few tenths off of her time from the US International Team Trials. Sticklen will contest the 200 butterfly again in Canet, where she’ll look to further improve upon her time. She’ll also swim the 50 freestyle, 100 butterfly, and 50 butterfly.

Both Elendt and Sticklen should be strong podium threats in their events, and could even push for gold. They lead a strong group of current and future Texas swimmers who all could find themselves in multiple finals in Canet, including American breaststroke Olympic champion Lydia Jacoby.

Star butterfliers, including world record holders and Olympic champions, headline the butterfly fields in Canet. In the 50 butterfly, world record holder Sarah Sjostrom leads the pack, holding the top seed in the event. She won the same event at the Monaco stop of the series last week, and is the heavy favorite to repeat here. She will be joined by 100 butterfly Olympic Champion Maggie MacNeil, 2016 Olympic butterfly medalist Penny Oleksiak, Frenchwomen Melanie Henique and Marie Wattel, and the Netherlands’ Maaike De Ward.

Sjostrom will not contest the 100 butterfly, leaving MacNeil as the top seed in the event. She will be pushed by Wattel, Swedish star Louise Hansson, Great Britain’s Harriet Jones, and fellow Canadian Katerine Savard. Also in the field are Texas swimmer Olivia Bray, France’s Beryl Gastadello, and the aforementioned Oleksiak, who could all push for the final as well.

The 200 butterfly will also offer a strong field featuring Japan’s Kina Hayashi and Chiho Mizuguchi, along with Great Britain’s Alys Thomas and Laura Stephens. The aforementioned Sticklen will also be in the field as the 5th seed, looking to improve upon her time from Barcelona. Further down the psych sheets, Spanish 200 butterfly Olympic gold medalist Mireia Belmonte is seeded 20th. Although Belmonte was far off of her lifetime best in this event in Monaco, finishing with a 2:19.70, she was three seconds faster in Barcelona (2:16.29). If she continues to improve as she gets back into racing form, Belmonte could find herself in the final.

Clash of the Sprint Freestyle Titans

Even in the absence of superstar Siobhan Haughey, who had to pull out of the series after injuring her ankle, the freestyle fields in Canet are loaded with several big names.

This will be the first meet where we will get to see Swedish world record holder Sarah Sjostrom take on Canadian Olympic Champion Penny Oleksiak head-to-head. The pair are scheduled to both race the 100 freestyle, where Sjostrom holds the top seed and Oleksiak enters as the #2 seed. At last summer’s Olympic Games, Oleksiak bested Sjostrom to finish 4th overall in the event, while Sjostrom finished 5th.

Canadian Women Give 1-2 Punch in the Backstroke Events

Canadians Kylie Masse and Ingrid Wilm proved to be a strong 1-2 punch in the sprint backstroke events in Barcelona. In both the 50 and 100 backstroke, Masse and Wilm placed first and second, leading Canada to the top of the podium. That came shortly after Wilm led the same events at the Monaco stop of the series.

The pair will return for the final stop of Mare Nostrum in Canet, where they could prove to top the podium again. In the 50 backstroke, their teammate Maggie MacNeil is also slated to join them, entering with the top seed in the event. Behind MacNeil, Masse is seeded 2nd and Wilm is seeded 8th. In the 100 backstroke, Masse holds the top seed with Wilm seeded 5th, while Masse also holds the top seed in the 200 backstroke with Wilm seeded 4th. Masse scratched the 200 backstroke in Barcelona, so it will be interesting to see if she decides to race it here. Regardless, the Canadian women have set themselves up for success in the backstroke races here.

Had no idea Summer swam the 200IM. You’d think she’s be faster than 8th?

It was a Canadian age group record, not a bad time given her age.Great swimmer and still developing.

I think Ruck still hold the age group record for the 200 IM. Even so, McIntosh still had a good time.

It’s harder for a 15 year old to match the power of the older women. In a few years she’ll be world class.

She has been shying away from anything over 400! She is pretty young to already cut them out of her repetoire!

Just wrong. She’ll be swimming them heavily thru the summer. Swimming some off events to help diversify and prep. She’s 15… That’s what 15 yr olds are supposed to do, swim variety.

Considering the vast array of events she’s been swimming this year, she has expanded her repetoire. She can’t be expected to swim every event. She will likely add the long distance events back at some point in the future.