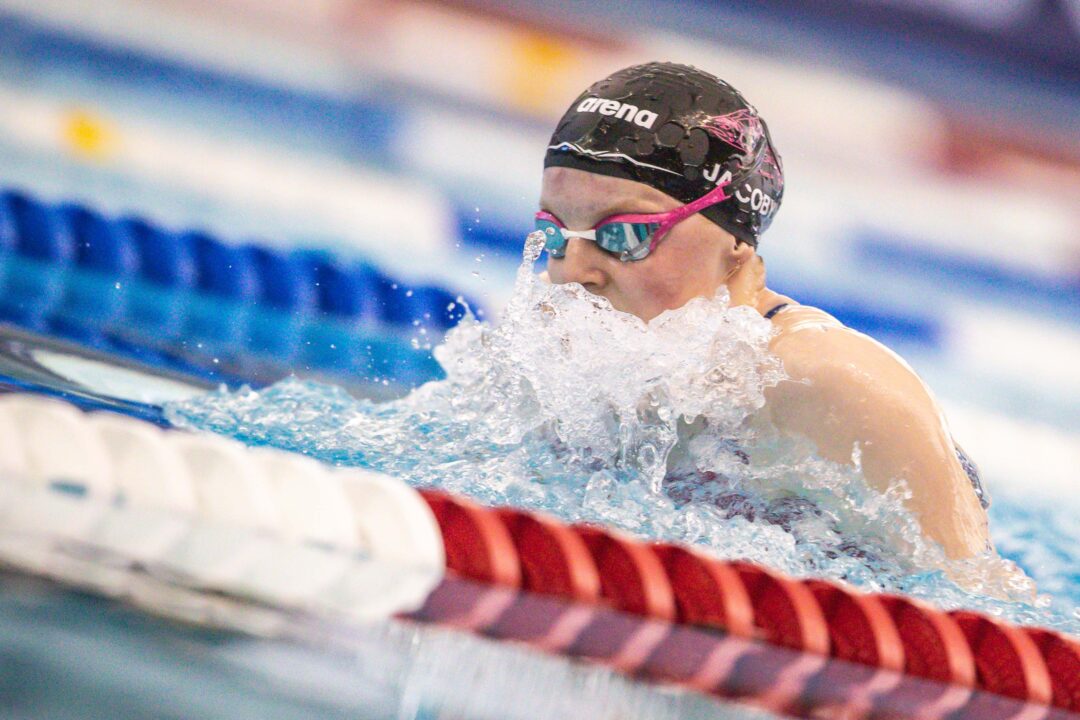 Swedish world record holder Sarah Sjostrom is looking to return atop the podium in the women’s 50 free final, where she’s seeded first with a prelims time of 24.28. The 28-year-old made her return to racing last year in Canet following an elbow injury, placing third. Sjostrom holds the Mare Nostrum record with a 23.85 from 2017 in Canet.

Dutch star Arno Kamminga is attempting to win both the 100 and 200 breast this weekend, a feat he accomplished at the past two Mare Nostrum stops in Barcelona and Monaco. He’ll race the 100 breast finals Saturday around 1 p.m. ET.

Versatile American Michael Andrew qualified first in the men’s 50 back prelims, but he’ll have to hold off Yohann Ndoye-Brouard of France (25.31), Pieter Coetze of South Africa (25.41), and Irie Ryosuke of Japan (25.46) in the final.

The women’s 100 breast final should be a close battle between rising American talent Lydia Jacoby and future Texas Longhorns teammate Anna Elendt of Germany. Jacoby won the title at the first stop in Monaco before Elendt returned the favor in Monaco.

Matt Sates qualified first in the men’s 400 IM prelims, but the 18-year-old South African star scratched from his highly-anticipated showdown with Great Britain’s Tom Dean in the 200 free.

Keep refreshing this page for live, event-by-event updates of all the action from Canet-en-Roussillon.

26-year-old Canadian Kylie Masse touched first in 27.47, breaking the Mare Nostrum Canet record set by Russia’s Anastasia Fesikova back in 2009. France’s Analia Pigree (27.76) and Canada’s Ingrid Wilm (27.81) rounded out the podium for the first final of the evening. Masse won both the 50 back and 100 back at the recent Barcelona stop while Wilm won gold in the 50 and 100 back in Monaco without Masse — the national record holder — competing.

18-year-old South African Pieter Coetze avenged a loss to Michael Andrew in Barcelona last week, bouncing back to beat the top-seeded American by .04 seconds. Coetze’s 24.75 was his best this season and set a new Mare Nostrum Canet record, though the overall Mare Nostrum record is still held by Andrew from a 24.45 from Monaco in 2019. Coetze is building on a solid performance in Barcelona that saw him take home two silver medals and a bronze. France’s Yohann Ndoye-Brouard took bronze in 25.00.

Swedish star Sarah Sjostrom secured her third win of the week with a 24.11 in the women’s 50 free final, comfortably ahead of the field. France’s Melanie Henique was .64 seconds behind in second place while Great Britain’s Anna Hopkin won a bronze medal in 24.76. It marked a return atop the podium for Sjostrom, who placed third in Canet last year in her first competition since suffering an elbow injury.

Brazil’s Bruno Fratus won this sprint at the first two stops of this year’s Mare Nostrum tour, but Great Britain’s Ben Proud stole the title from him in Canet with a 21.85. Fratus, a 32-year-old Olympic medalist, entered the finals as the top seed and still managed to notch another sub-22 swim on his quest for 100. Twenty-seven-year-old Jesse Puts of the Netherlands placed third in 22.08 while Andrew placed eighth in 23.17 just minutes after his runner-up finish in the 50 back final. Fratus holds the Mare Nostrum record in the event with a 21.31 from Monaco in 2019.

Viktoria Mihalyvari Farkas ran away with the gold medal in the women’s 1500 freestyle final by more than 15 seconds. Portugal’s Tamila Holub took silver in 16:38.40 while Great Britain’s Amber Keegan won bronze in 16:42.50.

In a thrilling race, top-seeded Daniel Jervis of Great Britain got off to a fast start, but France’s Joris Bouchaut overtook him headed into the final 100 meters and dominated the last two lengths of the pool to win in 3:49.66 in front of the home crowd. Jervis faded to fourth place down the stretch as Germany’s Henning Mujlleitner won a silver medal in 3:50.80 and 22-year-old Estonian Kregor Zirk took bronze in 3:51.12. Bouchaut triumphed in the 800 free in Barcelona in similar fashion with a 7:53.03.

Kylie Masse won her second race of the day and fourth of the week, cruising to a victory in the women’s 200 back final in 2:09.34. The four-time Olympic medalist was less than two seconds off her season-best time of 2:07.66 that ranks sixth in the world. Hungary’s Eszter Szabo Feltothy touched the wall 1.64 seconds behind Masse, and France’s Pauline Mahieu took bronze in 2:11.10.

An hour after winning the 50 back final, Pieter Coetze pieced together an impressive race to win another gold medal in the 200 back. The 18-year-old South African finished .61 seconds ahead of the top-seeded Luke Greenbank to continue a huge week on the Mare Nostrum tour. France’s Mewen Tomac swam a 1:59.54 to keep Italy’s Thomas Ceccon (1:59.81) off the podium.

University of Texas swimmer Anna Elendt kept her momentum from Barcelona, where she won gold in both the 50 and 100 breast, by winning her third gold in as many events. Not only did the 20-year-old German hold off Japan’s Reona Aoki by .34 seconds, but she also edged reigning Olympic champion — and future Longhorn teammate — Lydia Jacoby by .37 seconds. Jacoby won the event at the first stop in Monaco without Elendt competing.

Arno Kamminga clocked a 59.43 to beat Japan’s Ryuya Mura by more than half a second in the men’s 100 breast final, marking his fifth victory of the week. The 26-year-old Dutchman shaved .13 seconds off his prelims time. Kamminga appears on his way to another double in the 100 and 200 breast after accomplishing the feat at the first two Mare Nostrum stops last week. Brazil’s Joao Gomes Junior took bronze, just over a second slower than Kamminga. Andrew placed eighth in 1:01.29.

15-year-old Canadian Summer McIntosh earned a victory in the women’s 200 IM final after making her Mare Nostrum debut in Barcelona with an eighth-place finish in the event. Her 2:10.75 was a half second faster than Japan’s Yui Ohashi, a time that ranks as the 10th-quickest in the world this year. Great Britain’s Abbie Wood took home her third bronze medal of the week after winning a pair in the 200 IM and 400 IM in Barcelona.

18-year-old South African sensation Matt Sates continued his torrid pace at Mare Nostrum with his eighth gold medal in eight races. Hungary’s David Verraszto challenged in 4:15.30, more than four seconds ahead of the next finisher, Great Britain’s Max Litchfield. The podium result was identical to the seeding entering the final.

Louise Hansson was only slightly slower than her season-best 56.83 from last month in winning the women’s 100 fly final with a 57.15. Maggie MacNeil, who made her return to competition from an elbow injury during the Barcelona stop, won silver .46 seconds behind Hansson. Marie Wattel took bronze .60 seconds behind Hansson while University of Texas swimmer Emma Sticklen placed sixth in 58.98.

Japan’s Naoki Mizunuma once again beat out a pair of Olympic medalists in the men’s 100 fly finals. The 25-year-old Mizunuma, who in March became the first Japanese man under 51 seconds in the 100 fly, shaved .20 seconds off his prelims time with a 51.62 on Saturday that ranked ahead of Swiss star Noe Ponti (51.83) and South Africa’s most decorated Olympian, Chad le Clos (52.14). Mizunuma placed first in Barcelona while Ponti edged le Clos at the first stop in Monaco without Mizunuma in the field.

Tom Dean only qualified fourth in the morning heats, but the reigning Olympic champion must have been saving his energy for the final. The 22-year-old Brit held off Japan’s Katsuhiro Masumoto by .24 seconds while top-seeded Brazilian Fernando Scheffer fell to third place in 1:48.45. Dean’s 1:46.94 was more than two seconds faster than his swim from this morning’s prelims. Matt Sates, who edged Dean in the event in Barcelona, scratched from the prelims.

Nice to see Viktoria back with a win after her illness. Wonder if she can swim under 4:40 in the IM. Will be a strong field, one of the highlights of the 2nd day.

Interesting that 8th place is only mentioned when it’s Michael Andrew. How come other last place swimmers aren’t highlighted…..🤔

Because it’s not common to see a 21.4 50m freestyler with an Olympic gold medal to his name place 8th.

Is there any site for better times? No splits anywhere.

It will be fun to see Anna elent and Lydia jacoby train together. More and more, it’s looks like lydias choice to go to Texas seems like the best choice possible. Carol and Mitch are doing really well ncaa team wise, training breaststroke well, are giving their swimmers good racing opportunities outside of worlds (Texas was the only ncaa team to take a few girls to this meet) and seem to have a great culture at the team.

They looked great in the San Antonio PS

Not Summer’s Mare Nostrum debut, she did swim earlier this week in Barcelona placing 8th in the 200IM.

I see the 200IM summary has been updated and corrected (my initial comment seems out of place now).

I’d say that the Women’s 200 Fly in the article is probably the 200 Freestyle – it would be a weird event for some of those athletes and an awe fully fast event!

Anna Elendt is the next great female breaststroke talent

Yeah, no. Great talent. Work ethic is the limiting factor.