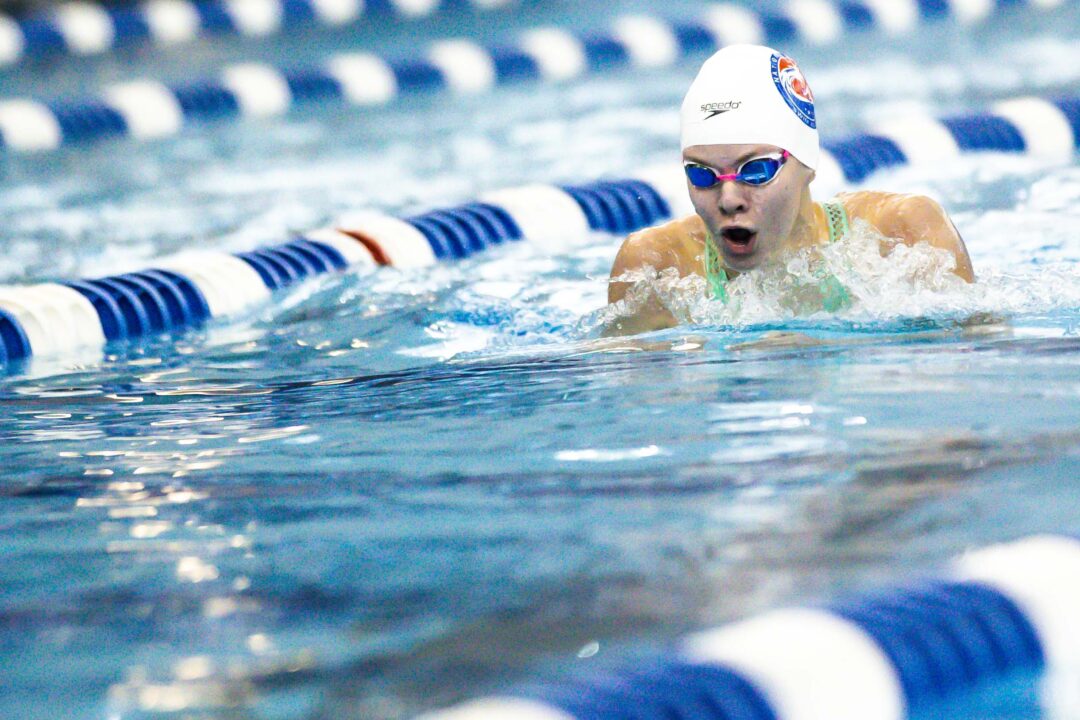 The sixth and final day of the 2022 Mare Nostrum Series got underway Sunday morning at the tour's third stop in Canet-en-Roussillon, France. Archive photo via Jack Spitser/Spitser Photography

The first morning heats featured do-it-all American Michael Andrew qualifying second in the men’s 50 fly prelims with a 23.62, .05 seconds behind Trinidad and Tobago’s Dylan Carter (23.57). 42-year-old Brazilian Nicholas Santos is seeded sixth with a 23.76 after winning the event at the past two Mare Nostrum stops in Barcelona and Monaco. Hungarian Szebasztian Szabo, the bronze medalist from Barcelona who shares the short course world record in this event with Santos, qualified third in 23.45. Ukrainian world record holder Andrii Govorov and Great Britain’s Ben Proud tied for the fourth seed with a 23.72.

Andrew paced the men’s 50 breast field with a 27.36 in prelims as the 23-year-old looks to defend his title from Barcelona. Brazil’s Joao Gomes Junior, who earned a silver medal .12 seconds behind Andrew’s 27.06 in Barcelona, qualified second with a 27.50 in Sunday’s morning heats. Andrew ranks the world with his newly-minted 26.52 American Record while Gomes Junior checks in as the world’s fourth-fastest performer this season with a 26.62 from April’s Brazil Swimming Trophy.

In the women’s 50 fly prelims, Swedish world record holder Sarah Sjostrom was the only swimmer sub-26 seconds at 25.79. Canada’s Maggie MacNeil, the reigning Olympic champion in the 100 fly, figures to be Sjostrom’s biggest challenger here after qualifying second with a 26.26. Fellow Swede Sara Junevik (26.41), Dutchwoman Tessa Giele (26.62), and soon-to-be University of Texas senior Kelly Pash (26.77) should also be in the hunt.

Sjostrom also had the top qualifying time in the women’s 100 free heats. Her 53.75 was faster than Canada’s Penny Oleksiak (54.04) and Great Britain’s Anna Hopkin (54.37). In the men’s 100 free prelims, Italy’s Thomas Ceccon clocked a 48.67 to secure the top seed. France’s Maxime Grousset, who won the event in Monaco, qualified second in 48.88. After winning the event in Barcelona, Great Britain’s Tom Dean snuck into the ‘A’ final in the eighth qualifying spot with a 49.37.

South Africa’s Matt Sates is seeking his ninth gold medal of this year’s Mare Nostrum tour in the men’s 200 IM, where he qualified third in prelims with a 2:01.32. Switzerland’s Jeremy Desplanches had the top time with a 2:00.68 while former Texas Longhorn Sam Stewart was close behind with a 2:00.90. In the women’s 400 IM prelims, Japan’s Ageha Tanigawa finished nearly three seconds ahead of the field with a 4:42.49. Hungary’s Katinka Hosszu qualified second with a 4:45.27.

The women’s 50 breast final is shaping up to be a tight race after the top three swimmers in prelims were separated by less than a tenth of a second. Germany’s Anna Elendt (30.74) touched just .05 ahead of South Africa’s Lara van Niekerk (30.79), who won the event in Monaco. Brazil’s Jhennifer Conceicao placed third with a 30.82 and American Olympian Lydia Jacoby qualified fourth with a 30.90. Elendt, another Texas Longhorn competing in Canet, is trying to pull off a perfect four gold medals in four races across her two stops on the Mare Nostrum tour.

U.S. National Junior Team member Erin Gemmell had the top time in the women’s 400 free prelims with a 4:12.88. The Texas commit (arriving on campus in the fall of 2023) is eyeing her first Mare Nostrum gold medal after capturing silver in the 200 free in Barcelona. She’ll have to hold off the Japanese duo of Miyu Namba (4:13.57) and Waka Kobori (4:13.80) as well as France’s Charlotte Bonnet, who won yesterday’s 200 free and qualified fifth this morning with a 4:16.08. Namba took bronze at the Barcelona stop with a 4:09.59.

Canada’s Kylie Masse appears on her way to a clean sweep of the backstroke events in Canet after earning double gold in the 50 and 200 back on Saturday. During the women’s 100 back heats, the reigning Olympic silver medalist posted a 59.02 to lead the field by more than a second. In pursuit of Masse were Great Britain’s Medi Harris (1:00.27), France’s Emma Terebo (1:00.82), and fellow Canadian Ingrid Wilm (1:00.98).

A pair of British swimmers topped the women’s 200 breast prelims as the only sub-2:28 swimmers in the field. Molly Renshaw led the way in 2:27.71 while fellow countrywoman Abbie Wood was close behind in 2:27.84. Ireland’s Mona McSharry, who took silver behind Renshaw in Barcelona, qualified third in 2:28.43 while Elendt was fifth in 2:28.88. Jacoby, who won gold in Monaco with a 2:25.98, made the ‘B’ final in Canet along with 15-year-old Canadian Summer McIntosh.

In the men’s 200 breast prelims, Dutch star Arno Kamminga established himself as the favorite with a top-seeded time of 2:12.18. The 26-year-old will have to fend off Sweden’s Erik Persson (2:12.56) to claim his third-straight double gold during this Mare Nostrum tour in the 100 and 200 breast.

Soon-to-be University of Texas junior Emma Sticklen qualified third in the women’s 200 fly prelims with a 2:10.00, slightly slower than Great Britain’s Laura Stephens (2:09.89) and Japan’s Kina Hayashi (2:09.66). Stephens edged Hayashi for gold in Barcelona while Sticklen took bronze. In the men’s 200 fly prelims, Hungary’s Tamas Kenderesi earned the top seed entering the finals with a 1:56.73. Swiss standout Noe Ponti, who won the event in Monaco and finished second behind Kristof Milak in Barcelona, tied for the third qualifying spot with Italy’s Giacomo Carini in 1:58.08. Belgium’s Louis Croenen qualified second with a 1:57.99.

After taking bronze in the men’s 50 back final yesterday, France’s Yohann Ndoye-Brouard put himself in good position to top the podium in today’s 100 back final. Ndoye-Brouard was the only swimmer sub-54 seconds during the men’s 100 back morning heats, snagging the top seed with a 53.41. Japan’s Ryosuke Irie clocked a 54.04 for the No. 2 seed while South Africa’s Pieter Coetze qualified third with a 54.48. Twenty-four-year-old American Coleman Stewart is the No. 4 seed after clocking a 54.97. Two more Americans, Andrew and Sam Stewart, made the ‘B’ final.