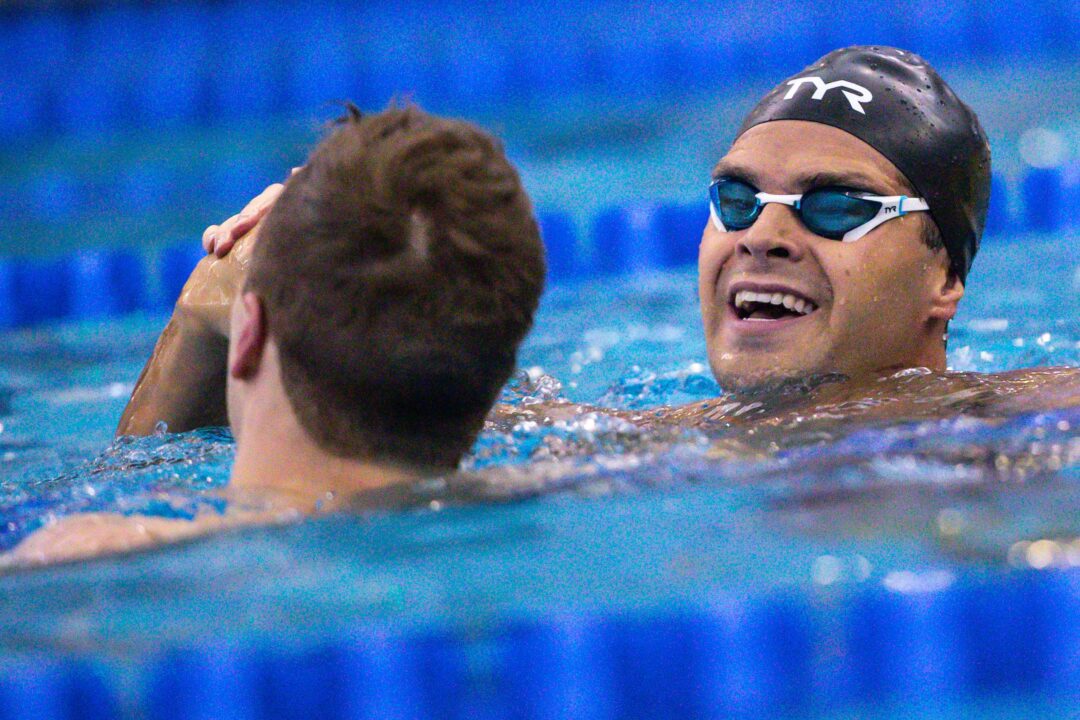 The third and final stop of the Mare Nostrum tour began Saturday in Canet, France, where rising stars challenged established Olympians in the morning heats.

Versatile American star Michael Andrew started the day by taking the top seed in the men’s 50 back prelims (25.19) after breaking the meet record in the event during the tour’s previous stop in Barcelona (24.64). Yohann Ndoye-Brouard of France (25.31), Pieter Coetze of South Africa (25.41), and Irie Ryosuke of Japan (25.46) were in close pursuit.

Swedish world record holder Sarah Sjostrom surged ahead of the women’s 50 free prelims with a 24.28. Great Britain’s Anna Hopkin was next to touch the wall in 24.92. Sjostrom – who holds the Mare Nostrum record (23.85) in the event from 2017 in Canet – won the sprint in 24.08 during a head-to-head race against Dutch standout Valerie van Roon in Monaco last weekend before sitting out the event in Barcelona. France’s Melanie Henique (25.25) and van Roon (25.28) enter the final placed third and fourth, respectively.

In the men’s 50 free, Brazil’s Bruno Fratus (22.10) held off Great Britain’s Ben Proud (22.18) for the top spot heading into the finals. Fratus, a 32-year-old Olympic medalist, won the sprint at the first two stops of this year’s Mare Nostrum tour.

The men’s 200 back is shaping up to be a tight race after the top three finishers in prelims were separated by a mere .03 seconds. Great Britain’s Luke Greenbank touched first in 2:00.14, followed by Italy’s Thomas Ceccon and Coetze each in 2:00.17.

American teenage sensation Lydia Jacoby is in prime position to capture her second women’s 100 breast title of this Mare Nostrum tour after the reigning Olympic champion snagged the top seed in prelims with a 1:07.23. Her future teammate at the University of Texas, Germany’s Anna Elendt, enters the finals seeded second in 1:07.30 following a first-place finish at the Barcelona stop in 1:06.07. Jacoby won the first stop at Monaco in 1:06.55 without Elendt in the field.

Arno Kamminga was the only swimmer under a minute in the men’s 100 breast prelims with a 59.56. The two-time Olympic silver medalist from the Netherlands is trying to pull off a triple-double of sorts, eyeing victories in the 100 and 200 breast finals after achieving the feat during each of the first two Mare Nostrum stops last week.

Sweden’s Louise Hansson touched the wall in 57.28 to top the women’s 100 fly prelims, more than a second ahead of France’s Marie Wattel (58.39). Reigning Olympic champion Maggie MacNeil, who made her return from an elbow injury during the recent stop in Barcelona, enters the finals seeded third with a 58.76.

Japan’s Naoki Mizunuma once again beat out a pair of Olympic medalists in the men’s 100 fly prelims. The 25-year-old Mizunuma, who in March became the first Japanese man under 51 seconds in the 100 fly, continued his momentum with a 51.62 on Saturday that ranked ahead of Swiss star Noe Ponti (52.17) and South Africa’s most decorated Olympian, Chad le Clos (52.47). Mizunuma placed first in Barcelona while Ponti edged le Clos at the first stop in Monaco without Mizunuma in the field.

Canadian Olympic champion Penny Oleksiak defended her top seed in the women’s 100 free prelims with a 1:58.57, barely ahead of France’s Charlotte Bonnet. Another future Texas Longhorn, Erin Gemmell, qualified fourth with a 1:59.50.

The men’s 200 free was one of the most anticipated races of the weekend after Sates stole gold ahead of reigning Olympic champion Tom Dean in Barcelona. Sates scratched from the morning heat of the 200 free, however, leaving the showdown for another meet. Brazil’s Fernando Scheffer had the top time in prelims with a 1:48.09 while Dean qualified fourth with a 1:49.18.

She is a trained massage therapist, so not really a career change lol.