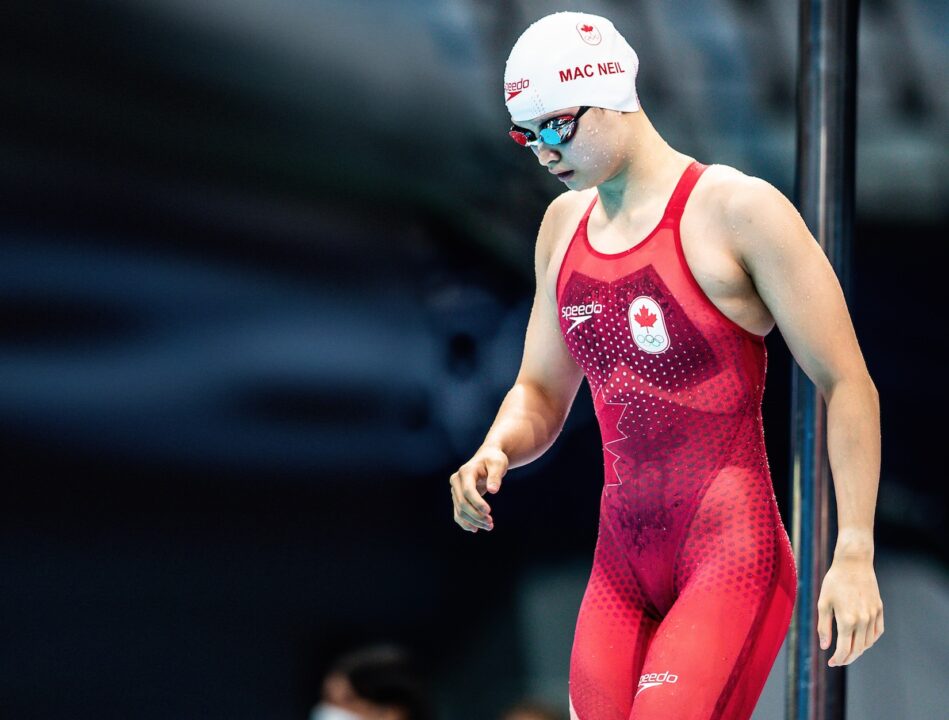 Maggie MacNeil raced for the first time since her elbow injury, placing third in the 100 free on Day 1 of the Barcelona Mare Nostrum stop. Archive photo via Jack Spitser/Spitser Photography

On Wednesday at the Barcelona stop on the Mare Nostrum tour, Maggie MacNeil raced for the first time since she revealed at Canadian Trials that she suffered an elbow injury at NCAAs. Despite the injury, MacNeil won the 100 fly, setting her up to defend her Olympic gold at World Championships. However, she also announced her decision to not race any individual races at World Championships, instead choosing to focus on the relays and prioritize her mental health.

MacNeil raced the 100 free on Day 1, forgoing the 50 back where she is the world record holder in the short-course meters edition. In prelims of the 100 free, she swam 55.09 to qualify for finals in sixth.

At the evening finals session, she won bronze in 54.32, behind Marrit Steenbergen and Olympic teammate Kayla Sanchez. MacNeil actually flipped in fourth, but ran down Great Britain’s Anna Hopkin over the final 50 to grab the final podium spot. She split 26.33/28.05.

54.32 is a strong swim for MacNeil, especially given that this is her first meet since her injury. It’s only three tenths off her best of 54.02 from the 2021 Canadian Olympic Trials, and is the fourth-best swim of her career. With that swim, she qualified for the 4×100 free relay. At the Olympics, she and her teammates out-touched the U.S for silver by three one-hundredths.

At the time of her injury, MacNeil said that her elbow fracture wasn’t as severe as that of Sarah Sjostrom, who broke her elbow in February 2021 when she slipped on ice. Sjostrom healed well enough to win a silver medal in the 50 free at the Olympics.

She’s also scheduled to swim in the third stop of the Mare Nostrum tour in Canet-en-Roussillion. She’s entered in the 100 free, 50 back, 50 fly, and 100 fly.

In March, MacNeil announced that she will use her fifth year of eligibility at Cal. She intends to pursue a master’s degree after graduating this spring from the University of Michigan. Prior to her announcement, MacNeil had been in the transfer portal since last July, when her primary coach Rick Bishop took the head coaching position at LSU, with the intention of transferring after she completed her undergraduate degree at Michigan.

To watch the 100 free final from Barcelona, click here.

I hope she finds a good landing spot for her last year of NCAA eligibility.

Wonder if LSU has a grad program she wants? Bishop coaching there now.

Nice swim after injury and in training. This bodes well for her relay swims at worlds. Good for her.

Definitely thought this could be about her returning to Not-Cal.