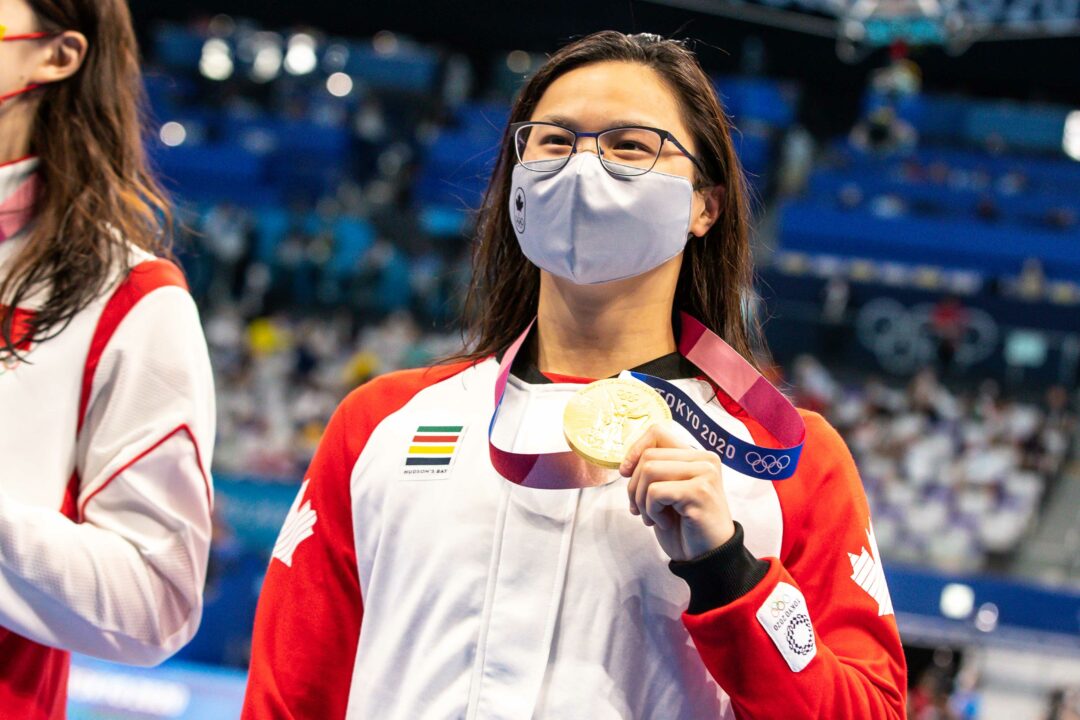 MacNeil cites prioritizing her mental health as the primary driver for the decision. Stock photo via Jack Spitser/Spitser Photography

In an interview with the CBC today, Olympic Champion Maggie MacNeil announced she will not be competing in individual events at this summer’s FINA World Championships in Budapest. She will still be competing on Canada’s relays at World Champs, but has made the decision to sit out of any individuals.

MacNeil cites prioritizing her mental health as the primary driver for the decision. According to the 22-year-old, she’s been experiencing bouts of anxiety due to a perceived pressure to succeed, which has made competition more difficult.

“I’ve come across some post-Olympic struggles and it’s been really challenging. That was a really big challenge for me. I realize everyone goes through struggles and it’s OK to have those struggles,” MacNeil tells CBC. “I always thought I was invincible. I was completely normal and fine in high school and most of college. But I think this year was a little more difficult for me.”

It’s easy to understand how the feelings of pressure and performance anxiety could have mounted on MacNeil following her Olympic Gold. She entered her freshman season at the University of Michigan as a great recruit, to be sure, but few foresaw the magnitude of her immediate impact on the NCAA. As a freshman, MacNeil not only established herself as one of the top swimmers in the NCAA, but she was already putting up historically fast times, particularly in the 100 fly.

Following her freshman season at Michigan, MacNeil went to the 2019 World Championships, where she was still a relatively unknown quantity in the context of senior international competition. She would manufacture an incredible comeback in finals of the women’s 100 fly to beat World Record holder Sarah Sjostrom for World Champs Gold.

During the 2020-2021 NCAA season, MacNeil became the first woman ever to break 49 seconds in the SCY 100 fly. She then went to the Olympics, where she would be facing the pressure of being the reigning World Champion in an absolutely stacked field in the women’s 100 fly final. She managed to do it again, edging out Zhang Yufei and Emma McKeon, both of whom were on fire in Tokyo, for Olympic Gold.

As MacNeil said to CBC, it’s normal for swimmers to experience post-Olympic struggles, but even, so MacNeil would go on to tear it up at the SC World Champs in December of 2021. She won 4 Gold Medals and a Silver, even totally unexpectedly breaking the World Record in the SCM 50 backstroke.

Taking all that into account, one can see where MacNeil would start to place considerable pressure on herself to succeed at the highest levels. In the past 3-4 years, she’s gone from an underdog to one of the fastest female butterfliers in history, who know carries the weight of Olympic Gold.

According to the CBC report, MacNeil met with Swimming Canada’s High Performance Director in February, discussing the concerns she was facing over performance expectations. MacNeil and Atkinson agreed it would be best for MacNeil to forego any individual racing at the World Championships this summer, and instead only focus on the relays.

“It’s hard to stay at the top and that pressure really got to me. I need a chill summer. I don’t want to be out of international competition. I want to train and compete well for Canada but I needed that little bit of a let up I guess.”

MacNeil had a tiny bit of a down year at NCAAs this season. On top of any performance anxiety, MacNeil shared with CBC that she slipped and fell on the pool deck at NCAAs, which resulted in a small fracture on her elbow. The site of the impact was bruised following the fall, so MacNeil assumed it was a bone bruise, but she recently went to get it checked out, and it turns out to be a small fracture.

Despite the fracture, MacNeil won the women’s 100 fly tonight at Canadian Trials, swimming a 57.13. It’s unclear whether this has any relation to MacNeil’s mental health, but she recently announced she will be transferring from Michigan to Cal to use her 5th year of NCAA eligibility.

She’s starting a master’s degree at Cal, so it makes sense that she’ll use her 5th year of NCAA eligibility there instead of at Michigan.

There is also the possibility she has plateaued. That is very difficult for an elite athlete like Maggie to deal with. This happens all the time with swimmers. She already is one of the best butterfliers of all time. I hope she sorts things out so we can continue to watch her unbelievable underwaters.

the concept of a plateau is silly and has no evidence backing it. Even the best swimmers in the world have things to improve on, even if they’re no longer able to keep increasing their physical fitness

an underdog to one of the fastest female butterfliers in history, who know carries the weight of Olympic Gold.

Especially being a post-Olympic year too, feel like that’s probably the best time to roll things back if needed.

I applaud Maggie – go and have a great time being on the relay teams!!!!

A reminder too that there is a fine line between analyzing the ups and downs of swimmers and making comments that could be interpreted as personally criticizing a swimmer or coach. I know for a fact that many of the best swimmers read SS comments.

God I wish they wouldn’t. Can’t blame ’em, I wouldn’t be able to ignore people talking about me, either.

That said, this comment section so far has been much more supportive than I initially expected. I like it when we do that.

I’m so glad we live in a time and place where Maggie can do this if she wants. Probably even ten years ago she would have been lambasted but these comments are nothing but kind and reasonable. Good luck with everything!

She has such tremendous year last year that everyone ends up keeping their eyes on her and it culminates on that 50 back sc world record. Everyone expects her to do well and it really affects her mental I guess and it shows on her ncaa performance. Not that she’s not doing well but we all expect her to defend her titles. So happy to see her prioritizing her mental well-being. Best wishes, Maggie.