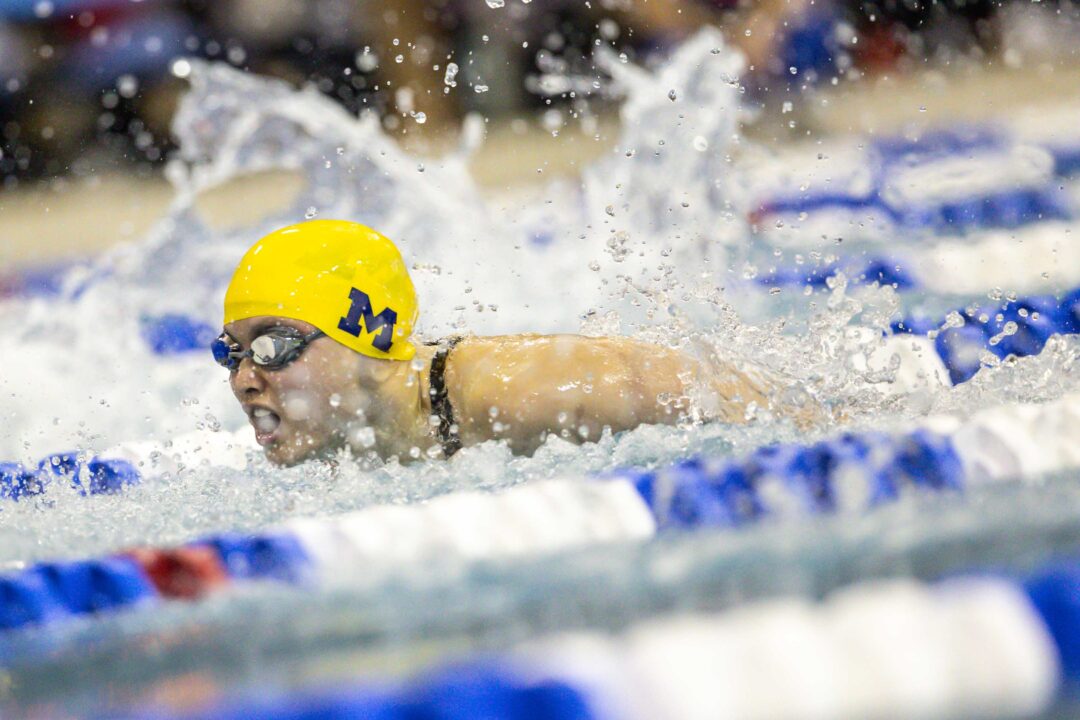 Maggie MacNeil has announced via Instagram that will be using her final year of NCAA eligibility at Cal next year. Stock photo via Jack Spitser/Spitser Photography

Maggie MacNeil has announced via Instagram that will be using her final year of NCAA eligibility at Cal next year. The decision comes after MacNeil entered the NCAA transfer portal last July. MacNeil entering the transfer portal came following the news that longtime Michigan associate head coach Rick Bishop, her primary coach at Michigan, had taken the head coaching position at LSU.

I’m so beyond excited to announce that I will be moving out west to finish up my NCAA eligibility. I feel so lucky to be able to pursue a masters degree at the University of California Berkeley, while continuing to swim at the highest level! Happy to be moving away from the snow for this new chapter! Go bears! 💙💛

Sources close to MacNeil’s decision tell SwimSwam that going to a single gender program was important to MacNeil. With the addition, Cal gets a huge boost for next season. MacNeil is a 2x NCAA Champion, having won the 100 fly and 100 free at the 2021 NCAAs. She’s the current NCAA record holder in the 100 fly with her 48.89 from 2021 NCAAs, and is the only women’s swimmer in history to have broken 49 seconds in the event. Additionally, MacNeil is the #3 performer all-time in the SCY 100 free. MacNeil was also a 2x Big Ten Swimmer of the Year during her time at Michigan

Outside of her collegiate career, MacNeil has been massively successful competing for her home country of Canada. She won the women’s 100 fly at the 2019 LC World Championships in Gwangju, South Korea, bursting on to the international scene. She then backed that up last summer, winning Olympic Gold in the event at the Tokyo 2020 Olympics. MacNeil would also win a pair of relay medals, bringing her Olympic medal total up to 3. At the SC World Championships in Abu Dhabi in December of 2021, MacNeil broke the World Record in the SCM 50 back, showing her versatility.

Looking at the rest of Cal’s roster, things are potentially looking great. Current Cal star Izzy Ivey is a senior, and if she graduates and decides not to take her 5th year of eligibility, MacNeil will be filling her spot as Cal’s top swimmer. If Ivey returns next year for a 5th year, MacNeil and Ivey would make one of the best 1-2 duos in the NCAA.

So does this mean that Teri isn’t going anywhere for awhile? I thought she was kind of on the cusp of retirement which is why their recruiting has been so lackluster lately.

Yes you mentioned this already

Mike bottom needs to do something. His roaster looks lackluster now. Is there any news about olivia carter? Is she staying or not?

Would have loved to see her at Tenn or UVA

Yes we all know you hate UVA

does anyone know what her major was?

On MI website, her major is listed as General Studies..

Congratulations to her. Great choice. I hope she takes advantage of the opportunities. Spending a year in the Bay Area is like checking dozens of things off the to-do list all at once.