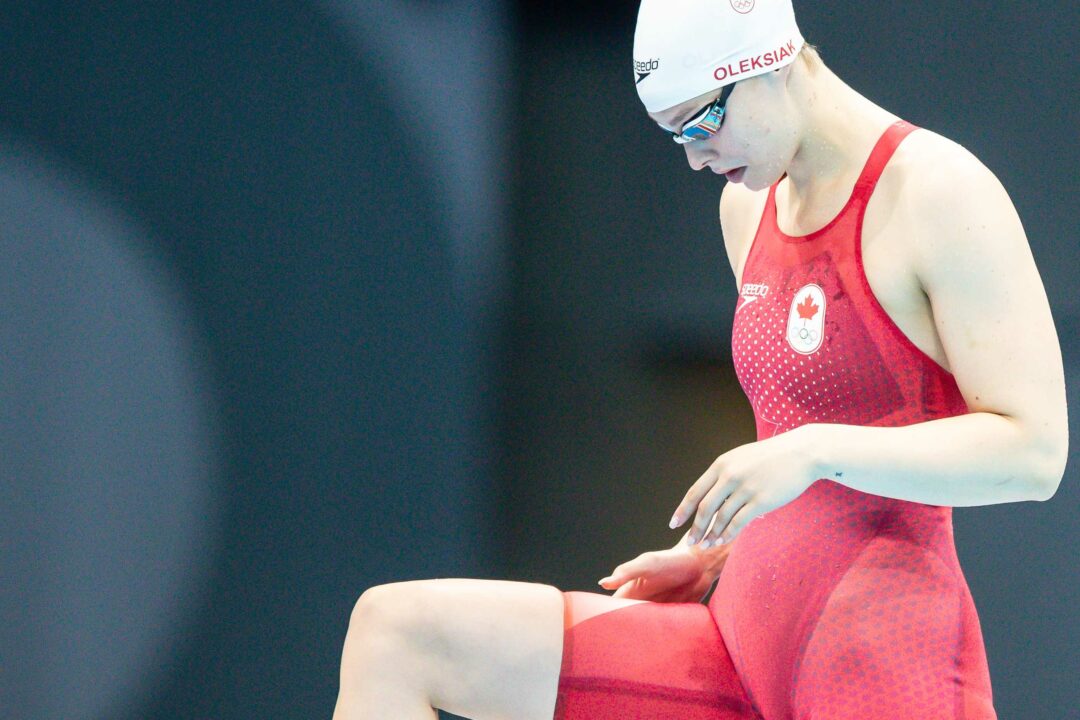 The second leg of the 2022 Mare Nostrum Tour is set to kick off in Barcelona on May 25. On the women’s side, there will be several big names joining the competition that were not present in Monaco, including Kylie Masse, Penny Oleksiak, Sydney Pickrem, Summer McIntosh, and Katinka Hosszu. Here are the biggest storylines we’re following at the meet.

In Monaco, the only notable name competing out of Canada was  Ingrid Wilm, who won both the 50 and 100 backstroke in dominant fashions over both fields. However, she’ll be joined by a much larger Canadian contingent in Barcelona that includes Olympic medalists Kylie Masse, Penny Oleksiak, Summer McIntosh, and Sydney Pickrem.

Masse, Oleksiak, and Pickrem are all competing for Toronto Swim Club at the meet, and should all contend for the podium in the respective events. Masse, the former world record holder in the 100 backstroke holds the top seeds in the 50, 100, and 200 backstroke events. She is also slated to swim the 50 freestyle, 100 freestyle, and 100 butterfly. Although she primarily focuses on the backstroke races, Masse could be hunting for potential relay spots at the Commonwealth Games with her other entries. Oleksiak, meanwhile, is only slated to swim the 100 freestyle, 50 butterfly, and 100 butterfly. Having shied away from the butterfly events internationally over the past few years, Oleksiak’s entries in those events are definitely noteworthy. Pickrem, who primarily focuses on the IM events, will swim the 50, 100, and 200 breaststroke along with the 200 IM, and 200 freestyle. She currently holds the 2nd seed in the 200 IM, placing her at the top of a very crowded field. McIntosh will race several of her “off” events at the meet, including the 200 IM, 100 freestyle, 100 butterfly, and 100 backstroke. However, the 15-year-old has been on a tear lately across the distance freestyle and IM events, which potentially sets her up for some big performances here as well.

American Lydia Jacoby had a very strong meet in Monaco, bouncing back after narrowly missing the US World Championship Team last month. In Monaco, she won the 100 and 200 breaststroke events, posting a best time in the latter of the two races.

In the 200 breaststroke, Jacoby has seen consistent time drops this season. After posting a 2:26.60 best time at the 2022 US International Team Trials last month, she followed with another personal best of 2:25.98 in Monaco. Although she will not be competing in any other major international competitions this summer, Jacoby could prove to be a force in this series if she continues to drop time. In Barcelona, she will face the likes of Sophie Hansson, Anna Elendt, and Lara Van Niekerk in all three breaststroke races, setting up for some great battles.

Star Sarah Sjostrom dominated the sprint events in Monaco, posting the top times in both the women’s 50 freestyle (24.08) and 50 butterfly (25.26). In both races, she won by wide margins of .82 and .62, blowing past her competitors. However, Sjostrom will not be swimming in Barcelona, which leaves both events wide open for somebody else to take. Frenchwoman Mélanie Henique looks to replicate Sjostrom’s dominance  as the top seed in both events, with times of 24.34 and 25.17, respectively. A captain for the French World Championships Team, Henique has been swimming very strong lately, holding the 4th fastest 50 butterfly time in the world for 2022.

Other contenders in the 50 butterfly include the aforementioned Penny Oleksiak, Marie Wattel, and Emilie Beckmann, while Anna Hopkin and Wattel stand atop the 50 freestyle.

One of the most anticipated races of the meet will come from the women’s 200 IM, which is slated to star a slew of Olympians, world record holders, and World Championship medalists. In fact, the top 6 seeds in the race are all seeded under 2:10, putting themselves in elite territory.

The top seed in the event is Great Britain’s Abbie Wood, the 4th place finisher in this event from last summer’s Olympic Games. Wood is entered with her personal best of 2:09.15 from Tokyo. Close behind her, the aforementioned Pickrem is seeded with a 2:09.24. Internationally, Pickrem holds a bronze medal in this event from the 2019 World Championships, where she finished behind Katinka Hosszu and Ye Shiwen. Although Shiwen won’t be swimming in Barcelona, Hosszu will also be in the field and ready to play her cards. The world record holder in this event, Hosszu is only seeded fourth with a time of 2:09.70. However, her world record and personal best stands at a 2:06.12, meaning she definitely has room to improve upon her seed.

Since the Tokyo Olympic Games wrapped up last summer, Hungarian superstar Katinka Hosszu has been relatively quiet on the international stage. Despite her continued success on the short course stage, Hosszu sat out of the 2021 ISL season and the 2021 Short Course World Championships. She made a few appearances at meets such as the Cope Heller Cup, the Hungarian National Championships, and the Acropolis Open, but has kept her event schedules limited, primarily focusing on the IM events, a far cry from the versatile lineups Hosszu has raced in the past that have allowed her to dominate series like Mare Nostrum.

Barcelona will be no exception to this recent trend, as Hosszu will only be racing the 200 and 400 IM events. She currently holds the top seed in the latter of the two races, while also holding the 4th seed in the 200 IM. Hosszu’s form here will be a strong indicator of her potential for this summer’s World Championships, especially given the strength of the field in the 200 IM.

Definitely looking forward to seeing what McIntosh can do especially in the 200 IM.

I think she holds age group records in the 200 medley and the 100 fly, so she should likely swim good times in both these events.

How was Team USA selected for Mare Nostrum? I remember that it was Junior athletes in the past. Gingrich isn’t a Junior and same with Spidoni… just curious.

People sign up individually for Mare Nostrum. There is no selection.

If you are an olympic or WC medalist LCM, Mare Nostrum pays for your travel (up to 750 $) and hotel fees.

If you’re not, you go on your own or your club pays for your travel. (which i think is the case for Coleman Stewart this year, Wolfpack elite sponsored his trip).

It features adults every year in the past, not just Jr national team members.

Wow so much wrong in two sentences.

I would liked to have seen more Americans at the meet:

They don’t need to travel to Europe so soon after trials.

MACNEIL, Margaret on the entry list of Women, 100m Freestyle

She backed out. Injury I think

Probably to test out how the injury has healed.