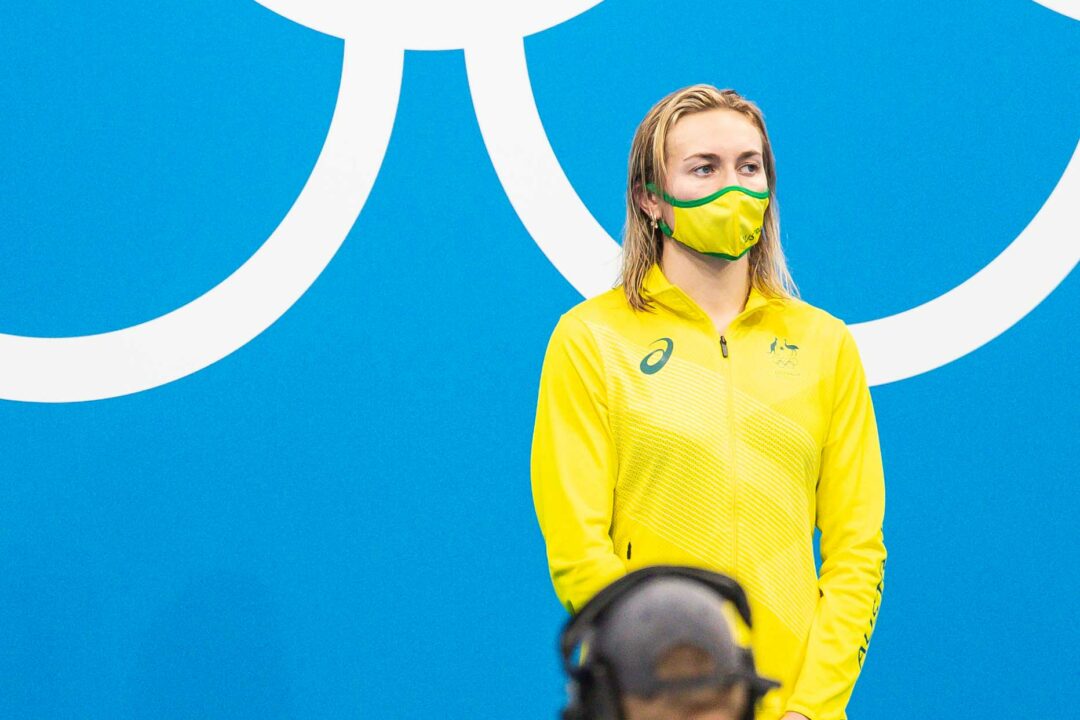 With her 2nd Olympic gold of the meet, Ariarne Titmus has put herself in the running for a record-breaking medal haul in Tokyo. Current photo via Jack Spitser/Spitser Photography

Ariarne Titmus and teammate Kaylee McKeown have been passing the Oceanian headlines back and forth thus far at the 2020 Olympics. As of day 4, the Australian duo represents the sole gold medalists for the country.

While McKeown collected gold in the 100 backstroke, Ariarne Titmus pulled ahead medal count-wise by taking her second gold medal of the meet of day 4 in the 200 freestyle. She now has 2 Olympic victories in the books, following her 400 freestyle win on night 2.

With the win, Titmus has become the third Australian woman in history to win more than one individual gold medal at a single Olympic Games. The only other women from the country to top the podium in more than 1 event individually at an Olympiad are Stephanie Rice who won gold in the 200 and 400 IM in 2008 and Shane Gould who won the 200 free, 400 free, and 200 IM in 1972.

Now that she’s tied Rice for second place in individual Olympic event wins at a single Games, she has a shot to surpass Rice and tie Gould if she’s able to come out on top in the women’s 800 freestyle. If Titmus won gold in 800, she would tie Gould for the single-Games gold medal record but would still trail Gould’s medal total of 5 from 1972. Along with her triple victory, Gould won silver in the 800 free and bronze in the 100 at the Munich Games.

So while she won’t be able to break Gould’s record of most medals won by an Australian woman at a single Olympics, there is still record a she could break in Tokyo. If Titmus pulls off the 800 free win and also contributes to a gold-medal swim in the 4×200 freestyle, she would become the first woman from her nation to win 4 Olympic golds (relay or individual) at a single Games.

Petria Thomas, Jodie Henry, and Stephanie Rice currently hold that record at 3 gold medals which they won in 2004, 2004 and 2008, respectively. Thomas and Henry were both on winning Australian 400 free and 400 medley relays in Athens in 2004. Thomas won the 100 fly and Henry the 100 free individually.

Titmus would need 1 more gold medal to tie the record and 2 in order to set a new one of her own.

The 1 record that Titmus won’t be able to break at this Games but could certainly set herself up for in the future is the record for most career Olympic medals won by an Australian swimmer. That record stands today at 9 Olympic medals which Ian Thorpe and Leisel Jones. Thorpe won 9 medals total across the 2000 and 2004 Games, while Jones collected her 9 career medals between 2000 and 2012. If we shifted this record to look at only career Olympic gold medals, or only at women, it would look like the following:

Should 20-year-old Titmus walk away from Tokyo 2020 with 4 Olympic gold medals, or even 3, she could certainly be well on her way to breaking all 4 of these records in the coming years.

The one woman she’ll need to look out for, however, is Emma McKeon who already has 6 Olympic medals to her name, including 2 relay golds. She still has another few chances to medal in Tokyo including the women’s 50 and 100 free, the 4×100 medley, and the 4×200 freestyle. Should she win a medal in all 4 of those events, she will break the record for most career Olympic medals by an Australian at 10.

Medals Table for Oceania Through Day 4

Petria Thomas also won 3 golds at Athens – 100 fly and the same 2 4×1 relays as Henry. Not sure where you guys get your stats from?!

“No men have won an individual medal for Australia thus far at Tokyo 2020.” Brendon Smith won bronze in the 400IM. Also, Jodie Henry’s medals come from Athens 2004 not Beijing 2008.

also mcloughlin in the 400 free

Titmus can’t break Ian Thorpe’s record for most career Olympic medals because Emma McKeon is obviously going to break it first and also put it somewhere out of reach for Titmus, who isn’t versatile enough to swim as many relays.

And Liesel has 9 medals as well….

Yes, McKeon is currently at 6 medals total with 2g, 2s and 2b. She could finish this week with 10.

Technically, she could finish the week with 11 in total, though a couple of those are admittedly a bit dicey (50 free, MMR).