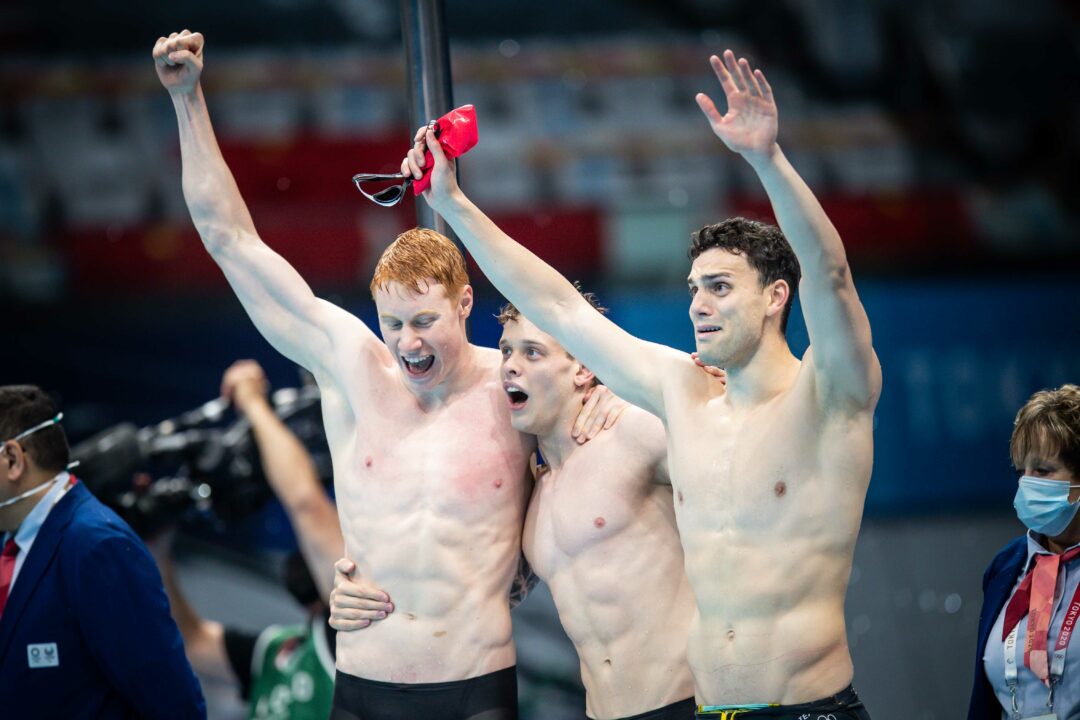 It was a perfectly executed race for Great Britain, who had 3 of the 6 fastest splits of the field to win their first gold in this event since 1904 Current photo via Jack Spitser/Spitser Photography

#5 – M 200 Fly: World record holder Kristof Milak backed up his world title, doing his thing and dominating the field in the 2nd 100, touching for his first Olympic gold in 1:51.25

#3 – W 1500 Free: After placing 5th in the 200 free, Katie Ledecky bounced back in a big way, getting back in the pool just over an hour later to dominate the first Olympic iteration of the woman’s 1500 and win gold, her first of these Games

#2 – W 200 Free: That race where Ledecky got 5th, Ariarne Titmus earned her 2nd gold in Tokyo, swimming a similar race to the 400 and coming back on the rest of the field in the last 50 to touch the wall 1st

#1 – M 4×200 Free Relay: It was a perfectly executed race for Great Britain, who had 3 of the 6 fastest splits of the field to win their first gold in this event since 1904 and come .03 within the super-suited world record held by the USA

BELLY FLOP OF THE DAY: USA Leaves Dressel Off Relay

Where was Caeleb Dressel? He should have been on the 4×200 free relay, even Michael Phelps agrees with us. Although USA put up some very solid splits, we’re confident they would have got on the podium with Dressel leading off. Would they have gotten past Britain? No way. But they get a medal with Caeleb on it.

HOT TOPIC OF THE DAY: Men’s 100 Free Final – What the heck is going to Happen?

The men’s 100 free depth is overwhelming, with 47.9 missing the final altogether. Caeleb Dressel is just 2nd seed with a 47.2, behind Kliment Kolesnikov‘s 47.11 European record. Mel says there’s too much speed in this field and Kyle Chalmers won’t even medal… I think he’s a fool and that the defending Olympic champ will absolutely put himself into the top 3. All will be revealed in this next finals session in what could very well be the race of the century.

Best swim or best race because that Milak 1.51.2 is still an absolute beast of a swim and is arguable the “best” relative to historic performances.

I hear you that it may be #2 in terms of historical times in relation to WRs and others’ performances… but Team GB’s time is .03 suited off WR, I maintain that for #1

They didn’t need Caleb Dressel for the relay to win a silver. They could have just used the top 4 from trials. Andrew Seliskar went a 1:46.1 on the prelims relay and was 4th at Trials. They replaced him with the 5th place swimmer at trials (who wasn’t on the relay in the morning) and who also added .4 in the 100free earlier in the night. The 1:47.3 split in finals on the relay was 1.2 seconds slower than Seliskar’s morning swim, and the difference between 2nd and 4th. GBR dominated.

Up vote. Absolutely true….but Dressel’s a 1:45 low flying start. And he’s got the base to pull that swim off…maybe even go faster. Still, no Seliskar is so odd. I am guessing we’ll learn the story behind the decision-making process in time… And Team GB deserve all praise–nearly breaking the super-suit WR.

But it is worth noting that they couldn’t change the relay (as far as I know) after Apple’s .4 add in his individual semis swim. I guess after a solid prelim 100 and his killer 4×100 anchor, they couldn’t foresee a 1:47.3… I definitely didn’t and they actually train and know him personally. Goes to show you why the coaches generally follow the textbook “top 4 swim at night” because they’re definitely kicking themselves over this right now.

It seems so obvious now but as far as I understand it after the 100 Free it was too late to sub Apple for someone else even if he wasn’t feeling good. Is that correct?

Agian in hindsight why have Apple do a tough double when Peroni and Seliskar are available and equally good? Coaches must have felt Apple has shown some relay magic at camp etc.

I think that USA(Apple) lost a medal by trying too hard for gold. Apple clearly wanted to handover a lead and went too hard in the first 100 to try to achieve that.