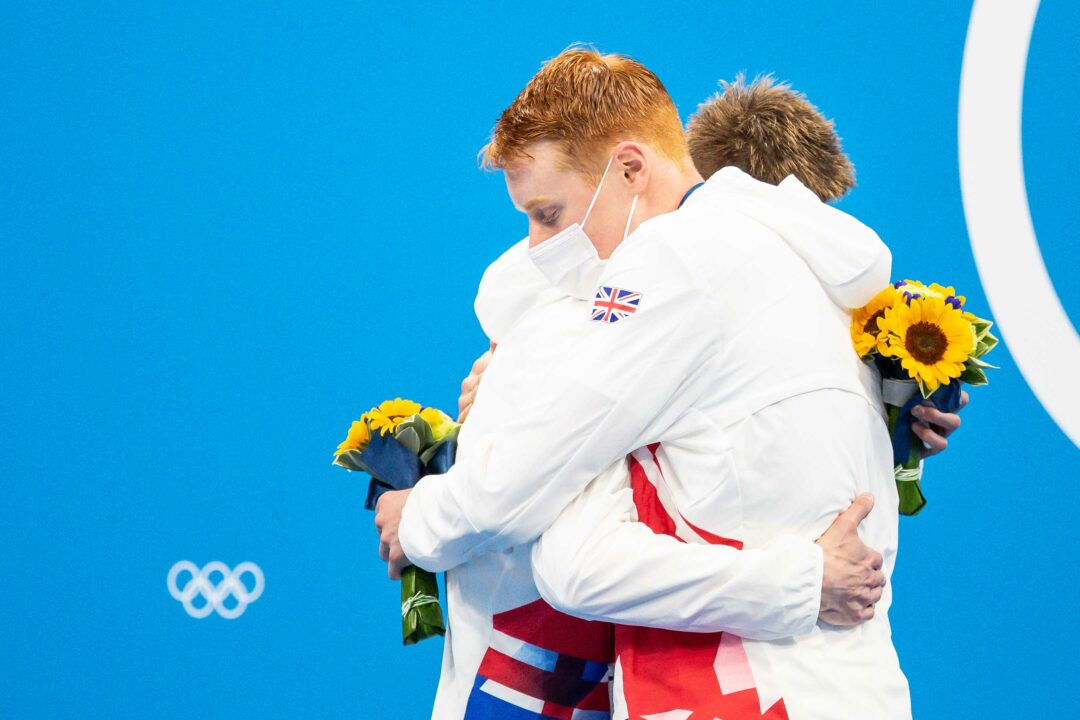 Great Britain registered the #1, #2, #6, and #16 splits of the morning, securing the gold medal by a margin of 3.23 seconds. Current photo via Jack Spitser/Spitser Photography

The relay of Tom Dean, James Guy, Matthew Richards, and Duncan Scott combined for 6:58.58 to win Great Britain’s first-ever gold medal in the men’s 800 free relay. They downed the European Record and narrowly missed the World and Olympic Records by a mere several hundredths of a second. Dean and Scott had earned gold and silver in the 200 free individual event on Day 3 with 1:44.22 and 1:44.26 and the expectations were high for their chances with the relay.

Martin Malyutin of the Russian Olympic Committee notched the second-fastest leadoff, going 1:45.69 to put ROC in second place and .03 ahead of Great Britain’s Dean (1:45.72) going into the first exchange.

Dean handed off to Guy, whose 1:44.40 was the fastest split among second swimmers by nearly a full second. Australia’s Kyle Chalmers (1:45.35) and USA’s Drew Kibler (1:45.51) were the next-fastest splits in the second position. Guy pulled Great Britain into the lead, where they stayed for the next 16 laps.

Scott produced by far and away the fastest anchor, going 1:43.45. Thomas Neill powered Australia home in 1:44.74, earning the bronze medal and nearly catching Russia for the silver. Townley Haas of the United States threw down a solid 1:44.87 but it wasn’t enough to catch Neill for a spot on the podium. Russia’s Mikhail Dovgalyuk went 1:45.23, which turned out to be just enough to keep Neill at bay.

Correction.
I wrote that GB was 0.02s off the world record. It was 0.03s.
Every hundreth of a second counts.

The decision to put Apple on the US relay was pushed by Ray Looze. This was despite Apple not having the 4th best PB and despite the tough double.

Apple, a previous IU swimmer was put on the relay by the IU coach. Favoritism, and the desire to bolster his own resume just cost the deserving USA swimmers a medal. I am sick to my stomach.

Tom’s almost as much of a novice as Matt Richards at this level. Scott, on the other hand, is well schooled, and Jimmy Guy’s practically the headmaster, Scott and Guy are arguably two of the greatest relay leg swimmers of the era. Dean will learn. He’ll have to, because it was clear how annoyed with himself scott was after the 200 – he was happy for his mate, but he knew that should have been his gold – even Tom’s clubmates thought it would be Scott here, then Tom in Paris. Scott’s not gonna let that lie.

What will be interesting is Scott, properly rested in the 200 medley, and what the management will do to handle the two medley… Read more »

No criticism of Tom Dean, just an observation that he looked like he had a bit of a gold medal ‘hangover’ (posting his slowest time of the meet) whereas Duncan Scott looked like he swam his leg angry

Ban the use of the word lap(s) for swimming. Since it is defined as one length (or two.) What a terrible word that means two different things. Even at my old age I could do two laps faster than 1:42.00

Apple was out-split by all lead-off swimmers and all but four other swimmers (two Brazailians, 1 Swiss swimmer and 1 German swimmer).

What Peaty and Guy have done for British Swimming unreal they put us back on the world stage after team GB had a poor showing in our own home Olympics in London. After his agonising 4th place in Rio in the 200m freestyle to see his joy for his countrymen and friends to go 1-2 4 years later was beyond beautiful. And then to drop two 1:44s to ensure his team their first relay gold in 113 years remarkable nothing but love for our Jim bob.