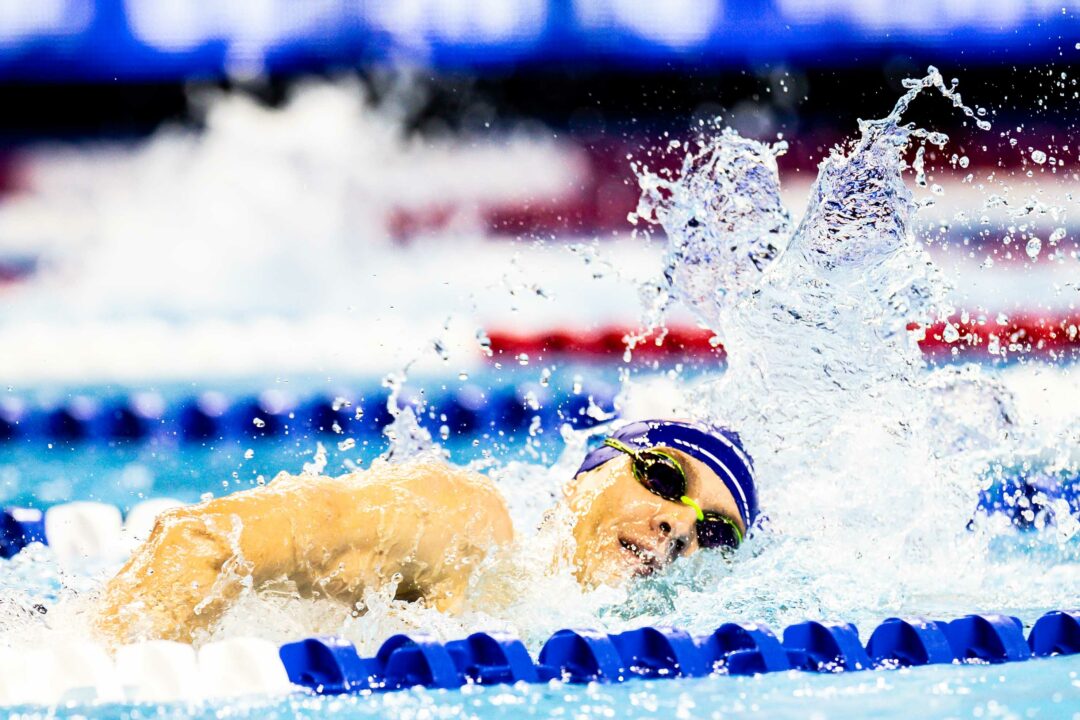 Bobby Finke captured the USA men's first Olympic distance gold since 1984 this week, and he did it twice, sweeping the 800 and 1500 freestyles. Current photo via Jack Spitser/Spitser Photography

The last time the US men won a 1500 free at the Olympics was 1984, when Mike O’Brien and George DiCarlo took gold and silver. Three short years later, a character from a classic film uttered these famous words that could arguably apply to US men’s distance swimming in the 37 years since the Los Angeles Games.

It only so happens your friend here is only mostly dead. There’s a big difference between all dead and mostly dead. Mostly dead is slightly alive.

Coming into this week, the US men hadn’t won a single gold medal in the 400, 800, or 1500 free at either the Olympics or long course World Championships since 1984. There’d been a smattering of silver and bronze, but fans and pundits alike wondered what was going on with the US men, especially when Katie Ledecky was dominating women’s swimming the last 8+ years and racking up the golds.

When analyzing the US men’s lack of distance of distance success, some have blamed the NCAA system, which prioritizes the sprint events. We’ve seen some incredible speed in the 500 and 1650 free, but recent U.S. Open Record holders like Clark Smith and Zane Grothe hadn’t translated that speed into medals at major international meets. Some have blamed US club coaches for pivoting from mega-yards training to more race-paced training. Some pointed to Ledecky’s success and said it indicated that the men’s downturn was merely a cyclical dip.

Whatever the reasons, tonight Bobby Finke put the discussion to rest for at least a time, as he stormed home on the final length of the 1500 free to bring home the first gold in the event in 37 years, and touch in a time of 14:39.65. It wasn’t an incredibly fast race, as the last two Olympic gold medal times were 14:31.02 (2012) and 14:34.57 (2016). Instead, it was a tactical race, as Finke held pace with Mykhailo Romanchuk and Florian Wellbrock most of the way, then shifted into a high gear over the last lap. To put Finke’s closing speed into perspective, his final split of 25.78 was faster than any non-leadoff split in the final of the men’s 200 free this week. Sun Yang, when he set the world record in 2012, closed just slightly faster in 25.68.

As it stands, Finke is now the 2nd-fastest American of all time, just behind Connor Jaeger, who went 14:39.48 at the 2016 Olympics en route to silver. Finke’s time also moves him just inside the top ten worldwide all-time.

Finke has long been a promising distance swimmer, with a solid long course pedigree as a teenager. He won this event at the 2016 Junior Pan Pacific Championships and made the senior 2017 World Championship team before he had graduated high school in 2018. As a freshman at the University of Florida, he was initially named to the 2019 World University Games team before having to withdraw due to a wrist injury. The next year, he began to make his mark on the yards record books as he demolished the U.S. Open Record in the 1650 at SECs.

While Finke hasn’t quite broken that record yet, he notched 14:12 on two more occasions — at this year’s SEC and NCAA Championships. Although, even his SEC performance this year wasn’t without drama, as he was spotted walking around on deck with a walking boot just before the championships commenced. Whatever the injury may have been, it doesn’t seem to have caused much of an issue for Finke.

We’ve made this far into the article without mentioning that Finke also won the inaugural Olympic men’s 800 free earlier this week, making him one of a handful of US men over the last few decades to win two individual gold freestyle medals in the same Olympics.

Finke’s Florida teammate, Kieran Smith, picked up a bronze medal in the 400 free this week. Coupled with Caeleb Dressel’s 50/100 free sweep, University of Florida, current or alumni, accounted for all five of the US men’s individual freestyle medals in Tokyo, helping provide some much-needed stability to what’s been a week of ups and downs for the US men’s team.

It’s too soon to tell whether the US men’s distance success this week will prove to be merely an outlier, or whether Finke and Smith will help lead a whole new wave of US men to distance excellence at the international level. Whichever way the future lies, for now, the USA men’s distance swimming is not all dead, or even mostly dead. Tonight, it’s fully alive.

I watched his stroke during the 1500 and I thought about some of the relaxation videos I watch to help me get to sleep. So smooth and hypnotic.
BobbyFinkeASMR. Bobby you should do it.

Between him and the sandpipers of Nevada American distance should be in good hands for a while. Hopefully Nesty can develop some more elite distance guys

Interesting that Nesty, a sprinter, did so well with a distance guy. The sprint-focused NCAA will not change distance swimming in the US but club teams can. Club teams like Mission Viejo in the 1970s and 1980s, produced the previous crop of golds, Sandpiper has a good supply of distance swimmers now, what American gold by Finke and Ledecky will do is inspire young club swimmers and their coaches for 2024 and 2028. Speed training only has also shown its vulnerabilities. The future looks bright.

Is it interesting if you know Nesty and how he trained.

Swimswam did you just make a reference to Megamind? I love this website

in megamind when metroman says ‘my death was greatly exaggerated”, but honestly it might be a reference to the princess bride that megamind also did

Yes, the clue was the author said “classic” film!

Megamind is a classic.

Mark Twain’s exact quote – which he penned & which ran in an article that ran in the New York Journal on June 2, 1897 – is “The report of my death was an exaggeration.” That doesn’t change the fact that later versions (using demise, grossly exaggerated, etc.) still sound good. https://www.mentalfloss.com/article/562400/reports-mark-twains-quote-about-mark-twains-death-are-greatly-exaggerated

That all said, yes, IMHO reports of the demise of distance swimming in the USA are indeed exaggerated.

Hemingway borrowed it, too.

It is a crime to neglect Ron Aitken

What does Aitken have to do with the Men

How did Florida vs California go?

In terms of medals, on the men’s side, Florida in a stomp?
Honestly a dual meet might be closer, in coming years, than in past. UF is on the up.

You say it wasn’t an incredibly fast race, as the previous Olympic years were 14:31 and 14:34, then say he’s now the second fastest of all time, and the list doesn’t include those two times at all. Which is it?

*second fastest of all time for Americans﻿

The previous fast Olympic times were from a doper

Finkes 800 was my favorite swim of the meet. I couldnt believe what i was seeing at the end. I wonder how fast he could have gone in both his events if he didnt swim such tactical races. Really excited to see what the future holds for him.