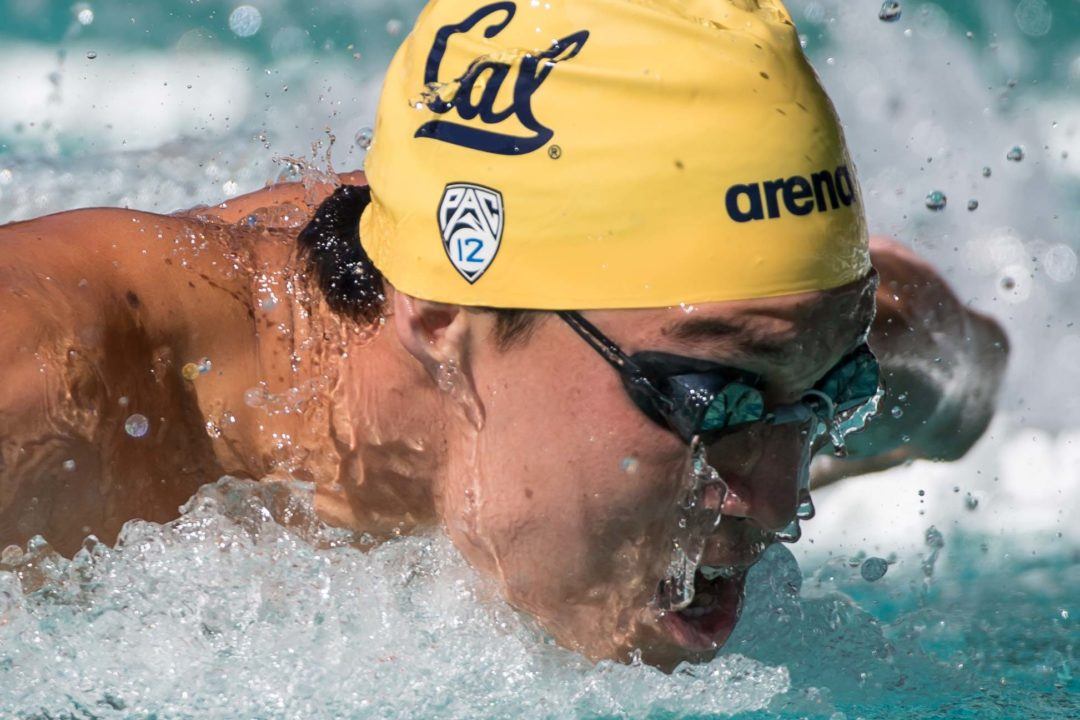 Per the request of some of our commenters, we’ve gone through and scored out how the men’s NCAA team battle would go based on the midseason rankings. Archive photo via Mike Lewis/Ola Vista Photography

We’re now through the second round of NCAA midseason invites and it’s time to take a look at where the division 1 teams stand. Per the request of some of our commenters, we’ve gone through and scored out how the men’s NCAA team battle would go based on the midseason rankings. This article only discusses scores based on the men’s rankings, which you can find here. We’re currently working on the women’s version, which will be posted soon.

It should be noted that a handful of teams were without some of their best swimmers, but those swimmers are expected to be back in action in the second half of the season. For example, Florida only had Caeleb Dressel for day 1 of the Purdue Invite, but didn’t get a chance to swim the 100 fly or 100 free individually as he had to tend to a personal matter. Georgia’s Gunnar Bentz and USC’s Carsten Vissering were absent altogether. These guys will not only add plenty of individual points for their respective teams, but they’ll also make a big difference on relays.

Texas is fortunate to have divers

And not have to even try at their conference meet, PAC 12 is by and far the toughest conference

wait until the end of the year Georgia will be… U of A has been way off the last 3ish years but ASU has made up that slack. Pac 12 is solid but after those 4 teams they have few national points scored. As far as total depth at conference level SEC is definitely the superior one.

Florida, Georgia, Auburn, Alabama, Tennessee, Missouri, Texas A&M, South Carolina, all top 20 Teams and LSU and Kentucky are the only other ones, both of whom had NCAA qualifiers and multiple people close.

Cal, Stanford, USC, and ASU are the only top 20 teams but UofA does have a few solid guys, Utah has one or two

So since there are less swimmers because PAC 12 schools are harder to get into than SEC schools, SEC is better?

the original statement was that “pac 12 is by and far the toughest conference”
one could argue that having fewer entries and fewer schools with fewer people fighting for finals would make it easier to make it back, which is why SEC might be a tougher conference
no one said anything about how easy or hard it was to get into an sec or Pac 12 school or how that has any affect on the competitiveness of the swimming for the conference

*Based on 2017 Final NCAA finishes

Does Cal “have to try” at PAC 12’s? If you have your team fully qualified anyway it seems to me you’d be willing to sacrifice winning your conference in order to win an NCAA title. You think Alabama will care that they didn’t win the SEC if they end up winning the national title? (Football). Conversely, you don’t think Georgia would give up that shiny SEC trophy if they could be guaranteed the National Title?

8
-3
Reply
JP input is too short
Reply to  Gator

I think the point isn’t that other teams win PAC12s, but more that if Cal thought emulating Texas’s conference strategy would win them more national titles, they might consider conceding PAC12 titles to do that.

Part of it being that yes Cal wins the most races at Pac12s and puts up the most nationally ranked times but pound for pound, Stanford is better geared for a Pac-12 title (at least in recent years). With a squad of just over 20 guys compared to the larger Cal team, Stanford has a better ‘quality’ (other than breaststroke). From my understanding, there is a set limit at Pac12’s (including divers) yielding a higher aggregate per individual for Stanford

1
-1
Reply
JP input is too short
Reply to  Jimbo

Generally it’s 18 scorers for a conference team, with divers counting for a third of a person. If I remember correctly. Though that was D2 without platform diving, maybe divers count for more in D1?

Conference Championship roster sizes (and diver counting rules) are based on rules by conference, not division.

I think Cal stopped caring about the Pac12s a couple years ago.

Cal, Stanford, and USC quite clearly don’t rest their top guys for Pac12s judging by the improvements seen by them from conference to NCAAs. So it’s a pretty fair competition… Just because Cal hasn’t won for a few years doesn’t mean they’re not trying. And just because Stanford/USC have been winning doesn’t mean they’re going all out for conference and suffering at NCAAs.

Didn’t Cal literally send their top 3 swimmers to Orlando two season ago instead of Pac12s?

That was an Olympic year so made sense. But Durden does understand, NCAAs is the BIG Dance and if not putting emphasis on PAC 5’s, then so be it! Texas has their meet earlier and not a whole lot of emotional energy needed for them to win conference

Pac 12 is the toughest by far in terms of trying to win conference and do well at NCAAs, there is just too little time in between.

0
0
Reply
Horninco
Reply to  Swimmer A

Is it illegal for Cal to recruit divers?

Cal finally got dive platforms with their new training facility. I don’t think many elite divers like to train outside in Northern CA weather. Just a guess.

Stanford’s success might dispute the concerns about the weather. For the right coach, anyway.

True but take into account the Bay Area can be a hodge podge of microclimates. Palo Alto & the Pennisula enjoy plenty of sun relatively speaking. Berkeley OTOH tends to be more affected by the SF fog… 🙂

In keeping with the culture of NORCAL, firepits will be placed at the edge of all platforms during the winter months…

0
0
Reply
Buona
Reply to  Swimmer A

Can someone enlighten me? Based on NCAA 2017, if divers are not included, which team will win?

According to this, Cal should win this rather easily. Same system last year had Cal winning by 80+. Cal looks to be in better shape than last year. You also have to think they won’t have the rash of DQ’s and bad swims they had last year either.

same system? UT would have won NCAAs with or without diving last year. This year should be close with swimming points alone, and I’d probably give an edge to Cal, but IMO Texas has the edge with diving points added in. No reason to take the fall results as definitive when teams prepared in all different ways and none of the big teams did a real taper. Having said that, if Dressel hadn’t gone home from his invite early, Florida would have another 40+ points in this predictor, and the top 4 teams would be in the top 4 slots here. So it’s not meaningless. As far as relays go… they all look pretty close, to me.

The one that scores the most points, including diving.

Thanks to the Swimswam staff for this! Each of the last 2 years, I thought Cal had a chance, and the Texas divers might be the difference. This year, that may finally be true. Shebat and Robert’s need to come on strong for Horns to have a chance. 119 points is a lot to make up. Divers might score 30-35
points. Where do the other 80 points come from?

I think that a lot of the Texas relays still have room to grow. Particularly the 400 medley, which, while the B beat the A, the best splits were pretty much split even on both relays. Cal is ranked first in 4 out of 5 relays, something which might not hold up. Furthermore, remember that Texas doesn’t have to gain points, Cal can also lose them. If Cal falls, and Texas remains constant, that could make a difference.

Let’s not forget cal is up by an extremely narrow margin on their relays. For most of them it is pretty much a toss up between the big 4 once dressel is there and I think cal is 4th at best in the 800 free. I think relay points will be close to negligible when determining the champ because points will come out close to even for the big 4.

Texas is gonna struggle without a breaststroke. Especially in the 4 medley.

they all have to have one they leave the big dogs off anyways. Besides Cal, who may actually be able to have all 5 relays at full strength, as I dont think they have any one swimmer who would even make all 5 of there relays

Texas has 2, possibly 3 divers who should score. Their Freshman, Jordan Windle, a two time World Championship qualifier and four time Sr. National Champion, should be very strong. Texas may score 30-50 points in diving this year.