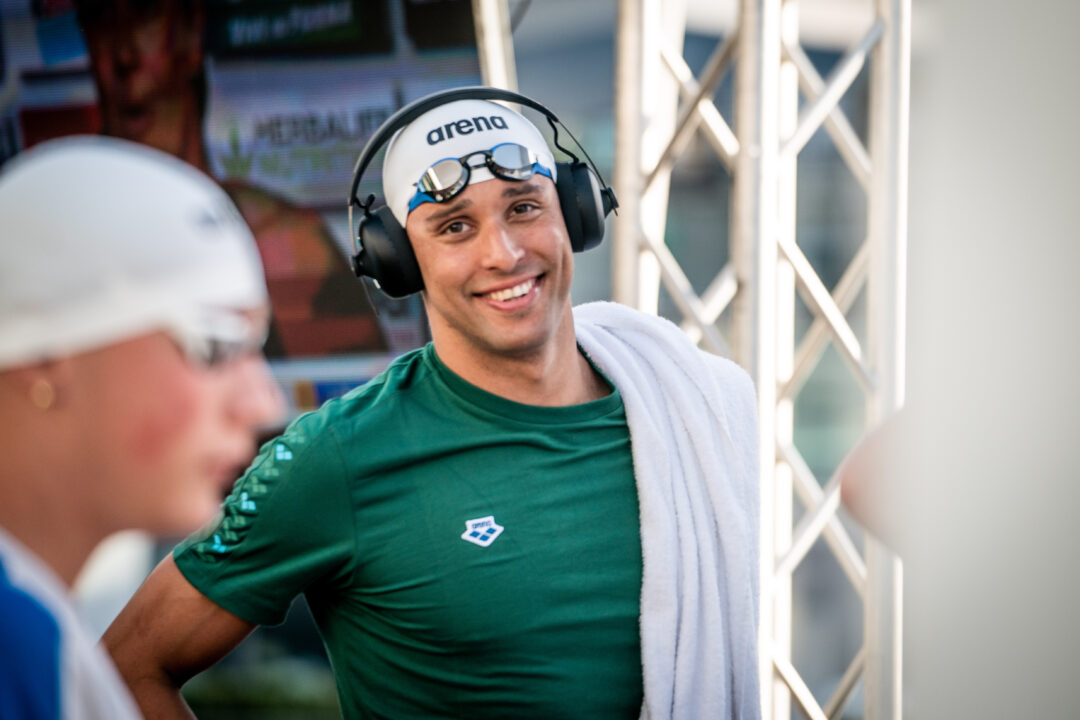 South African Chad Le Clos finished 16th in the men's 200 butterfly prelims, escaping an unceremonious elimination by less than a tenth of a second. Archive photo via Mine Kasapoglu

Despite it being the tamest session we’ve seen thus far in Tokyo, some interesting storylines still emerged during Day 3 heats from the Olympic Aquatics Centre, including a pair of former Olympic champions finding themselves in outside lanes for their respective semi-finals.

South Africa’s Chad Le Clos opened his 2020 Olympic campaign with the prelims of the men’s 200 butterfly, getting out to a hot start in the fifth and final heat as he turned with the leaders in a time of 54.07 at the 100.

Le Clos then faded over the second half of the race, closing with a split of 31.43 to finish fifth in the heat in a time of 1:55.96. The juxtaposition between Le Clos and reigning world champion Kristof Milak was clear, as the two swam side-by-side, with Milak effortlessly pulling away from the field over the second 100 while Le Clos slowly faded back.

The 2012 Olympic champion in this event at the age of 20, Le Clos is now 29, making him the second-oldest swimmer in the field, and this may well be his ‘last dance’ in the 200 fly.

Earlier this year, he said he was planning to shift his focus away from the 200 fly and towards the 100 free post-Tokyo, and unless he’s able to find some form in the semi-finals, it could be his last major international swim in the event for his career.

Le Clos qualified 16th into the semis, eight one-hundredths ahead of Germany’s David Thomasberger (1:56.04), who was actually in the lane next to Le Clos and had very similar splits the whole way through.

As for the rest of the meet, Le Clos will be forced to put all of his eggs in the 100 fly basket, where he’s won back-to-back Olympic silver medals. However, based on the recent dominance from Caeleb Dressel, the rise of Milak, and the overall improvement we’ve seen in the event of late (four others in the field have been sub-51 this year), Le Clos will need to pull a rabbit out of his hat to get back on the podium. It will likely require a sub-51 swim to medal, something Le Clos hasn’t done since 2018.

Reigning back-to-back world champion and 2008 Olympic gold medalist Federica Pellegrini didn’t have the same closing speed we’ve become accustomed to seeing from her in the women’s 200 free prelims, turning third at the 150 in Heat 3 but falling to fifth at the finish in 1:57.33.

Pellegrini ended up 15th overall, meaning she’ll be out in Lane 8 in the second semi-final, but she wasn’t really at risk of failing to advance, with the 16th-place swimmer exactly one second behind her.

Nonetheless, the 32-year-old Italian will have her back against the wall in the semis if she wants to move on to a fifth straight Olympic final, likely needing to be at least a full second faster than she was in the prelims.

It’s worth pointing out that Pellegrini was only a half-second faster, 1:56.81, in the heats at the 2019 World Championships before ultimately winning gold, but the way she was outmatched over the last 50 in her heat was uncharacteristic.

Needing to bounce back after a disappointing showing in the 400 individual medley on Day 1, Katinka Hosszu willed herself to do just that in the women’s 200 IM prelims, but it looked like it was anything but easy.

Hosszu ends up qualifying second overall for the semis, and offered a nod of approval after seeing her time, but it looked like a real hard 2:09 for someone who has been more than three seconds faster.

Given the recent changes to her training, along with the fact that she’s now 32, her fifth-place finish in the 400 IM wasn’t necessarily shocking. And after only managing bronze in the 200 at the European Championships two months ago, she’s now at risk of losing all three of her Olympic titles here in Tokyo (Hosszu also won 2016 Olympic gold in the 100 back, which she chose not to contest in 2021).

On the other hand, Walsh looked smooth in what was her first-ever Olympic swim, and the same goes for her American and University of Virginia teammate Kate Douglass, who glided her way to the top time of the session in 2:09.16.

Nathan Adrian found himself in the same position in the 100 free in 2016, if memory serves me right. Where there’s a lane, there’s a chance!

Masterful swim by King Chad getting the outside lane that he loves.

Line on le Clos coming in was +10000, so I put a buck on that for sure. (Not feeling very confident I’m getting that dollar back tho.) Got a +5000 line on Pellegrini and I mean, she’s snuck her way into a win enough times that I feel like there’s actually chance there.

Le Clos looked like he had two pianos on his back…..will be hard for him to make the final.

I believe Le Clos could still be in the mix if he got a real coach and fixed some (many) things technically. I can’t imagine this guy’s training has advanced that much from 9 years ago. He’s an old man now.

He has changed coaches since 2012

I was super interested to see what the Aussie trials being closer to the Games looks like. For sure the sprinters look great, but the 200+ folks (aside from Titmus) maybe not so much.

They are having great olympics so far , just 2 medals behind the US

Neil only missed the men’s 200 free final by 0.03 and his mainly a distance swimmer so I think we’ve got to wait for the 1500 to see what form he truely is in