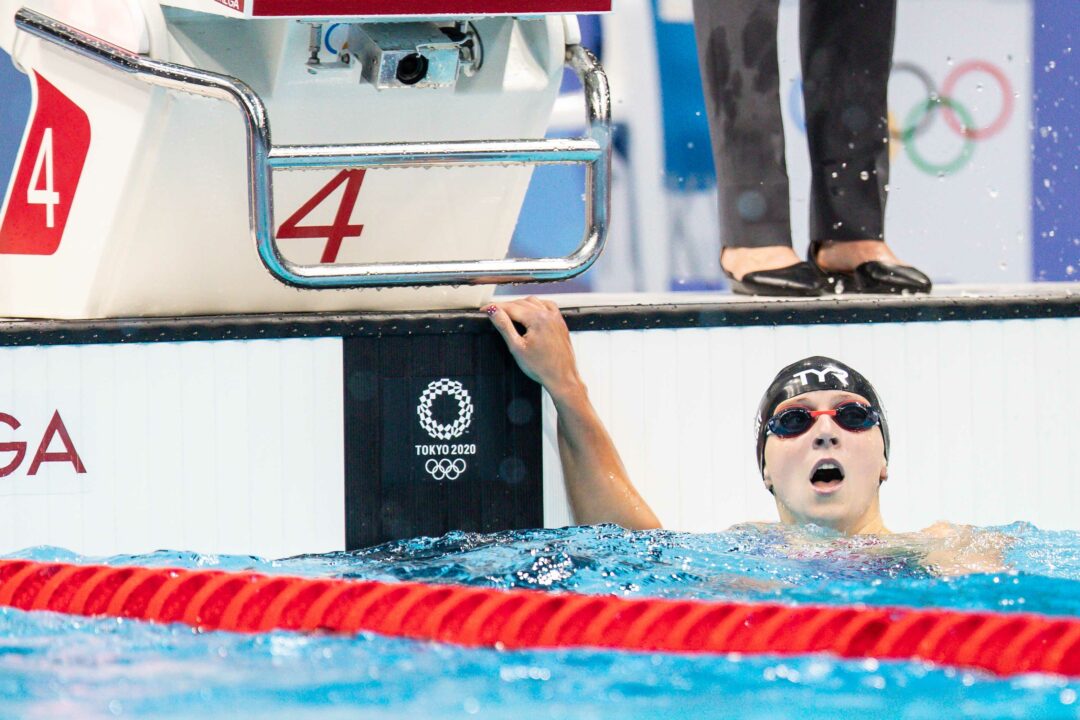 During the event's Olympic debut, Katie Ledecky threw down the 8th fastest performance in history with a 15:35.35 prelim swim. Current photo via Jack Spitser/Spitser Photography

Katie Ledecky came away from day 3 prelims at the Tokyo 2020 Games with the official Olympic record in the women’s 1500 freestyle. Ledecky capped off the first-ever round of 1500 prelims at an Olympic Games with a 15:35.35.

The swim for Ledecky was 15 seconds over her 2018 world record in the event of 15:20.48 and is her 8th fastest swim on record. Ledecky will go into the final as top seed and will be attempting to collect her first gold medal of the meet. During day 2 finals Ledecky took silver in the women’s 400 freestyle, hitting a 3:57.36 to Ariarne Titmus‘ 3:56.69.

Based on the results, we know that Ledecky was the only woman who recorded an Olympic record in the event, even though the 4 heat winners who swam before her each recorded the fastest-ever women’s 1500 free at the Games.

In the first heat of the meet, Katrina Bellio of Canada completed the first-ever women’s 1500 at the Olympic Games in a 16:24.37. That swim made her the unofficial Olympic record holder but wasn’t good enough to get her a spot in the final, ranking her 21st overall in the heats.

During heat 2, 20-year-old Austrian swimmer Marlene Kahler managed to bring the unofficial Olympic record down a 16:20.05. Kahler improved upon her own PB in the event which sits at a 16:21.52 from earlier this year. That 16:21.52 was not only a personal best for Kahler, it was also an Austrian record. Kahler also missed out on qualifying for the final as her 16:21.52 national record was the 19th fastest time overall.

By the time heat 3 came and went, Hungarian teen Viktoria Mihalyvari-Farkas had nearly swum the first sub-16:00 Olympic 1500 freestyle when she hit a 16:02.26 to set the 3rd unofficial Olympic record of the session. Mihalyvari-Farkas’ swim was a solid PB, improving upon the 16:14.12 that she delivered at the 2021 European Swimming Championships. Mihalyvari-Farkas, like Bellio and Kahler, failed to qualify for the final as her 16:02.26 gave her a 12th place finish.

One heat before Katie Ledecky‘s first official Olympic record, her teammate Erica Sullivan brought the field under 16 minutes for the first time with a 15:46.67 heat win. Sullivan swam the majority of the race with 2019 World Champion Simona Quadarella but managed to pull away towards the end, leaving the Italian for 2nd place with a 15:47.34. Unlike the 3 heat winners before her, Erica Sullivan‘s swim was fast enough to advance into the final. Sullivan will go into the debut women’s 1500 freestyle final as 3rd seed, trailing Ledecky’s 15:35.35 and Wang Jianjiahe‘s 15:41.49 Asian record.

On a very few occasions I agree with Smith-King-Huske-Manuel. Not with listed swimmers but with the person who hides behind big names 😀
But in the case of his evaluation of Meehan’s job of coaching Katie Ledecky this person has my support.
Whenever a swimmer succeeds his/her coach receives immediate recognition as well.
Nobody asks questions if there was any contribution of this coach to swimmer’s success. At Russian Nationals they even began to call coaches to the podium next to the swimmer.
Then I think that in the opposite situation when a swimmer fails the coach has to share the negative consequences. Automatically to full extent. As his failure too.

All these posts (including some of mine’s) about Katie Ledecky’s achievements and awards, about her influence and contributions to the competitive sport sounds like obituaries. Guys, she is still alive and in the great form showing her bests after Rio Olympics (with the exception of world record in 1500 in 2018). She has already Olympic medal at her third Olympic Games and will have more. Her prospects for the next Olympic cycle looks promising.
You don’t know what coming years bring us and at what shape the competition in Ledecky’s event will get. Look at Sjostrom’s story: not really satisfactory results in freestyle events at Rio and then later in a few months mind blowing world records. What I… Read more »

That said, she does have the 200 final about an hour before the 1500 final, which is a pretty tough double (though one that she’s been training for).

The 8:14.63 barrier has not been broken in the women’s 800 meter freestyle since the 2012 Summer Olympics, that is aside from Katie Ledecky.

that’s crazy, I knew that Adlington still was the second fastest performer ever from Beijing but I never realized that no one has even beaten Ledecky’s time in London

Watch for Titmus in the 800. Maybe not good enough to beat Ledecky, but will easily beat Adlinton’s time.

Top four US trials times would have made finals. It will be the Sandpiper show when KL retires.

Was hoping she would cruise through prelims of the 200 free and attack the 1500 and go for the wr it seems like the best idea it’s at night like most finals and she won’t be coming off a very close race in the 200.

Kind of odd splits from Katie on this morning swim. From 400m she oscillates by in some cases more than .5 per 50 on alternate lengths. I think we have seen her do this before…but also she has some swims where she is metronomic so I am wondering how intentional this is.

Interestingly her quicker lengths are when she is going away from the starting blocks – and breathing AWAY from the almost-too-close Wang.

I would have thought she’d be quicker when she can have a better look at Wang’s position and respond with a bit of engine-revving. But perhaps it’s the opposite–she banks a few extra tenths on the 50s to make sure Wang isn’t creeping in… Read more »

Why is only KL’s record recognized?

They should all get records.

I’m not sure, but it’s likely because the olympic record is created at the end of the event when ALL SWIMMERS have completed prelims. By then, Katie was the only one who OFFICIALLY set the record. OR, the others DID set the record, but because it was never written on omegatiming or any other location by the time the event was over, it basically doesn’t count as being ‘official’. Either way, it really doesn’t matter. It’ll be broken tomorrow as well.

all the buzz yesterday was talking about how the women’s 100 back OR got broken 4 times in one (2 technically) day.3 times in prelims.

It seems that back around 1988 when new events were added to the Olympic swimming programme, they only ratified the fastest time after all the heats.

Before this – back to the 60s or the 1910s if new events were added, anyone who swam the fastest time in the heats (from h1 to whatever) was credited with an OR if their time was faster than the previous time.

On the one hand, that makes sense.

On the other hand, the heat 1 winner was certainly, at the time, the fastest in Olympic history and it’s totally legitimate to give her the Olympic Record. Even if they she only had it for a quarter of an hour, that’s still a pretty cool accomplishment. This is one of those situations where being technically correct should definitely count as being actually correct (if I were Katrina Bellio, I would absolutely put “Former Olympic Record holder” on my CV when she starts applying to places in a few years).