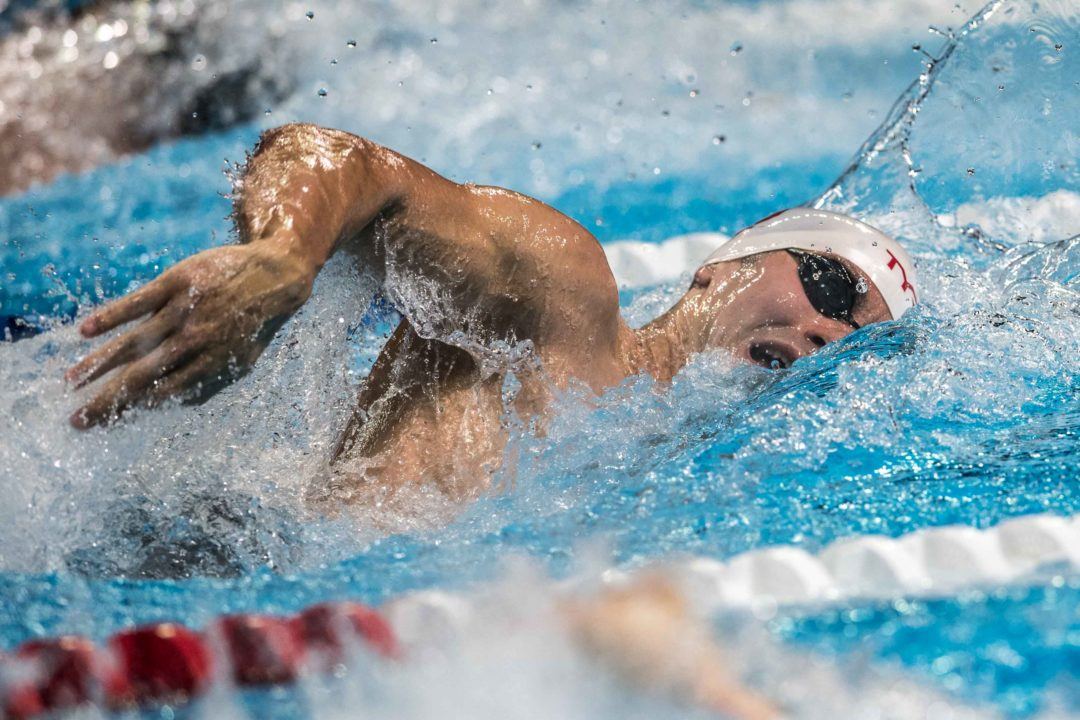 As the Italian and American line-ups feature an all-star line-up, Great Britain could have strong challengers to take down their 2 consecutive world titles. Stock photo via Mike Lewis/Ola Vista Photography

The men’s 4×200 relay line-ups are officially released as a high-stakes final looms around the corner. The 2-time defending champs, Great Britain, will have to fend off top 4 prelims seeds Italy, Russia, USA, and Australia to continue their winning streak.

The British have tossed in freestyle pros Duncan Scott and James Guy alongside Calum Jarvis and Tom Dean for a lethal quartet out of lane one to defend their world title. In prelims, Dean lead off with a 1:47.34 while Jarvis split a 1:45.94. In the 200 free final, Scott tied for the bronze medal with a 1:45.63 while Guy is a 1:45-capable swimmer as well.

Zach Apple and Andrew Seliskar swam 1:45-mids in the prelims, earning them a second relay swim and showing their true relay potential. Replacing Jack Conger and Jack LeVant are 100/200 free specialists Blake Pieroni and Townley Haas. While neither Seliskar or Haas advanced into the 200 free final, both have proved they are capable of splitting sub-1:46. Pieroni, alongside Apple, have become newly-minted American relay assets as they aided the USA to gold in the 4×100 free relay.

The Aussies have kept the two fastest 1:46 prelims swimmers, Alexander Graham and Mack Horton, for the relay final. The remaining spots went to 200 free finalist Clyde Lewis, who went 1:45.78 in the final, and sprinter Kyle Chalmers. The Aussies will be in a tight race for a medal as two other relays are right on their tail.

For the Italians, distance stud Gabriele Detti will join the relay for the final. In prelims, the remaining members of Filippo Megli, Stefano Ballo, and Stefano di Cola were all within the 1:45-1:46 range. With the addition of Detti, the Italians could be major medal threats.

Russia will have a tight race with the Italians as their prelims swimmers of Mikhail Vekovischev, Mikhail Dovgalyuk, and Aleksandr Kransykh were also in the 1:45-1:46 split range. Martin Malyutin will be joining the Russians in the final and could be able to replace Ivan Girev‘s 1:47.01 split from prelims to challenge the rest of the field.

I do not agree with this American line up. Needs Dressel

USA made a mistake not swapping seliskar for Dressel

why is Australia putting Horton on the anchor leg? Horton has swum a lot of awful 200m relay splits (incl 1:48s when he has a 1:45 flat start)

happy to be proven wrong!