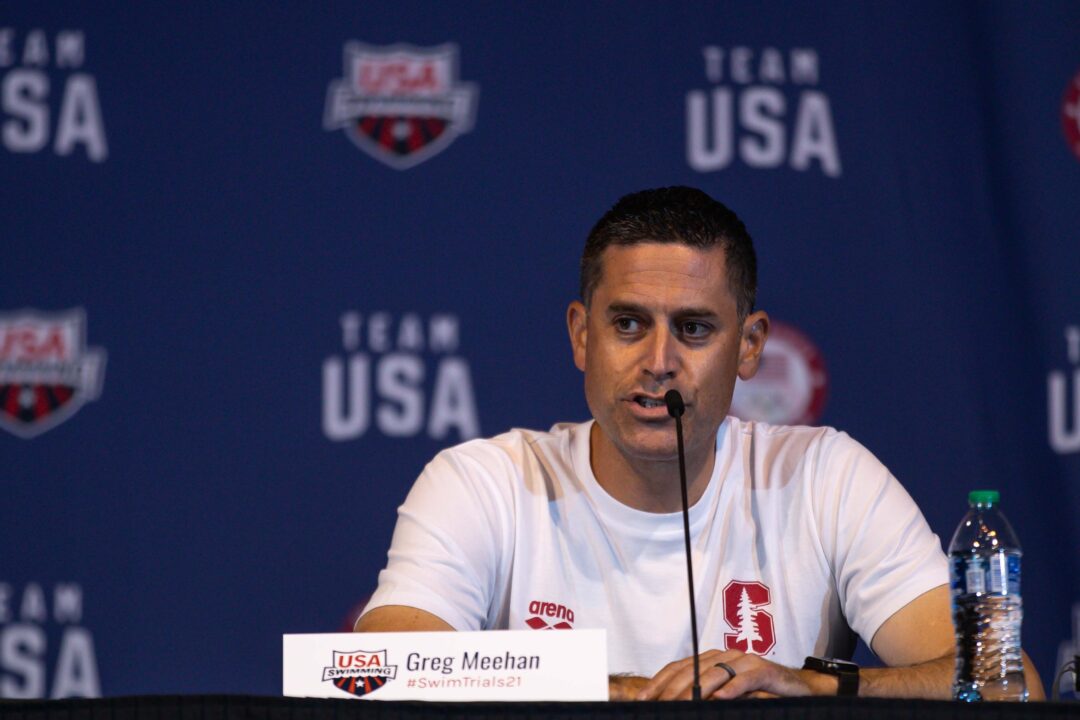 USA Swimming National Team Managing Director, Lindsay Mintenko, and the USA Olympic men’s and women’s coaches, Greg Meehan and Dave Durden, discussed the USA Olympic team in general, along with a few of the specific athletes that Meehan and Durden coach, after the conclusion of the final night of the 2021 US Olympic Trials.

Some of the most indelible images of the last week involved swimmer who had qualified for the team consoling those who hadn’t, even in the moments right after the race ended. Asked about those moments, Meehan said:

I think if you ask National Team alumni their experiences over the years competing for Team USA, it’s not about the times; it’s the experiences. These people love and care about each other. When you get out to that camp setting, spending that quality time together, getting to know the new folks, reengaging with people they haven’t seen in — you know, some of them are really close and they haven’t seen each other in such a long time.

They’re ecstatic just to be able to do that, knowing that’s coming. For Abbey and Simone in the 50, that was a cool moment. Their schools are what, 30 miles apart, but they never see each other because of some of the restrictions through this year. There is that bond. They had their Stanford and Cal rivalry over the years, but as soon as they finished on that 50 they’re on Team USA. Now we’re ready to go compete against the rest of the world.

I think you see that throughout the course of the meet. It’s a genuine love and care for their teammates and the consoling of those that aren’t moving on because they really care about them.

Meehan described what it took for Simone Manuel to make the team after a diagnosis of overtraining syndrome and what the next few weeks look like for her.

We’re going to take it day by day. Much like everything in the last 18 months, you have a plan and then you adjust the plan, then that plan gets adjusted. So we will have — I have a plan already in place, but we will take it day by day and make some adjustments. I think tonight was so representative of Simone’s competitive spirit. She could have not had a coach for the last year and still done what she did tonight because in that moment she is just so tough. Her mental toughness and her competitive spirit is what makes her truly great.

That was amazing to see. She just willed herself to that. We’re just going to take it day by day and make sure we are focusing on her health and at the same time trying to maximize performance.

Durden talked about finally having data points to use in evaluating what the athletes need in the next 5 weeks, after having not had a really big meet in two years.

Mintenko discussed the challenges that pandemic-related health and safety measure would pose for the team in the weeks ahead, but mentioned one point of good news — fully vaccinated team members would not necessarily be prohibited from competition if they were contact traced.

I do think they have modified their rules a bit. They are now taking into consideration vaccination status. They aren’t going to automatically disqualify you if you are contact traced at this point. That was good news for us. I have a lot of concerns going into the next few weeks. The health and safety of our athletes is always our number one priority. It takes on a whole new meaning this year.

We have a strict protocol in place during training camp.  That’s why everybody who has been on this pool deck has been asked to be safe when they are on this pool deck.  This virus is still here. It’s out there, and we’re going into an environment where we have no idea what the other population has been doing to protect themselves. That makes me nervous. We are going to do a lot to protect ourselves. But I’m nervous about what we’re going to walk into.

Greg Meehan DO NOT MESS UP MORE TAPERS

FYI Lindsay Mintenko’s name is spelled wrong in the article.

Wait til Meehan puts Simone in the 4 x100 free relay final and bumps a Bulldog off….

Wouldn’t be surprised. He said he was still considering putting her on the 4×200 based on her training even though she didn’t swim the 200 free…

Yup, this would not be a surprise at all!!

It’ll definitely happen even though Simone has an incredible ability to step up in big individual finals that hasn’t translated to relay events. For someone who’s been 52.0 individually, she’s gone 51.9 2x as her fastest splits, and give 52.3 with a flying start at that same meet.

I’m sure someone like Heemskerk or C1 would trade their relay performances for her individual performances, but it’s a reality to consider when deciding the final foursome.

I would say take that guitar 🎸 that Hall was going to smash, but after dominating the Aussies for years there’s nothing left of it.

A few comments on the choices of coaching staff:
-You will have 3 incredibly young high schoolers from sand pipers who won’t even be able to have their family in Tokyo. Even a young Missy Franklin had her parents at the Olympics for support. Why not bring their coach so they at least have one familiar face? I get that they may not be medal contenders but it’s the RIGHT thing to do for these youngsters in light of the situation of no parents in Japan. Very disappointed.
-What on earth happened to Team Elite? I still revere David Marsh but I’m confused what happened to the post collegiate powerhouse he had built. Seems like no one training… Read more »

You honestly think Ledecky and Manuel are doing the same training??

Not the same sets no but they train together. I think it’s beneficial to have a training partner to push u during sets that swims the same set/distance. Even Ledecky said during press conference she’s excited to get out of to the Stanford bubble and train with “other people”.

Parents are allowed to travel to Tokyo, however, they are not permitted in the venue or Olympic Park.

Team “Not So” Elite?

This comment doesn’t make me optimistic that Kusch will be at his best at the olympics. Hopefully i am wrong.

Bro, you’re literally the second best swimmer in your country, behind Miladinov and you’re about as likely as he is to get a medal at the games. If you hadn’t come to the US to train and use resources provided by tax-paying Americans, you wouldn’t even be in the conversation for an Olympic medal, so I’d simmer down if I were you.

Not laughing with him tho that’s for sure

Do the personal coaches of the swimmers get to attend the training camp in Hawaii or do they have to stay home?

Just those that were chosen to the assistant coaching staff