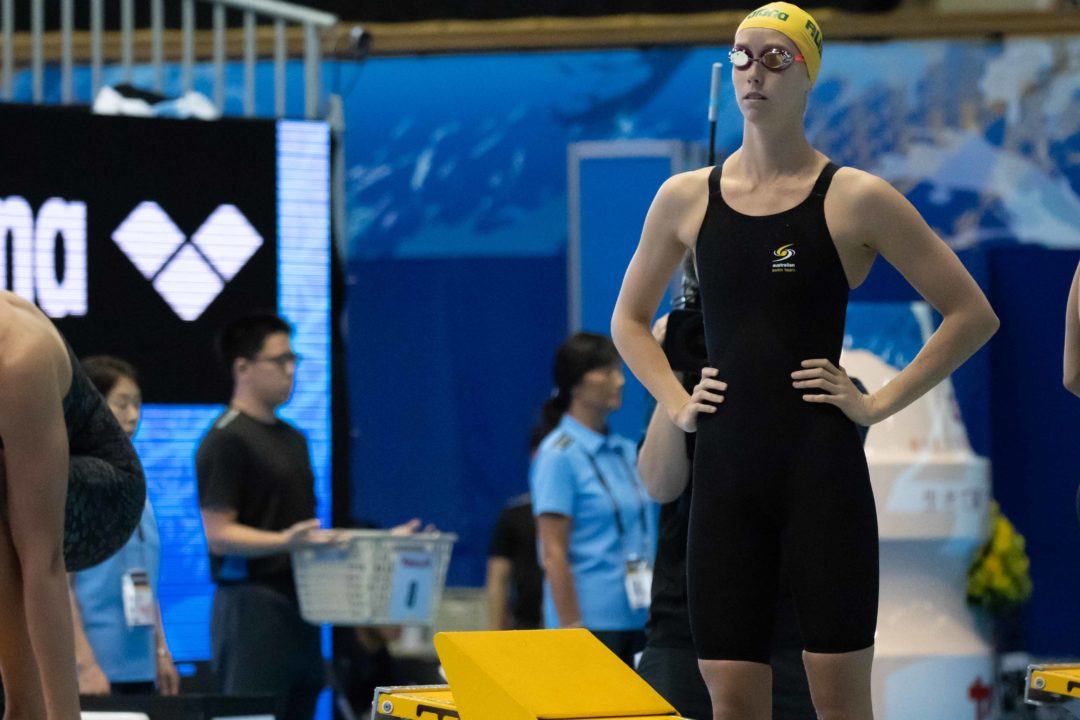 In an unusual turn of events, the heats of the women’s 200 free saw 3 major scratches in Gwangju this morning. Taylor Ruck, the 2nd seed, Emma McKeon, the 3rd seed, and Katie Ledecky, the 4th seed, all sat out the race, blowing a wide open hole in what was anticipated to be one of the tightest fields of the meet.

Due to these scratches, the time it took to make the top 16 (which qualifies to semifinals) was the slowest at a World Champs since 2007. It took 1:59.18 to make it into tonight’s semifinals, up about half a second from 2017. If the 3 scratches had swum, and assuming they were all swimming at least close to what we know they can do, the qualifying time would have been 1:58.21, which is what it took for 13th this morning. Here is the breakdown of what it took to get 16th for all the World Champs dating back to 2007:

Here is the 200 free recap from our prelims live recap, reported by Reid Carlson:

The sudden withdrawals of Katie Ledecky (report here) and Emma McKeon (report here) drastically changed the landscape of the women’s 200 freestyle at this year’s World Championships. Now, unless FINA allows for last-minute subs from either the United States or Australia, heat 7 lane 5 (Ledecky) and heat 5 lane 4 (McKeon) will be vacant, leaving Titmus and Sjostrom, respectively, with clean water to one side.

Another last-minute scratch came from Canadian superstar Taylor Ruck, the 2018 Pan Pacs champion in the 200 free. Without Ruck, McKeon, or Ledecky, three of the best women in the world in this event today, the likeliness of seeing new faces on the podium increases drastically.

Sarah Sjostrom took the race out fast, a full .8 under World Record pace at 50 meters. At 100 meters, Sjostrom was just .18 above World Record pace. Sjostrom maintained her lead through 150 meters, though Siobhan Haughey of Hong Kong kept strong to touch 2nd in the heat. Sjostrom’s time registered at 1:55.14 to Haughey’s 1:56.02. Katinka Hosszu touched 5th in the heat in a sluggish 1:59.44, finishing 17th overall. Though with the scratch rate in this event, she may yet have hope of a semifinal berth.

France’s Charlotte Bonnet took the race out fast, flipping .3 under World Record pace at 50 meters. Though she fell off the World Record pace, Bonnet held the lead through 150, but was then passed by Li Bingjie in the final 25 meters. Bingjie touched in 1:57.59, just ahead of Great Britain’s Freya Andersonwho also charged at the end to touch in 1:57.68. Japan’s Rio Shirai got to the wall 3rd in 1:58.10, in front of the early leader Bonnet, who faded to 4th in 1:58.21, just ahead of USA’s Allison Schmitt, who touched 5th in the heat in 1:58.73.

Penny Oleksiak led through the first 100 meters of the final heat, but was overpowered by Ariarne Titmus at 150 meters. Titmus got to the wall first in 1:56.34, the 3rd-fastest of the morning, holding off World Record holder Federica Pellegrini (1:56.81) and Oleksiak (1:57.25).

Damn missy could’ve made it back lol

And yet Katinka couldnt make the cut at 17th spot… although its not one of her favoured events, its a poor time by Hosszu’s standards. Esp considering she made the final 2 years ago in Budapest.

That US Nats was faster than this last year is insane. That…cannot happen very often, right? (Or ever!?)

This meet is so weird.