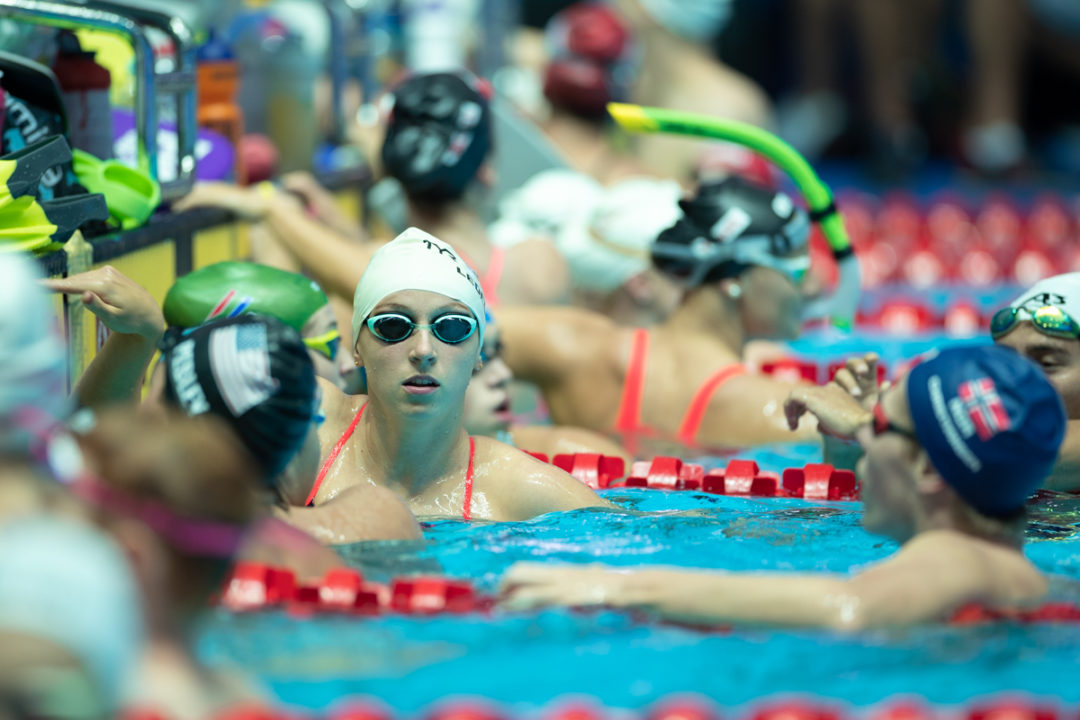 In a huge turn of events, American swimming icon Katie Ledecky will be dropping out of the women’s 200m freestyle at the 2019 World Championships in Gwangju, Korea.

Per Team USA Managing National Team Director Lindsey Mintenko, “A decision has been made by Team USA in consultation with Katie, her coach and the team’s medical staff for her to withdraw from the 200-meter freestyle event on medical grounds. The team will determine her participation in this evening’s 1500m final later in the day.”

The statement continues, “Katie has not been feeling well since arriving to Gwangju on July 17th and these precautionary measures are being taken to ensure her wellbeing and proper recovery and to allow her to focus her energy on an abbreviated schedule.”

Ledecky suffered her first loss  in the 400 free at an international meet on day 1 here in Gwangju, when 18-year-old Ariarne Titmus of Australia surged at the end of the race to beat the American icon. The Olympic champion did not mention being ill during the post-race press conference.

FINA rules do not apparently allow for ‘replacement swimmers’ after the entry deadline, so the USA will not be able to replace Ledecky in the 200 free.

In terms of the 200m, Ledecky isn’t on as solid ground internationally as in her other events, earning silver and bronze at the 2017 World Championships and Pan Pacific Championships, respectively. But, she enters these Championships as the 3rd fastest woman in the world this season in 1:55.32.

After the thrilling 400m free battle, Titmus’ coach Dean Boxall of St. Peters Western stated he thought that Ledecky would ‘come out like a caged tiger’ due to the loss. With Ledecky out of the heats, Titmus has a solid chance of collecting double gold. The Aussie is already ranked #1 in the world with her lifetime best of 1:54.30 notched in April of this year.

The U.S. still has Olympic medalist Allison Schmitt entered in this morning’s 200m free heats, while Ashley Twichell will be in the 1500m free final for USA.

If Ledecky were to scratch the 1500m final for this evening, Spain’s Mireia Belmonte would move into the final, currently sitting 9th as 1st alternate.

More news will be added to this article as soon as we’re made aware.

Katie Ledecky out of 1500 free per NYT

The amount of comments here accusing Katie of being a quitter, after idk…7 years of dominating in the grueling distance events without a single misfire? Give me a break!!!

Cue the people saying she’s faking it and making excuses

Emma Mekeown, seeded ahead of Ledecky withdraws from 200 Free for medical reasons “illness”, Taylor Ruck also withdraws and not a peep from anyone. Some people on this thread suggesting that Ledecky is anything less than she has been for all of these years (among the fiercest competitors men or women) are clueless and have probably never competed at a national or international level before.

Exactly. I never said Ruck withdrew because of illness.She wants to perform well in the 100 Back. That’s my point. Ledecky has both a medical reason and a desire to perform well in another event, and yet all these critics are savaging her . . . .

Actually I edited the post twice. The first time I didn’t even mention Ruck. The second time I realized it could be read the way you read it so yes, I edited it so it would read more clearly. It’s a moot point, though. I’m saying that if Ledecky wasn’t ill and scratched the 200 free, it would be no different than Ruck. If she is ill, it is no different than McKewoen. Either way, nobody is criticizing them, just Ledecky. But I see you now….

When Ledecky’s 200 withdrawal was announced this morning, I’d expected it as I thought she should save herself for the 800/1500/relays. I said nothing about ‘avoiding Titmus’ or ‘sore loser’ as many did. I thought it was a good decision especially since there was no medical diagnosis by the US team and Ledecky had said ‘no no no no’ when asked after the 400 if there was any illness or injury.

I also think it is wise for Ruck and McKeon to manage their programmes – especially if at least one of them is ‘not feeling 100%’ (McKeon) as they had even more events left on their schedules than Ledecky did.

Save your salty ‘i see… Read more »

My original post wasn’t even directed at you. So first you are trying to correct me. Then you are lyao at me and now you are telling me what to do?! I think the “saltiness” is coming from your offended ego or something. And you don’t even use your real name. . . .

I have never competed at any level, but I like to think I am not clueless. I would like to remind people that the 200 and 1500 double is almost impossible with the 200 semis just a few events after the 1500. I had suggested Ledecky not try to swim a really fast time in the 1500 to save herself for the 200 semis. If she is off her game just a bit, it make sense to skip the 200 which is an event that she is less likely to win than the 200; Remember Titmus dropped the 200 at Pan Pacs rather than swim the same 800 and 200 double that Ledecky did. Perhaps FINA would have gotten Ledecky… Read more »

She’s not swimming the 1500 either according to the NYT

Until we get an actual medical diagnosis she is open to the criticism. So what if we never get one? If she doesn’t want to disclose it then don’t take a national team spot and just go swim sectionals.

She clearly looked to have trouble during her 1500 prelims, swimming on guts rather than good form. A shame.