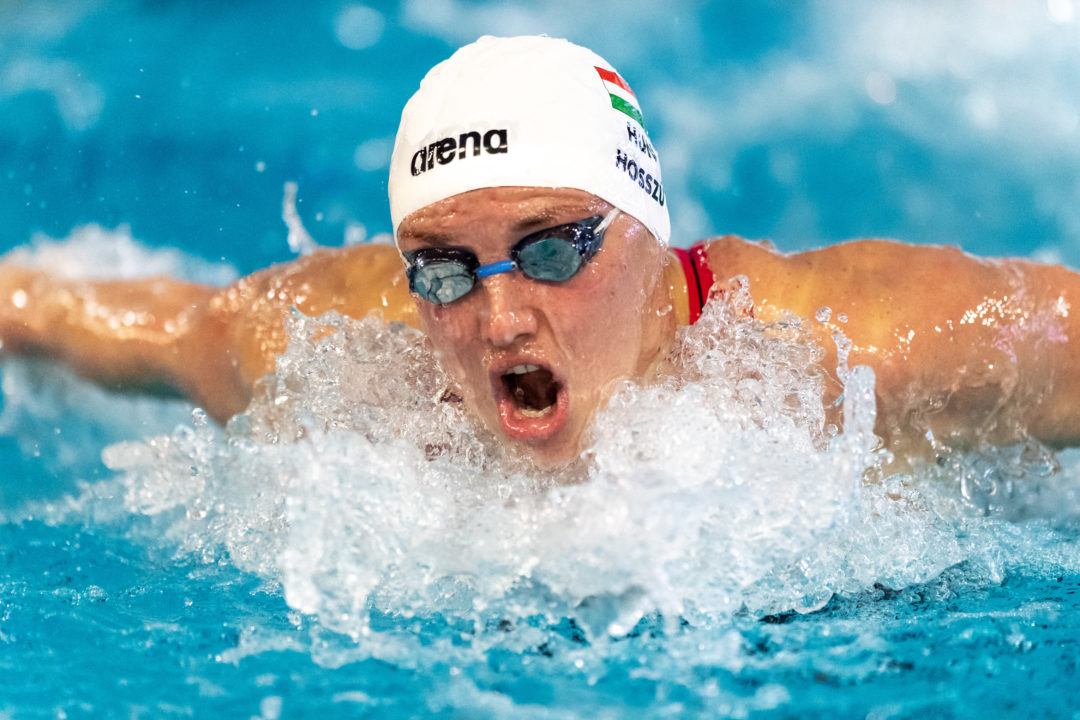 While Katinka Hosszu has dropped her coach Árpád Petrov, she won't be without support at this weekend's European Short Course Championships in Glasgow. Archive photo via Giorgio Scala/Deepbluemedia/Insidefoto

While Hungarian swimmer Katinka Hosszu has said that she will be coaching herself to the Tokyo 2020 Olympic Games after a departure from coach Árpád Petrov announced last week, she won’t be going it fully alone over the next 8 months.

That was evidenced on Monday by Hungarian media reports that her boyfriend Máté Gelencsér has been accredited as a member of the team staff for this weekend’s European Short Course Swimming Championships in Glasgow.

Correction: the original version of this report said that he was accredited as a “coach,” when in fact he’s just been credentialed as a member of the “team staff.”

Gelencsér, while not having any known experience as a coach himself, is the son of András Gelencsér, who is the coach of the Kópé Swimming School in Szentendre, Hungary.

In her statement last week, Hosszu alluded to the fact that, while she would be ‘coaching’ herself, she would rely on ‘colleagues’ to time her and keep a stop watch during her training.

Hosszu said that she made the decision to separate from her coach based on a “feeling” that she couldn’t shake since the World Championships that she didn’t feel that Petrov wanted to win as much as Hosszu did. “In the run-up to the Olympic Games, I can’t take the burden of carrying someone on my back again,” Hosszu remarked.

Hosszu began training with Petrov in the summer of 2018. That move came after a period spent training with USC head coach Dave Salo in the early part of the year when she began competing again after a very public breakup with coach, and now ex-husband, Shane Tusup.

However, in May of 2018, the pair announced they were splitting personally and professionally, necessitating the coaching changes.

Hosszu won 3 individual gold and 1 individual silver medal at the 2016 Olympic Games. This summer, at the World Championships, she won gold in both the 200 IM and 400 IM. She also scratched the 200 back, finished 17th in prelims of the 200 free to miss advancing, and finished 8th in the 100 backstroke.

7 teams are ahead of it

Is this common practice in any other country? Flying boyfriends/girlfriends with the national team and giving them coach’s access to athletes at international events?

yes, especially in Hungary. There is a famous story where there was a bus with 20 seats, all “friends and family” of the club administrators showed up and when they sat down, there were six seats left for the water polo team. They players said that the game is played with 7 players and they need one more seat at least but but the “adults” couldn’t be convinced, the tour had to go on with 6 players. True story…. sadly

When you’re a star they let you do it.

I was thinking that. If you have someone of her calibre, you keep her happy! It is kinda understandable…not sure if it is that helpful though.

Years ago… I want to say it was Beijing, but I may be wrong… the German swimming federation gave official positions to Britta Steffen’s parents, because she was famously a complete head case and needed her mommy around and since she was Germany’s best ticket for an individual gold on the women’s side, they wanted to make her happy. On the flip side some other athletes’ coaches got mad, because they wouldn’t allow them to talk to their athletes face to face for the duration of the meet, even though they were there (at their own costs) so they could watch and lend some encouragement and moral support… It was really unfair and yeah, it probably happens more often than… Read more »

Dang! I was hoping for a Shane/Katinka coaching reunion.