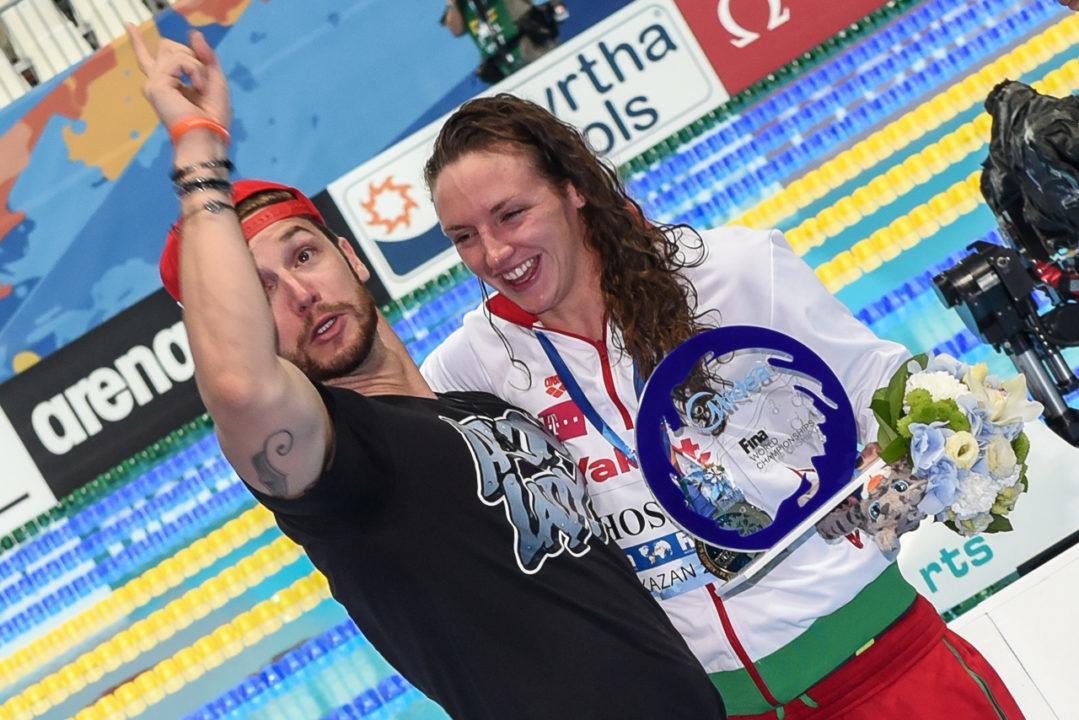 With their relationship facing a difficult time, Katinka Hosszu and Shane Tusup attended an awards ceremony separately this week, although Tusup acknowledged his behavior in his speech. Archive photo via Peter Sukenik/www.petersukenik.com

As a follow-up to the acknowledgement by multi-time world and Olympic champ Katinka Hosszu that she and longtime coach and husband Shane Tusup had hit a ‘difficult time’ in their relationship, the pair attended a Hungarian awards ceremony separately this week. Arriving to the gala at different times, Hosszu attended the sports awards with her father, while Tusup attended with his mother.

Sitting apart in the public eye for the first time since their iron alliance was forged, they each celebrated their respective recognitions, with Hosszu earning Sportswoman of the Year and Tusup winning Coach of the Year. Hosszu was named the country’s Sportswoman of the Year for the 6th time. The recognition came in a year where Budapest hosted the world’s premier aquatic event, the World Championships, and Hosszu won 2 gold, 1 silver, and 1 bronze medal, including wins in her specialties the 200 and 400 IMs. The year did, however, break her streak of 5-straight FINA World Cup Series wins – due mostly to a change in series rules that limited the number of entries an athlete was able to have at each stop. Sweden’s Sarah Sjostrom won the event instead, with Hosszu placing 2nd.

Below is the ‘athlete’s march’ video posted by Nemzeti Sport Online.

Even amidst the pair’s difficulties, Hosszu did recognize Tusup in her acceptance speech (Google translated)

“Thank you very much for the sports journalists that they were elected sixth time. I’m glad they have not been asleep yet. Thank you very much for last year’s Hungarian World Championships at Home: The most beautiful moments of my life happened there. It was the pinnacle of my career, I will never forget it. I would like to thank my family for their constant support. My grandfather taught me to swim. Shane, for always getting the best out of me. Thank you very much again! “

Notably in Tusup’s speech, the 29-year-old reportedly apologized for hurting many with his behavior. He attributed incidents to his being ‘tired, exhausted and having made a lot of mistakes.’ He stated, “I will work to change this year. Thank you, Hungary!” (Nemzeti Sport)

Take it easy on them. These are young people dealing with serious issues.

Yes, because nothing gets me more motivated to buy an “Iron Lady” branded pull buoy than marital strife.

Or a wife’s realization that she’s being abused.

If the way he – Tusup – spoke to his wife at the Charlotte Ultra-Swim back in 2016 is any indication then he’s got a lot of changing to do.

As someone who was actually yelled at by Tusup at an Austin Grand Prix, I hope he changes… for the sake of athletes and others around him

I think he should be forced to tattoo his own slow times on his body instead of wifes. How did Tusup win this award over Milak Kristof’s coach?

Abusive hotheads always say they are going to “work to change” when they want to be forgiven.