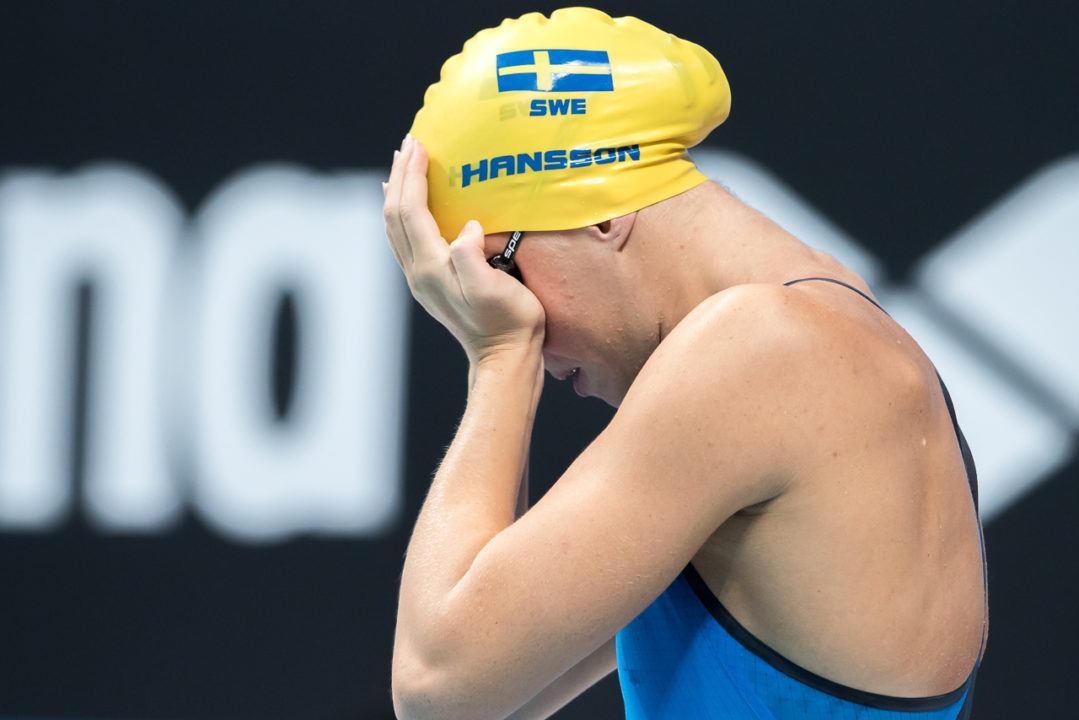 Well-known Swedish butterflier Louise Hansson has been putting her backstroke skills on display this week at the FINA World Cup. Archive photo via Peter Sukenik/www.petersukenik.com

During day 2 prelims of the Berlin FINA World Cup, we got another chance to watch some of the world’s best swimmers battle it out.

In the women’s 100 backstroke, Louise Hansson was second overall in the prelims to Kira Toussaint. Hansson swam a 56.78, while Toussaint lead the pack in a 56.52. That’s a significant best time for Hansson, improving upon the 57.74 she hold from back in 2015. Notably, that swim for Hansson is the exact same as fellow Toronto Titan’s swimmer Lisa Bratton‘s lifetime best and is faster than her 57.05 season-best from Match 7.

While Hansson is usually busy with the butterfly events, she has revealed herself to be a formidable short course backstroker at this meet, having already broken the 50 backstroke Swedish record on day 1 with a 26.07. Hansson could certainly step in as a backstroker for the Titans in the upcoming ISL playoffs, joining either Bratton or teammate Kylie Masse.

Masse was also present in the 100 backstroke heats and delivered a 57.14 to trail her own lifetime best of 55.83 from earlier this season, while 54.89 world record holder Minna Atherton was a 58.09 for fourth.

Kyle Chalmers pulled off a leading time in the men’s 100 freestyle heats with a 47.12 but considering his 45.54 best time and recent swims of 45.65 and 45.69 earlier this month, can be expected to improve upon that in the final. The main question will be whether or not he’ll be able to hold off the field of men chasing him to the wall including Dutch duo Stan Pijnenburg and Jesse Puts who were second and third with their swims of 47.16 and 47.21. Both of those men threw down lifetime bests this year while swimming in the ISL, Pijnenburg a 46.85 and Puts a 46.94.

Along with Pijnenburg and Puts, Chalmers will be met in the final by an elite pack of sprinters including Blake Pieroni, Szebasztian Szabo, Chad le Clos, Luc Kroon, and Matt Temple.

3 of the world’s leading butterfly sprinters set themselves up for yet another battle in the women’s 50 butterfly final as Maggie MacNeil, Louise Hansson, and Emma McKeon went 1-3 in the heats. MacNeil was the quickest with her 25.41 swim which is a new PB by over a second, while Louise Hansson was just 0.04 seconds slower with a 25.41. Following the leading duo, McKeon swam a 25.54 but will likely be faster during finals, having swum a 25.24 just a few weeks ago at ISL Match 8.

South Africa’s Matt Sates and Lithuanian swimmer Danas Rapsys will lead the way in the men’s 200 IM final, having posted the only sub-1:57 swims of 1:55.09 and 1:55.47, respectively. Yakov Toumarkin of Israel was the next fastest but will need to improve upon his swim of 1:57.18 in order to catch the front 2 men. Toumarkin certainly has the potential to do so, considering his own PB and Israeli record in the event of 1:53.17 from just last year.

Another notable swim during day 2 heats came from Madi Wilson who swam the fastest 200 freestyle of the session in a 1:56.39. Unlike her day 1 50 freestyle in which she established a new PB, the Australian sprinter was just a few seconds over her PB in the 200 of 1:52.77 from back in 2020. As we’ve reported, Wilson is less than 2 weeks out from a COVID-19 diagnosis and hospitalization.

Follow along later for our live finals recap which will begin at 12 pm EDT, or 6 pm in Berlin.

MacNeil is remarkable, probably a threat in the 50 & 100 free, fly and back. Potentially the 100 im and lots of relays.

I hope she does at least one ISL season for the Titans.

I suspect Hansson will replace Coleman in the 50k back duties for the Titans, but can’t expect her to do the 100 with her other duties, and especially considering when even Coleman has a faster PB than Bratton but doesn’t do the 100 duties.