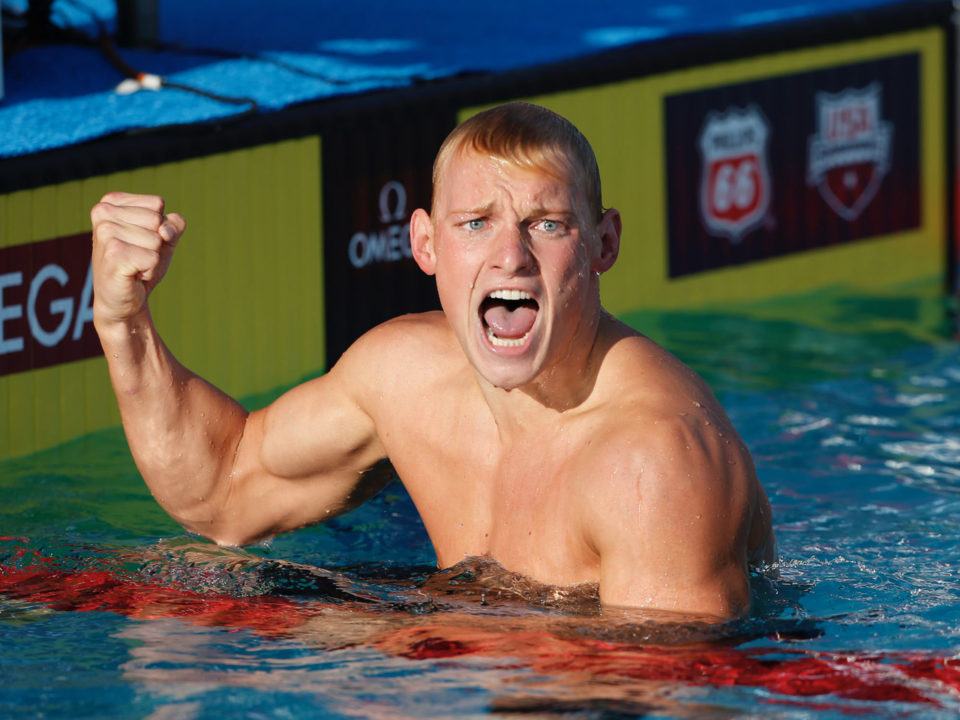 Based on our records, Andrew Seliskar is the fastest junior in American history in a total of four short course meters events. Archive photo via California Aquatics

The United States of America is not known to host many meets in short course meters and tends to restrict its competition to short course yards or long course meters. This is in contrast to most other leading nations in the sport including Australia, China, Russia, Great Britain, and Canada, whose short course meets run almost exclusively in meters.

While USA Swimming extensively tracks and publishes national age group and senior records in SCY and LCM, there is no single source that tells us the fastest swims by 18 & under swimmers in short course meters.

The introduction of the International Swimming League, which runs in short course meters, has brought with it an overhaul of the senior American records as 24 of the 46 SCM American records have been broken at ISL meets over the last three years. While not many American juniors are racing in the league, a contingent of 18 & Unders are currently overseas racing at the 2021 FINA World Cup Series stops in Berlin and Budapest.

Seeing some of the fastest American juniors racing against some of the world’s fastest swimmers inspired us to dive into the databases and compile a list of ‘unofficial 18&U USA Short Course Meters Records.’ The records can be found below and are by no means official USA Swimming records, but are what we believe to be the fastest times swum by an American man and woman aged 18 & under in each event.

We compiled these ‘records’ using the FINA world rankings and USA Swimming rankings. Please let us know if you have reason to believe that any of the records shown are incorrect.

You’ll note that the most recent record on either list is Tess Howley‘s 2:06.09 200 butterfly. Howley swam that time on Oct. 1, 2021, to win gold at the Berlin FINA World Cup meet to take out Mary Mohler‘s (née DeScenza)’s former unofficial USA junior national record of 2:06.17, which she set at the 2002 FINA World Swimming Championships. Not only did Howley swim under Descenza’s former mark, but fellow USA junior Charlotte Hook also swam under the time with her 2:06.15 for second place.

The two were joined on the podium by Katja Fain, who delivered a 2:07.04 Slovenian record.

Perhaps one of the more notable distinctions is Andrew Seliskar‘s quadruple appearance on the record board in four different strokes. Back in 2014, Seliskar raced at Ontario Junior International in Toronto, Canada, and likely unbeknownst to him became the fastest American junior in the 100 freestyle, 200 breaststroke, 200 butterfly, and 200 IM.

Collegiate swimmers got a unique chance in both 2000 and 2004 when the NCAA Championships were conducted in short course meters as part of Olympic preparations. Two of our unofficial records hail from those meets: Anthony Ervin‘s 50 freestyle from 2000 and Kalyn Keller Robinson‘s 1500 freestyle from 2004.

Ervin’s mark of 21.21 was actually a new world record in the event at the time. Heading into the meet, Mark Foster held the record at a 21.31 which Roland Schoeman equaled at 2000 NCAAs, and Ervin lowered with his 21.21. Ervin’s world record stood for a little under a year — Foster took it back with a 21.13 in January 2001.

The other unofficial American junior record which was a world record at the time is Missy Franklin‘s 2:00.03 from back in 2011. Franklin swam that time at a FINA World Cup 10 years ago to become the world’s fastest swimmer in the history of the event. While her WR has been broken by Katinka Hosszu (1:59.23, 2014) and Kaylee McKeown (1:58.94, 2020) since then, Franklin’s time still stands as the official senior American record to this day.

As the American juniors continue to race in Europe, we’ll be sure to keep track of these unofficial records and provide updates should any more be broken. Here are a few swims that came close to doing so already on day 1:

Quintin McCarty just picked up the 50 back record

Is that time from Alexa Merz legit? Couldn’t have been far off the world record in 2004, and would’ve converted into a medal winning time at the Olympics that same year…

NCAA in SCM why not? If ISL proves to be a sustainable league for swimming in the years to come , Switching NCAA in SCM will facilitate athlete’s transition when they go pro.

Is that Alexa merz 50 free correct?! Looks like she didn’t break 23 in yards… and isn’t they only just off the current American record?

Indeed! At the FINA World Cup in Tokyo! (She was just off the podium following Hosszu, Ikee, and Seebohm)

Also Ervin what a king.

But that’s really because Phelps’s long course NAG is insane, not because the SCM one is particularly sluggish.

Didn’t Seliskar swam a 4:03 or something similar at a meet in Canada?

The only 400 IM I’ve found from Seliskar as a junior was at OJI in 2014 where he went 4:13 during prelims and then was disqualified in the final.