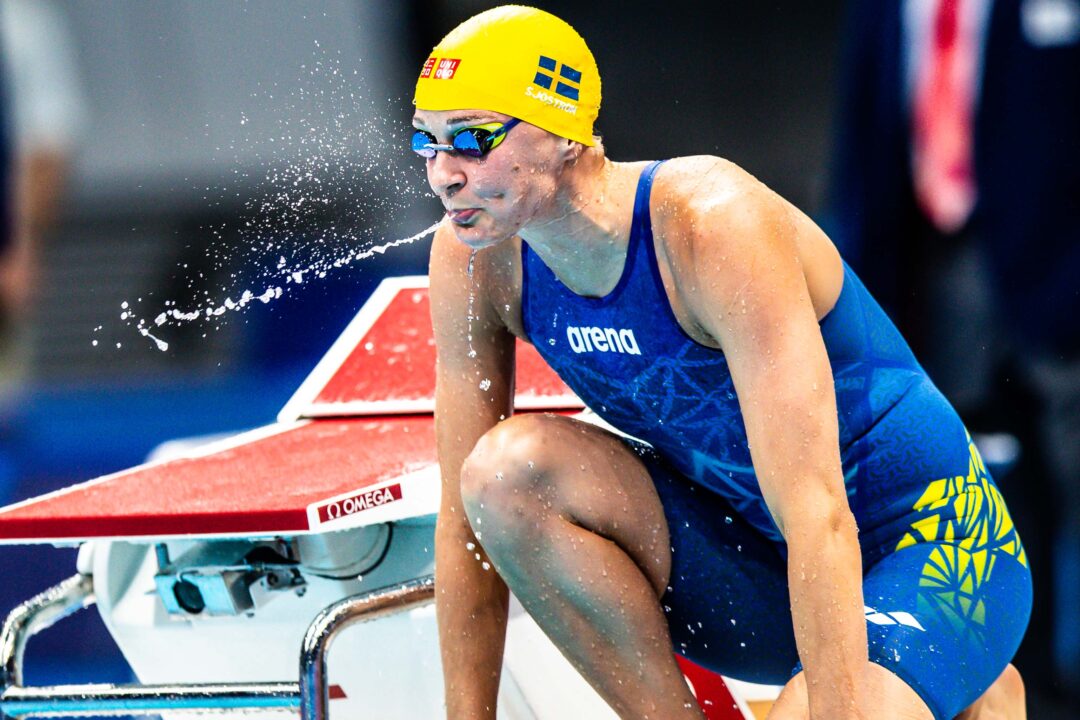 Sarah Sjostrom and Geertrudia Van Roon will be going head-to-head in finals of the women's 50 free at the end of tonight's session. Stock photo via Jack Spitser/Spitser Photography

South African young gun Matt Sates got the job done tonight in his first of two races tonight. Sates opened up a big lead on fly, but Max Litchfield and Hubert Kos both closed on him during the backstroke leg, making things nearly even at the halfway point of the race. Sates would then re-grow his lead on the breast leg, and expand it even further on freestyle, as he tore home for a 4;12.74. The swim stands as a season best for Sates, currently placing him 12th in the world this year.

Though she ended less than 1.5 seconds ahead of the field, Hungary’s Ajna Kesely appeared to be in control of this race from start to finish, slightly out-splitting all other swimmers on each 50 of the swim. She was maintaining 31-mid splits through the first 250m of the race, but then floated up to 32-points for the 6th and 7th laps.

Coming in 2nd was Germany’s Leonie Kullmann, who swam a 4:13.11. She was keeping up with Kesely through the first 200 of the race, flipping just 0.54 seconds behind, but she was unable to keep up with Kesely’s pace on the 3rd 100. New Zealand’s Caitlin Deans took 3rd with a 4:14.34, finishing 4 seconds ahead of the 4th place finisher.

Noe Ponti and Chad le Clos swam virtually stroke for stroke from start to finish, with Ponti grabbing the slimmest of leads on the first 50, splitting 24.01 to le Clos’ 24.05. That margin would essentially stay the same, as Ponti would then lead le Clos into the finish, 51.76 to 51.79. For Ponti, the swim was just off his season best of 51.52, which he swam in March. The swim marks a season best for le Clos, landing him 22nd in the world this year.

Despite France’s Lilou Ressencourt leading at the 100 mark of the race, it would be Hungarian duo Zsuzsanna Jakabos and Dalma Sebestyen who would win the women’s 200 fly decisively. In a repeat of yesterday’s 400 IM final, Jakabos would win Gold, with Sebestyen right behind for a close 2nd.

In a thrilling race, Pieter Coetze ran down France’s Yohann Ndoye-Brouard on the back half, giving South Africa their 3rd medal of the session, and their 2nd Gold. Ndoye-Brouard and Switzerland’s Roman Mityukov took the early lead, flipping at the 100m mark in 58.17 and 58.28 respectively. A poor 3rd 50 from Ndoye-Brouard (31.25) would see him slip from 1st to 2nd behind Mityukov.

Arno Kamminga, to no one’s surprise, won the men’s 100 breast tonight after putting together a phenomenal 2nd 50. Kamminga and American Michael Andrew were in a battle through the first 50, with Kamminga splitting 27.91 to Andrew’s 28.07. As he is want to do, Kamminga just kept his speed going through the 2nd 50, splitting 31.19, while Andrew faded to 31.90.

Although Lydia Jacoby hasn’t yet matched her time from her Gold medal performance in the 100 breast at the Tokyo Olympics last summer, the teenage star keeps improving in the 200 breast. After posting a lifetime best of 2:26.60 at the U.S. International Team Trials last month, Jacoby bettered her time again, swimming a 2:25.98 for Gold here. She split the race well, swimming 33.14 on the first 50, then splitting 37.74, 37.99, and 37.11 on the final 3 50s.

Sophie Hansson gave Jacoby a race, touching just 0.06 seconds behind at the 100m mark, but Jacoby would slightly out-split her on each of the final two 50s.

After winning the 400 IM in decisive fashion, South African star Matt Sates put together a great final 50 to pull away from the field, swimming a 1:46.69. Sates was locked in a tight race with Brazil’s Fernando Scheffer through the first 150m of the race, with Scheffer leading during the middle 100. Sates would then throw down a speedy 26.81 on the final 50, while Scheffer split 27.91 on the final 50, resulting in Sates overtaking the lead and ultimately finishing nearly a second ahead of Scheffer.

Scheffer, the Bronze medalist in the 200 free at the Tokyo 2020 Olympics last summer, picks up Brazil’s first medal of the session with his swim.

Tessa Giele from the Netherlands was fully in control of this final of the women’s 100 free, swimming a 54.57 to touch the wall first by over a second. Giele was explosive off the start, splitting 26.18 on the first 50, then coming home in 28.39.

Czech swimmer Barbora Janickova kept it close on the first 50, splitting 26.45, but was much slower on the back half, coming home in 29.27.

Netherlands went back-to-back in the past two events, with Marrit Steenbergen swimming a 2:12.22. Steenbergen took the lead on the final 50, splitting a speedy 30.84. She also led the field on the breaststroke leg, splitting a 37.64.

In her 2nd final of the session, Dalma Sebestyen took 3rd with a 2:13.18. Despite coming in 2nd in the 200 fly earlier in the session, Sebestyen had the 5th-fastest fly split in the field in this race.

Another Hungarian, Zsuszanna Jakabos, who won the 200 fly earlier in the session, swam a 2:15.36, finishing 5th.

42-year-old Nicholas Santos is still defying age, tearing to a 22.83 to win the 50 fly over Michael Andrew, who was competing in his 3rd race of the night. Santos’ swim was exactly 0.10 seconds off the 22.73 he swam at the Brazil Swimming Trophy, which stands as the #2 time in the world this year. Andrew has been 22.87 already this year.

In her first of two finals tonight, superstar Sarah Sjostrom swam a 25.26 to handily beat out Farida Osman in the 50 fly. For Osman, the swim of 25.87 marks a season best, bringing her to #9 in the world this year. Sjostrom’s time was jsut off the 25.03 she swam at the Stockholm Open in April.

South Africa has had a fantastic day at this meet, as Pieter Coetze picked up his 2nd Gold medal of the session. Coetze clocked a 24.81 in the 50 back, which ties him for 12th in the world this year. In a rematch of the 200 back earlier in the session, France’s Yohann Ndoye-Brouard was right with him, swimming a 24.96.

After winning the 100 back earlier in the session, Canada’s Ingrid Wilm posted a 27.63 to win the 50 back, putting herself 10th in the world this year. Mimosa Jallow took 2nd in a new season best of 27.88.

In the only 3-person 50 final of the day, Brazil’s Joao Gomes swam a 27.10 to win the 50 breast over 100 breast champion Arno Kamminga. Gomes has been 26.62 already this year, a time which he swam at the Brazil Trophy in April.

Lara Van Niekerk continues to be a force in women’s breaststroke, swimming under 30 seconds again in the 50 breast. She handily beat Sophie Hansson, touching 1.03 seconds ahead of her. With the swim, Niekerk also broke the Monaco Mare Nostrum Record in the event. The overall Mare Nostrum Record is a 29.88 from Ruta Meilutyte in 2015.

Bruno Fratus roared to a new season best of 21.49, winning Gold in the 50 free tonight. The swim lands the Tokyo 2020 Bronze medalist at 3rd in the year this year. Additionally, the swim was faster than the 21.57 seconds Fratus swam to win Bronze in tokyo. Thom de Boer also clocked a season best for 2nd tonight.

Sarah Sjostrom bettered the 24.11 she swam in semifinals, getting into the wall for Gold tonight with a 24.08. Impressively, the swim came shortly after Sjostrom won the 50 fly in 25.26. It also marks the #2 performance in the world this year, behind only China’s Liu Xiang. Geertruida Van Roon significantly bettered her semifinals time, dipping under 25 seconds for a 24.90 and a Silver medal.

We are talking actual champs, not the morozov proud league

I’m wrong here I didn’t realize fratus broke 21.4 but he did at the Mare nostrum in 2019. 21.31 to just miss his pb but yeah still a very fast swim though earlier

Sates is the next Michael Phelps guaranteed

Fratus could beat Dressel at worlds…

He would need to be around 21.1 or 21.2, I think those days may be behind him. He’s definitely a medal contender though. 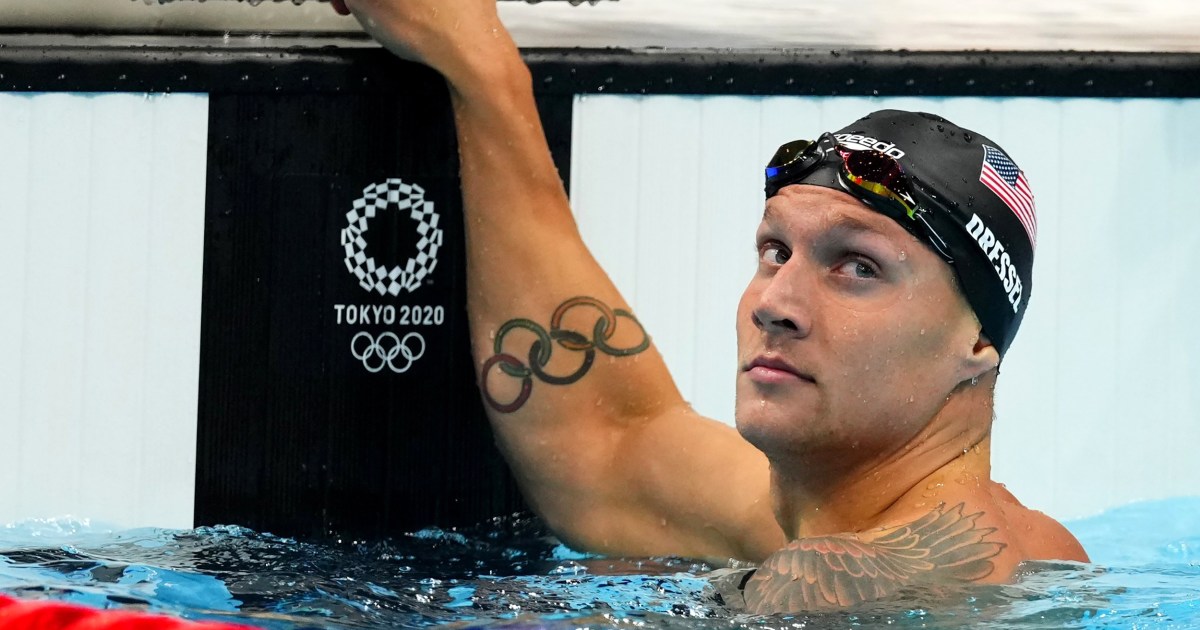 Sarah was impressive. Favourite for WChamps?

Favourite in both 50 events

Fav maybe with McKeon there. Jack will have plenty to say.

Mckeon’s not going to World Champs.

Does this bring fratus’ sub 22 count up 3? was sub 22 3 times here? That would bring him to 94. Seeing that he is in this for, has two more mare nostrum stops, and presumably prelims, semis, and finals, we could see him break 100 this year. Are they doing the same format for the 50s at the other stops?

He’s getting to 100 if not this year definitely next year.

Michael Andrew beaten twice. The hype train is getting old.

Your hate comments are old

Anyone know Sarah Sjostrom’s event schedule for the 2022 FINA World Aquatics Championships? Is Sjostrom opting out of the women’s 100 meter butterfly?

Thas is what she has said.

She said she wouldn’t swim it in Tokyo either and she’s already been 56.70 this season.