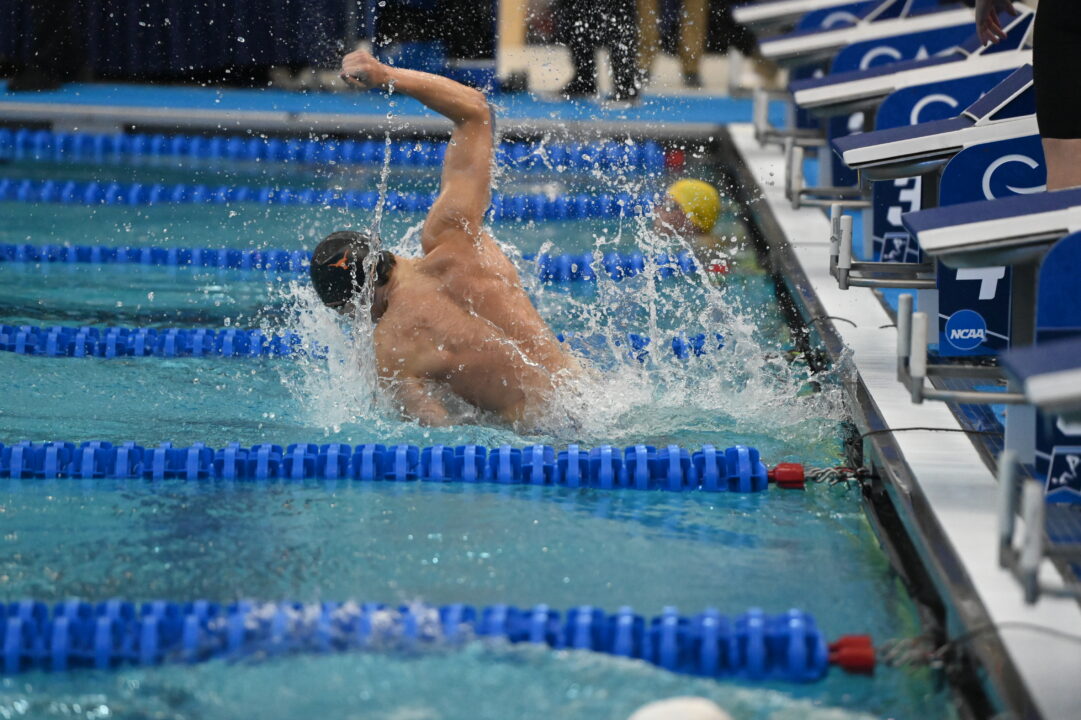 The Texas Longhorns will be swimming for their second-straight title in the 400 medley relay, but on a new night in the schedule. Current photo via

The 400 medley is traditionally one of the most memorable races at NCAAs, and over the last decade we’ve seen some epic races. This year it should be just exciting, but with a couple new twists.

The most obvious change is where the relay now falls in the program. With the 200 medley relay moving to Wednesday night, the 400 medley relay has been shifted from the end of Thursday’s session to the end of Friday’s session. That may not make a huge difference in terms of fatigue — this would be the third event of the night for plenty of swimmers under the old schedule — but it’s worth noting that any swimmer who’s doing the fairly common 100 back/fly double now has this event to cap off the session.

Additionally, it’s worth noting that while there are still no prelims — a change that was made last year due to Covid mitigation measures — teams will compete in all eight lanes, unlike last year, where only every other lane was occupied.

The second difference this year is that there are a few teams towards the top of the rankings who we’re not used to seeing as highly seeded as they are this year, although the usual suspects still dominate the top ten spots on the psych sheet.

NC State was relative quiet in this event in this event last year, but they bounced back in a big way last month, winning ACCs in a meet-record time of 3:01.88 behind a lineup of Kacper Stokowski (44.39), Rafal Kusto (51.55), Nyls Korstanje (44.52), and Sam Hoover (41.42). While that was a great leg from the freshman Hoover, Bartosz Piszczorowicz or Luke Miller could also get the call in to anchor — both finished ahead of Hoover in the individual 100 free.

Just behind NC State on the psych sheet sits their ACC rivals, the Louisville Cardinals, with their time of 3:02.02 from ACCs. Louisville won the 200 medley relay at this meet last year, and they place 4th in this event with a 3:01.52, which is still the ACC existing record. At least three of those four legs return: Mitchell Whyte, Evgenii Somov, and Nick Albiero. Anchor Abdelrahman Elaraby (aka Haridi Sameh) has apparently scratched the meet. However, freshman Murilo Sartori split 41.73 on the 400 free relay at ACCs, and he’s been 42.18 invidually, so the Cards may not skip a beat here.

The defending champions, the Texas Longhorns, are seeded 6th with a 3:02.48 from the Minnesota Invite. They return every leg expect back: breaststroker Caspar Corbeau (50.36), fly leg Alvin Jiang (44.05), and anchor Daniel Krueger (40.80). Corbeau and Krueger have been throwing down similar splits this year, while Jiang hasn’t quite matched what he did last year yet. The Longhorns’ backstroker will probably be fifth year Cameron Auchinachie, who’s been 45.01 this year, but freshman Anthony Grimm has been 45.67 and could be in line to drop more time.

Last year’s third-place finishers, the Florida Gators, return all four men from that relay, which went 3:01.51. They’re seeded 7th with a 3:02.61 from SECs, but that relay lacked breaststroker Dillon Hillis, who split 50.27 last year. Backstroker Adam Chaney has improved from a 45.36 leadoff last year to 44.51 this year, and Eric Friese and Kieran Smith return from the back half of last year’s relay, giving the Gators a very potent quartet.

The Cal Bears are seeded a bit lower than we usually see them — they sit 10th with a 3:02.84, but they are the defending runners-up, and they bring back three of four legs from last year’s 3:00.73 team. Backstroker Destin Lasco went 45.28 on the relay last year before going 44.49 individually the next day. Reece Whitley returns as a breaststroke staple, and sophomore Bjorn Seeliger should hold down the free leg. The question for Cal coming into the season was who would replace Ryan Hoffer and his 43.80 fly leg. Sophomore Dare Rose stepped up at Pac-12s, swimming 45.42 individually and splitting 44.99 on the relay, although it’s possible we could see fifth year Trenton Julian, who had a great summer in the long course 100 fly.

The New Kids on the Block

Ok, so it’s not too shocking to be talking about Ohio State in this event as they’ve had some strong relay showings, especially at Big Tens. But even Buckeye fans have to be pleasantly surprised to see them ranked #2 in the country with only one “really big name” on this relay. That name, of course, is US Olympian Hunter Armstrong, who led off this relay in 44.36 at Big Tens. Hudson McDaniel split 51.35 on breast, freshman Alex Quach rocked a 44.17 fly split, and Semuede Andreis anchored in 41.56. That placed 2nd behind Indiana, but is also the 2nd-fastest time in the country this year. The Buckeyes will be looking for redemption after DQing this relay at NCAAs last year.

We’ll round out our detailed previews with another team that exploded at their conference meet. Fifth year Samuel Tornqvist led off in 45.54, AJ Pouch split 51.45 on breast, Antani Ivanov went 44.31 on fly, and Youssef Ramadan anchored in 41.41, good for 3:02.71 and the #9 time in the country.

When you have teams that make big strides at their conference meet, the question is always whether or not they can repeat those times at NCAAs, but expect to see at least a few of those four teams crack the top eight this week.

Other Teams to Watch

Alabama is the only school with a best time of 3:03 this year, and they could be prime candidates to move up into the top eight as some the schools seeded above them will inevitably lose ground. Georgia typically is able to put together a medley relay that is greater than the sum of its part; the Bulldogs are seeded 13th with a 3:04.76. Michigan, Virginia, and Harvard all feel like they could have more in the tank as well.

Quach has been one of the standout freshman this year, hopefully he can have a good first NCAA’s

Sir, you will be about 1.5-2 seconds behind at least 3 teams after the 2nd leg

In hindsight, this was the only team I put into exactly the right place. Ironic. 🙂

Sartori would need to scratch one event right to swim the medley relay? (Probably the 500)

3
0
Reply
bobthebuilderrocks
Reply to  mens ncaa> every other sport

There are multiple teams that do and likely will fit that criteria.

I feel like the underrated key here is who can best recover from the 100 back. There’s the diving in there to give a better break but that’s still tough. Especially for fly/back double guys like Jiang and Burns and Albiero.

When do teams have to submit their final relay lineups? With the new schedule having the 400 MR after the 100 stroke finals can a coach wait until after he sees who performs better in the final before deciding who gets to swim the relay, or does that need to be set in stone before the session begins?

Eg. Can Eddie Reese wait ‘till after the 100 Back final to choose between Grimm and Auchinachie?

Yes teams can wait until right before the relay even actually begins.

Yes they can. Have to submit final relay before the start of the event in most cases. Most submit them during the diving

There’s not really a set time. It’s basically until the first swimmer is on the blocks.

We learned this because the NCAA used to put out relay lineups before the events swam at NCAAs, and one year (actually the last time it was at Georgia Tech) we got scolded by some SID who doesn’t know anything about swimming for reporting it, because one of the coaches complained.

So, as per usual, coaches shut down the fanside of the sport. Your loss, nobody really gains.

learned this at my conference meet last month. One of our fast swimmers had mono during the meet unbeknownst to all of us at the time. Swam through the final day but before the 400 free relay, he felt sick and didn’t feel good enough to swim the relay. Coaches had to redo the lineup for our 400 free relay and replace him.

Historically, the NCAA championships ended the meet with the 300 medley not the 400 free relay.
Times change and events move for many reasons.

Tell me more about this 300 medley.

I liked the old schedule. Gave a sneak peak into what might happen on Day 3. Gave people a chance to swim 100 stroke on more than one night, in case they have a bad night. Gave the stroke-based swimmers something to do on Day 2 -especially those 100fly-100back doublers.

While having an in-state prejudice toward UT, you gotta admit two things:

We are all assuming Jiang is good for his 44.5 split, he does have a tough double that day so this is his 5th 100 of the day

I’ve also Auchenachie down for a 44.6 leading off

I’m feelin’ it. And more importantly, so are the ‘Horns…

Hope Cam can handle the weight of wearing horns at his only NCAA’s with them. A lot riding on him, in particular, to have a lights out performance. I’m excited to watch his swims.