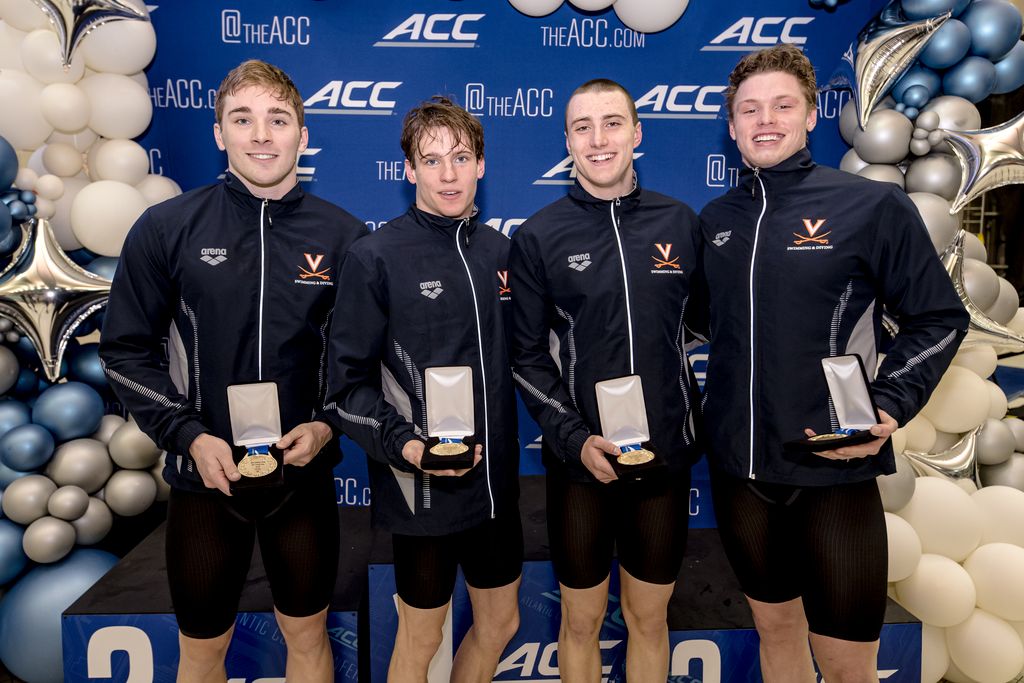 The Virginia men won an ACC title and broke the American record in the 200 free relay last month. Will they win this event at NCAAs? Archive photo via Matt Riley of UVA Communications

Being a relay loaded with young talent, the Cavaliers are nearly two seconds faster than their NCAAs time of 1:16.01 from last year. Brownstead and Lamb return, but Will Cole and Justin Grender were replaced with Alabama transfer Matt King and freshman Connor Boyle, who both contributed to the newfound speed of this Virginia team.

In addition, the team also has freshman Jack Aikins, who was not on their relay at ACCs but has a best time of 19.12 and was sixth in the individual race at conference. The fact that a 19.1 sprinter wasn’t used on their relay shows how deep Virginia’s sprint group has gotten in recent years.

Although the Virginia men don’t have that much experience being title contenders, we could potentially see them firing on all cylinders on this relay considering how well the Virginia women did at NCAAs last week.

But keep in mind, despite the Cavaliers being the American Record holders, they actually only had the sixth-fastest performers of all time, because all of the relays faster than them had at least one swimmer who wasn’t American.

However, the biggest hole for Cal is that they are missing Ryan Hoffer. Hoffer split a blistering 18.06 on their NCAA relay, and was one of the biggest reasons why they were able to go so fast. Their slowest leg, Nate Biondi, who anchored in a 19.07, will also be gone. Biondi and Hoffer got replaced with freshman Jack Alexy and junior Marcos Rico Peng, who split 18.57 and 18.90 at Pac-12s respectively. However, Peng is not qualified for NCAAs as Cal reached their roster maximum for the meet and do not have room for relay extras, so they will need to find someone for their fourth leg. The next fastest person on their 50 free depth chart is Robin Hanson, who has a best flat start time of 19.59.

Cal got better progressively throughout conferences, so there is no reason as to why they wouldn’t be much faster at NCAAs.

NC State finished just a tenth off Virginia at ACCs, and sit as the second seed with a time of 1:14.59, which is also the tenth-fastest performance of all time.

Like their ACC rival, the Wolfpack are also significantly faster than their NCAAs time of 1:16.24 last year.

NC made an upgrade with David Curtiss, the 2022 individual ACC Champion who split 18.79 leading off their 200 free relay and has been as fast as 18.02 on a relay start. Adding Nyls Kornstaje, one of the top butterfliers in the nation, also seems to be a good move as his 18.54 split gave the team a huge boost.

Overall, the battle between the top three seeded teams seems to be very tight. However, there are still two more schools this year that have relays in which all of their swimmers were under 19: Ohio State and Florida.

Florida is seeded fourth with a time of 1:15.18, but was 1:14.18 to place second last year to Cal. The Gators return Kieran Smith, Adam Chaney, and Eric Friese on their relay, but swapped Will Davis with freshman Maguire McDuff at SECs this year. McDuff (18.69) was just a little slower at conferences compared to Davis (18.59) at NCAAs. But his drop from 20.15 to 19.15 this season on his flat start, as well as his improvement in the 100 free, indicate that he has a lot of untapped potential in him to drop even more time.

Ohio State comes in as the fifth seed with a 1:15.28, a massive improvement from their 1:17.42 from 2021 NCAAs. Hunter Armstrong, who is primarily a backstroker, had a huge sprint freestyle breakout at Big Ten and took titles in the 50 and 100 free. He led off their relay at conferences in 18.98, and set a personal best of 18.93 in that same meet. Sem Andreis improved from 18.95 last year to 18.61 this year, and Collin McDermott and Justin Fleagle’s 19.91 and 19.52 splits were swapped out with sub-19 splits from Alex Quach and Ruslan Gaziev.

The Buckeyes were nearly a second faster at Big Tens last year than they were at NCAAs, so there is certainly a possibility that they will add this as well even with all of the upgrades that they got.

On paper, Texas’s squad with names like Daniel Krueger, Cameron Auchinachie, Drew Kibler, and Caspar Corbeau look promising. Krueger was the only man not under 19 at Big 12s, leading off in a 19.20. He’s been as fast as 19.04 before and has been 40-point in the 100 free during relays, indicating that he has room in him to crack that 19-second barrier.

Auchinachie, a Denver transfer, is seeded fifth in the individual 50 free with a time of 18.80 and is one of the biggest additions to Texas’s sprint group. In addition, Drew Kibler’s presence on the relay, as well as his decision to swim the 500 to the 50 indicates that he is shifting to focus more on the sprints. Corbeau was 18.75 as an anchor, a split that is very impressive for someone who is primarily a breaststroker.

The Longhorns are seeded seventh with a time of 1:15.49, slightly faster than their sixth-place finish 1:15.82 time from last year.

Rounding out the top 8 is Indiana, which comes in seeded as the eighth seed with a 1:15.81. Like Ohio State, they also added from Big Tens to NCAAs last year, but come in four-tenths faster than their season best of 1:16.24 from 2021. Jack Franzman (18.99), Rafael Miroslaw (18.83), and Van Mathias (18.59) all had strong splits on their conferences relay, but leadoff Bruno Blaskovic needs to drop a bit from his 19.4 in order for the Hoosiers to move up the rankings.

Tennessee, the 12th seed at 1:16.48, was second at SECs and have Jordan Crooks, the top seed in the individual 50 free with a time of 18.53. However, based on how their women performed, the Vols may have gone all out at SECs and won’t have enough in the tank to go fast at NCAAs.

Another two seemingly underwhelming SEC teams are Alabama and Georgia. The Tide are all the way down in 22nd on the psych sheets with a time of 1:17.19, despite the fact that they were third at NCAAs last year. That being said, Jonathan Berneburg is also their only member on the team from that relay, which could explain why they are so much slower. Georgia was just behind Alabama at NCAAs in fourth, but is seeded sixteenth with a 1:16.71. However, the Bulldogs did lose one of their top sprinters, Camden Murphy, following the conclusion of last year.

Note: SB add-up includes the four fastest flat-start times from the team’s swimmers this season. This may not be indicative of a team’s ability in instances where a swimmer who is used on the relay doesn’t swim the 50 free at a taper meet.

Dark Horse: Harvard- At the 2019 NCAAs, Harvard swam 1:16.43 in prelims to qualify for the ‘A’ final, but then added 1.5 seconds to get eighth in 1:18.06. The Crimson return three members of that relay (Dean Farris, Umit Gures, Raphael Marcoux), and have added Mahlon Reiman, who is already faster than their fourth leg in 2019, Grant Goddard. They are currently seeded 15th with a time of 1:16.61, but could be faster since none of them seemed rested for Ivies. In addition, timed finals at this year’s NCAAs could be beneficial for the team considering their sizeable add from morning to night last time out.

Yeah, but how many Gusburgers can they eat in 6 minutes???

Feeling NC State here. I think Stokowski has room to drop on that anchor leg.

According to SS this is going to be 100 point rout for CAL. They only picked Texas to have 12 finalists to Cal’s 18.

Wow… I mean obviously these are mostly flying-start splits but am I the only one who feels like it was just yesterday when Bousquet first broke 19????

Really playing it safe, saying Bjorn is a top 50 freestyler in the country. In the NCAA he’s top 10, and a good argument for top 5…

I don’t think we’ve seen the “awesomeness” of UT, but that is shortly to be displayed – I think top 3, for sure.

Everyone forgetting Feigen gonna be on this relay when the time comes.

Unless they put Cadwallader, 20.84 No Fins on the relay, UVA doesn’t stand a chance.

So I see we are starting this trend now…..