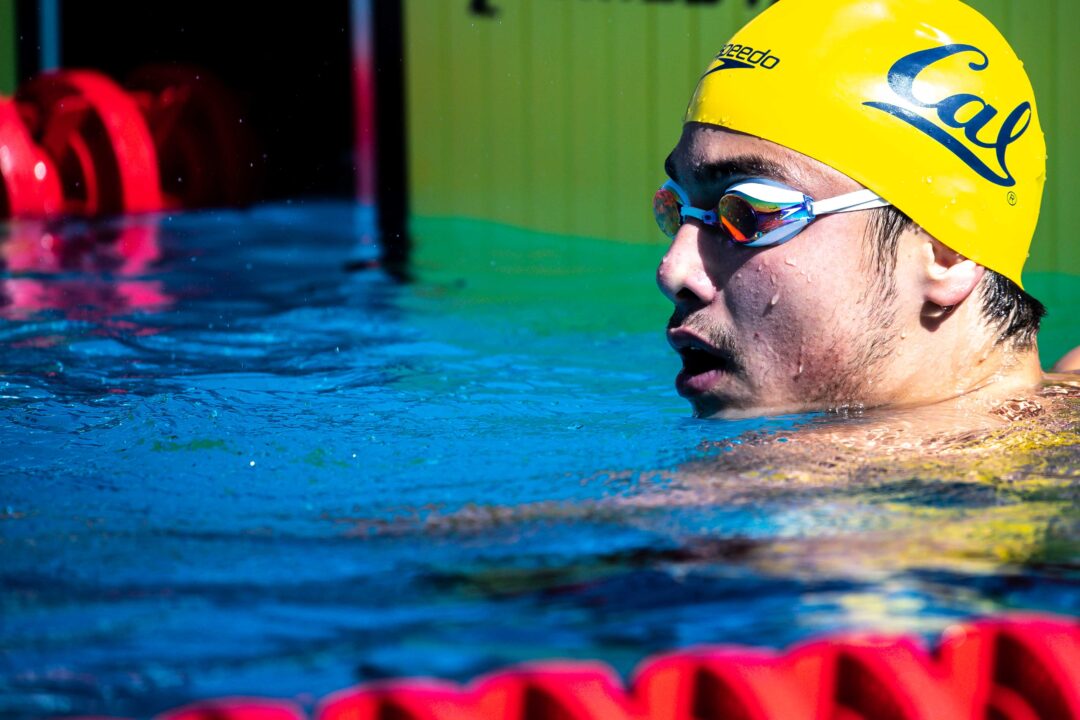 This is one of the few races this week that has a crystal clear favorite. Stock photo via Jack Spitser/Spitser Photography

Shaine Casas, who decided to forgo his final year of NCAA eligibility to turn pro, won the 200 back at last year’s NCAA Championships in 1:35.75, 0.02 seconds off of Ryan Murphy‘s NCAA and American records. Here are the 2021 ‘A’ final results:

This is one of the few races this week that has a crystal clear favorite. As just a freshman last year, Destin Lasco took 2nd in the event with a 1:35.99, becoming the #3 performer all-time. With Shaine Casas out of the picture, nobody else in the field has been under 1:37.8 before.

The question surrounding Lasco isn’t so much whether he’ll win, but whether he’ll take down Cal alum Ryan Murphy‘s NCAA and American Records. Lasco would need to drop just 0.27 seconds from his personal best to crack Murphy’s mark.

This season, Lasco has been as fast as 1:38.81, making him the #1 seed. That may look questionable, since it’s nearly 3 seconds off his best time, but there’s also no reason to think Lasco needed to take much rest for Pac-12s. He was also fantastic at this meet last year, coming in with a season-best of 1:38.13, then swimming a 1:37.19 in prelims before clocking his 1:35.99 in finals.

Mefford, Carr, and Foster: The Returning ‘A’ Finalists

Outside of Lasco, there are 3 more returning ‘A’ finalists from last year. Bryce Mefford, a Cal 5th year, finished 3rd last year with a career best of 1:38.31. There’s some uncertainty surrounding Mefford in terms of his preparedness for this meet. He took a break from swimming this fall, and didn’t compete for Cal at all in the first semester. We don’t know exactly how long he stayed out of the water, or exactly when he got back into full training. Now, he wasn’t looking super sharp at Pac-12s, until the final of the 200 back, where he managed a 1:39.49. Given that, there’s no reason to think he won’t match his Pac-12 performance this week, regardless of whether he gets back down to 1:38-low.

Another Cal 5th year, Daniel Carr, took 4th last year with a 1:38.86 after posting a 1:38.63 in prelims. The swims were a bit off Carr’s personal best of 1:37.87, which he swam at the 2020 Pac-12 Championships, just before the COVID-19 pandemic shut down the NCAA season. His personal best makes Carr the 2nd fastest swimmer in the field based off best times, and makes him the #10 performer all-time in the event.

The only other returning ‘A’ finalist from 2021 is Texas’ Carson Foster, who took 6th last year with a 1:39.23. Foster dropped huge from his seed in the event last year, entering the 2021 NCAAs with a 1:40.34, then posting a 1:38.41 in prelims. Unfortunately, as Foster is predisposed to do at times, he added time in finals and fell to 6th place. Nonetheless, his 1:38.41 personal best makes him 4th in this field, and having made the ‘A’ final last year boosts his status in the event as well.

It might seem funny to have an Olympic medalist in a section labeled “emerging stars,” but we haven’t seen Florida senior Kieran Smith compete in backstroke very often in recent years. We know he’s going to bring it in the 200 free and 500 free, but we don’t have much data on Smith racing the 200 back. What we do know is that Smith and the Florida coaching staff decided to pursue the 200 back over the 100 free at this meet, and the only reason they would do that is if they felt he could finish higher than in the 100 free. Smith swam his personal best of 1:39.51 at SECs, and given that he wasn’t as sharp as he usually is at SECs this year, it would seem he’s poised for another lifetime best on Saturday.

With half the ‘A’ final from last year no longer in the NCAA, it looks like Stanford junior Leon MacAlister is one of the swimmers next up for All-American status. MacAlister, like the rest of the Stanford roster, swam very well at Pac-12s a few weeks ago, posting his lifetime best of 1:39.18. A repeat performance in prelims, and MacAlister will have no problem getting into the top 8.

Virginia Tech 5th year Sam Tornqvist also swam a personal best at conference, swimming a 1:39.20 at the ACC Champs last month. Tornqvist finished 12th at NCAAs last year, swimming a 1:40.54. Like MacAlister, if Tornqvist is near his entry time in prelims, he’ll more than likely be in the ‘A’ final.

Wisconsin sophomore Jake Newmark is yet another swimmer who posted a personal best at conference. At Big Tens, Newmark took 2nd with a 1:39.50, a massive performance. The time marked a personal best by 3 seconds. While he may not be quite as fast in Atlanta, Wisconsin has done a great job in developing backstrokers over the last few seasons.

UVA freshman Jack Aikins is another emerging backstroke star. The freshman swam a 1:39.53 at ACCs, marking a personal best. While it can be hard to project freshmen for NCAAs, Aikins is on a great upward trajectory and could swim another best time of Saturday.

Indiana 5th year Gabriel Fantoni is the #12 seed with his season-best of 1:40.06. Fantoni was a B finalist in the event last year, ultimately taking 16th in finals. Fantoni does need to be watched, however, as his personal best of 1:39.53 would put him in top-8 contention.

Louisville senior Mitchell Whyte was the B final winner last year, swimming a 1:40.00. While Whyte has only been 1:42.52 this season, he has the experience to make the ‘A’ final this year.

Another interesting guy to keep an eye on is NC State’s Kacper Stokowski, who enters as the 14th seed with his season-best of 1:40.20, also his personal best. Stokowski is a sprinter, who is one of the fastest 50 backstrokers in the NCAA currently. Despite that, he’s managed to get his 200 down to 1:40-low.

I think it’s Lasco’s race to lose, but it won’t be as much of a landslide as people think. I see him being 1:36 but not quite close to Murphy’s record without Casas in the pool.

No times in the USA database this year

He retired way back right after Olympic trials

Jake and Carson Foster are going to light up the pool!
This race remains open to any of the top 6

Lasco in a class by himself, Texas wants Carson to get in ahead of the other Cal guys. Tough race

I agree with the order, but not the times.

It’s sure to be a fun race for second and third!