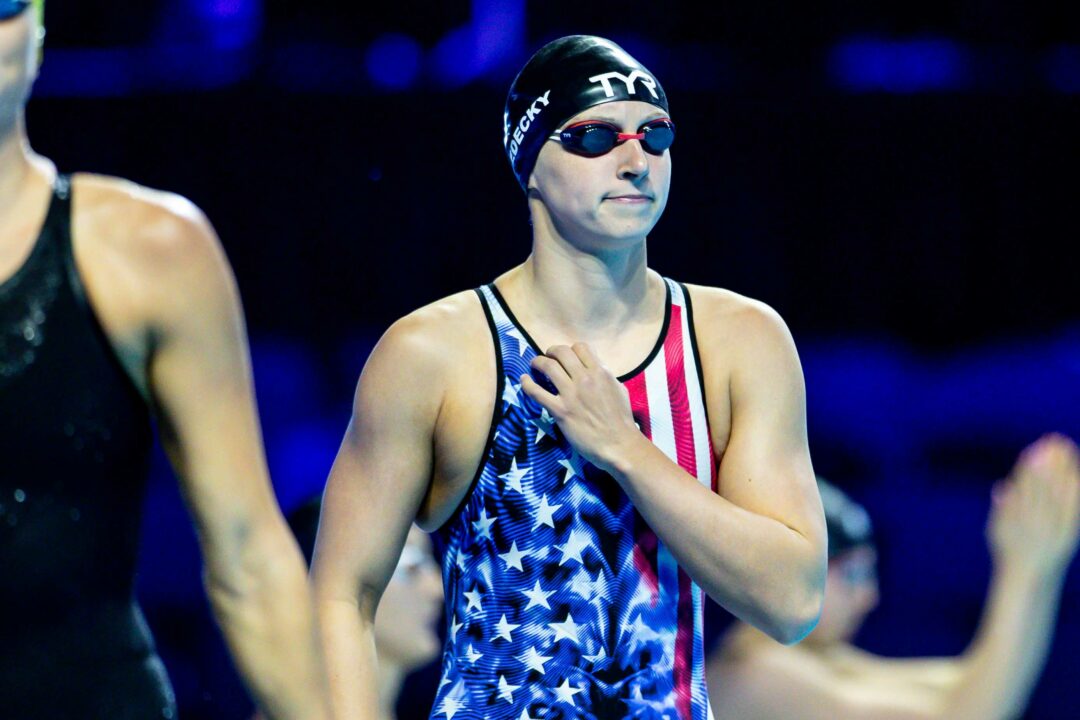 It’s showtime for 1500 free World Record holder Katie Ledecky who has a 200 free and 1500 free double tonight, and both are finals races. She leads both events, but UVA star Paige Madden was not far behind her in the 200 free semifinals. The event will also feature Cal alumnus Katie McLaughlin, ranked 3rd after the semifinal, and two-time Olympian Allison Schmitt, ranked 4th.

In the 1500 free prelims, Erica Sullivan of Sandpipers of Nevada was Ledecky’s closest challenger. She finished with a time of 15:56.24, right on her lifetime best in prelims and about 13 seconds off of Ledecky. 2018 U.S. Nationals champion Ashley Twichell, who has already made the Olympic team in open water, is 3rd going into the final.

Another race to watch will be the men’s 100 free semifinals. Three-time Olympian Nathan Adrian had a solid prelims swim that earned him 6th going into the semifinal. Top seed and 2016 Olympic relay medalist Caeleb Dressel placed 5th overall this morning. They may save the big speed for the final tomorrow night, but we can look forward to faster swims from them both tonight. Adrian won gold in this event at the 2012 Olympics and bronze in 2016.

Rio Olympians Ryan Held and Blake Pieroni had the fastest prelims times (48.07 and 48.14, respectively), but the top six are separated by just .30. And it will be a battle to both get into the final.

Then, it is 200 fly night for both men and women. It’s the finals race for the men, lead by Georgia’s Luca Urlando from DART Swimming and 2018 Pan Pacific Championships bronze medalist Zach Harting. They both posted 1:55.21’s in the semifinals.

Cal’s Trenton Julian and 2016 Olympic relay medalist Gunnar Bentz were right there with them, making for an intense race tonight. It will be interesting to see if there’s a change in race strategy here, after Urlando blasted a 54.74 first 100 meters in the semifinals compare to Harting’s more reserved 55.79.

On the women’s side, 2016 Rio Olympian Hali Flickinger looks to officially secure her ticket to Tokyo. She finished second place in the 400 IM final after an incredible finish, but USA Swimming is waiting to see if the women’s team reaches the roster limit of 26 people before officially announcing that the second place finishers have made the Olympic team.

Flickinger placed 1st in the 200 fly prelims race by .82 and she made it look easy. Michigan’s Olivia Carter was right there with her at the 150-meter mark until Flickinger really picked it up the last 20 meters to extend her lead. There’s no guarantee Flickinger will go for a fast time tonight in the semifinals, but she showed this morning she is capable of some serious speed. Her lifetime best is 2:05.87 from 2018.

Georgia’s Dakota Luther, Texas’ Kelly Pash and future Stanford swimmer Regan Smith from Riptide are her closest competition, based on prelims results. 4th seed Smith could go off as well, following her victory in the 100 back final last night. Her lifetime best 200 fly time is 2:06.39 from March 2020.

The men’s 200 breast semifinals are set up to be extremely close. 1st through 4th place in prelims were separated by less than .30. 18-year-old Matt Fallon from Greater Somerset County YMCA leads the field, followed by Nic Fink, Kevin Cordes and Daniel Roy. Cordes is the second all-time fastest performer in the 200 breast in the country.

There were no finals scratches tonight except for Rio silver medalist Josh Prenot who withdrew his first alternate spot in the 200 breast, which you can read more about here.

The women’s 200 IM final will be another make-or-break moment, this time for 2016 Olympian Melanie Margalis. Her seed time of 2:08.84 would have won the semifinal so she is within striking distance of making the team. She finished 5th in the semifinals race with a 2:11.25.

Virginia’s Alex Walsh and Kate Douglass are ranked 1-2 going into tonight’s final, and Walsh was the only swimmer to crack 2:09.00 in the semifinal. They will have to race the likes of Margalis and Texas alumnus Madisyn Cox, though, to vie for those Olympic Team spots.

Do you realize that Matt Fallon and Nick Fink, 1 and 2 in the semifinals of the 200 meter breaststroke, are both graduates of the Pingry School in Basking Ridge NJ.

Taylor ruck just changed her nationality she gonna swim 1:52.5 in the final tonight

I’m still perplexed why KL is swimming the 200m free. The US should just hold one spot open for her in the relay.

hoping for multiple guys to be solidly sub 48 tonight. Tomorrow would love to see some 47 lows to mid in addition to a Dressel performance to match the USSR for the relay.

No it’s not, there were 15 republics in the old USSR, now there are 15 countries & Russia is one of them & so is the US favourite country Kazakstan, so it’s a little more then just potato potahto.
This was done more then 30 years ago. Amazing!!!!

200 fly prediction: Gunnar Bentz down for the start and flinches, getting dq’ed. With a new strategy of taking it out fast, Zach Harting on the last 50 but hangs on for 2nd as Brooks Fail to make the team and we Luca the scoreboard to see Urlando in 1st

I would love it if Cody came 8th