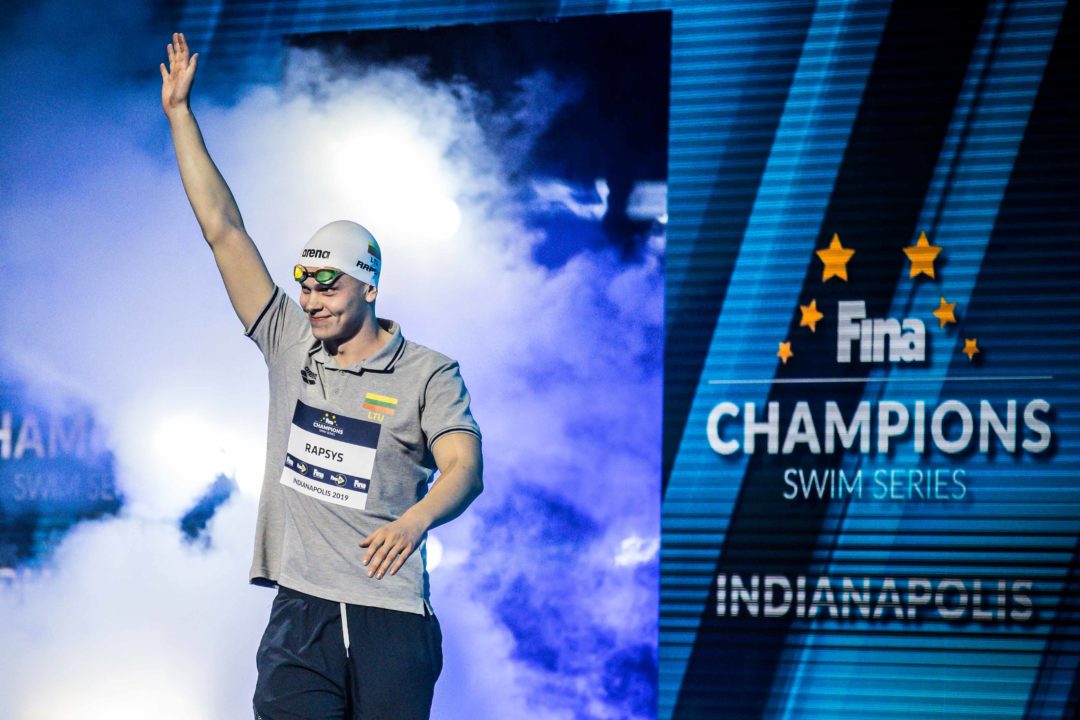 The 2020 FINA Champions Series is here, and there's tons of races to watch as we enter the Olympic year. Check out the top 5 races to watch in Shenzhen. Archive photo via Jack Spitser/Spitser Photography

The first stop of the 2020 FINA Champions Series is schedule to start up tomorrow, January 14th, in Shenzhen, CHN. Much like last year’s series, this year’s edition will feature past medalists from past World championships, Olympics, top World Cup contenders, world record holders, and top-ranked swimmers.

As we now enter the Olympic year, these upcoming races in Shenzhen will give just a taste of the high-stakes racing that could go down in Tokyo. So without further ado, here are the top 5 races to keep an eye on over the next 2 days of racing.

With American Caeleb Dressel not present, Russian Oleg Kostin and Brazilian Nicholas Santos come up as the remaining top 3 from 2019 Worlds. While Santos has yet to swim the event long course this season, Kostin currently has the fastest time in the world at 22.84.

Behind the duo will be American Michael Andrew, who has the world No. 2 time of 22.94, and current world record holder Ukraine’s Andrii Govorov.

It is a superstar clash in the men’s 50 breast, featuring Belarus’ Ilya Shymanovich, Brazil’s Joao Gomes, and

At the 2019 Worlds final, Gomes was the lone medalist (bronze) while Shymanovich managed a 5th place finish. Despite being the 3rd seed after semifinals, Scozzoli ended up being disqualified during the final.

So far this season, only Gomes has raced this event long course with his world World Military Games time of 27.07. Meanwhile, the other swimmer in this event, Dutchman Arno Kamminga, currently sits on top of the world rankings with 27.00.

Another quartet of superstars, this women’s 100 free will showcase the other top sprint freestyle contenders behind Swede Sarah Sjostrom, Aussie Cate Campbell, and American Simone Manuel (who are all absent in Shenzhen). Finishing 3rd place in the 2019 World Cup Series, Swede Michelle Coleman appears to be on track after her 16th-place finish at the 2019 Worlds meet. This season, she sits second in the world rankings at 53.04 from November.

However, right on her tail is 2012 Olympic champion Ranomi Kromowidjojo of the Netherlands, who is 4th in the world (53.33). Femke Heemskerk (Energy Standard) of the Netherlands and Hong Kong’s Siobhan Haughey (DC Trident) had very successful ISL seasons in this event, albeit in short course, and will try to carry that forward into long course racing.

At Worlds, Heemskerk was the lone finalist, finishing in 6th place. Meanwhile, both Kromowidjojo (9th) and Haughey (10th) just missed the final.

The top 3 finalists from the 2019 Worlds final all return in the same pool, with 4-time champion Katinka Hosszu of Hungary leading the charge. Runner-up Ye Shiwen of China, also the 2012 Olympic champion, and bronze medalist Sydney Pickrem of Canada will also be tight on the Iron Lady’s tail.

This year, Hosszu has the fastest time of the group with a 2:09.50 from the Kazan World Cup.

While Shiwen has not made a LCM attempt yet and Pickrem focused on competing with her ISL team (London Roar), 4th swimmer Rika Omoto of Japan currently sits 5th in the world with a 2:10.61 from the Berlin World Cup.

Note: this race initially had a “to be confirmed” for the 4th spot, which has now been updated to be China’s Yu Yiting.

Two of the names that buzzed around the 2019 Worlds meet, China’s Sun Yang and Lithuania’s Danas Rapsys, will return in the pool to face-off again. In both the 200 free and 400 free, Yang and Rapsys had noteworthy battles and (not-so-great) finishes.

During the 400 free final, it was Yang who topped the podium while Rapsys missed out on medalling by 0.27s. Later in the meet, in the 200 free final, Rapsys avenged Yang and touched first at the wall. Rapsys was disqualified, though, ultimately giving Yang his 2nd gold medal.

Was there any appearance money offered to any of the swimmers?

Yes, all swimmers get appearance fees and expenses covered.