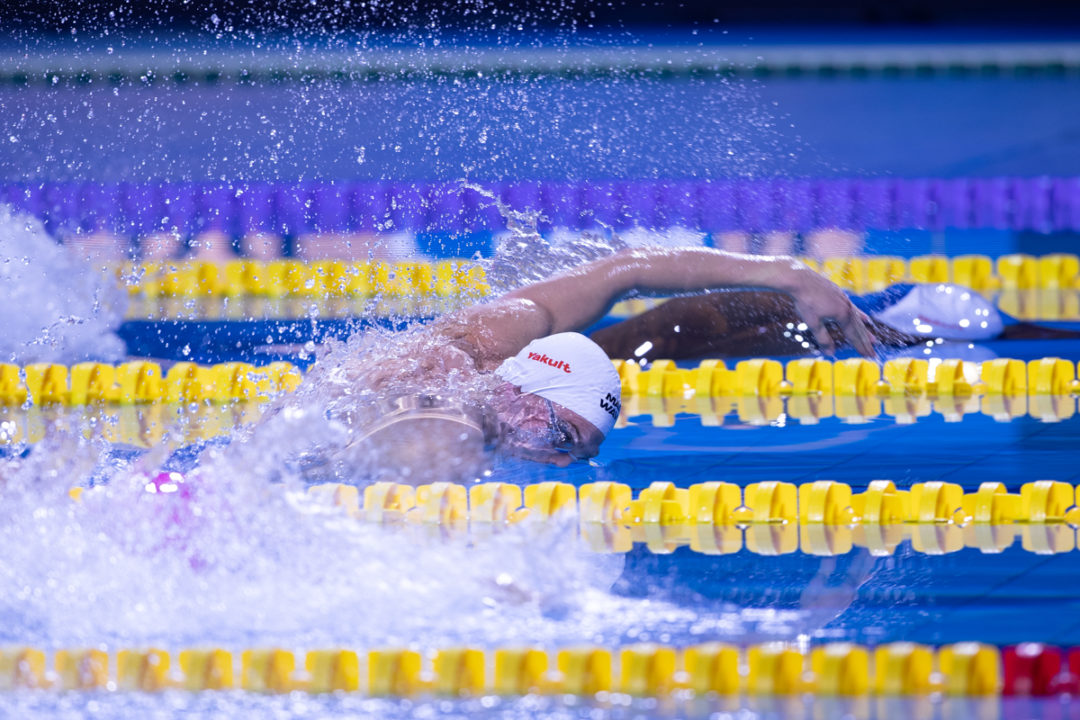 The final day of racing in Beijing will see many of the same matches from Shenzhen, including Vladimir Morozov and countrymate Andrei Minakov in the 100 Free Archive photo via “Rafael/Domeyko Photography”

Day 2 from Beijing promises to have some fantastic rematches between swimmers from Meet 1 in Shenzhen. Ryosuke Irie joins the startlist for event 1, the men’s 100m backstroke, and after yesterday’s tied first-place finish, will look to edge out a win over his competition.

Katinka Hosszu and Liliana Szilagyi will face off again in the 200m butterfly. In Shenzhen, Hosszu was in second place at 150 but stormed down the last 50 to snatch the win. After a heavy schedule across the last week, will she be able to continue that form?

Danas Rapsys and Sun Yang will do battle for the 4th time this week in the Men’s 400m Freestyle. Yesterday, Sun Yang got the edge over Rapsys in the last 50 of the 200 free to claim gold by just 0.2. Russian teammates Vladimir Morozov and Andrei Minakov had a very tight race in the men’s 100m freestyle, with Minakov getting the touch over Moroxov by just 0.08. They go head-to-head again today in the same event.

Ryosuke Irie led from the beginning in this race, setting a faster pace than the rest of the field from the first 50. After his tied-first place finish yesterday in the 100 back, his time of 1:55.55 was a considerable 3 seconds ahead of anyone else.

America’s Jacob Pebley moves up the ranks today, improving on his 3rd place finish in Shenzhen and taking 0.5 off his time in the process.

One of the most exciting races of the day saw Hungarian swimmers Katinka Hosszu and Liliana Szilagyi chase eachother down throughout the race. Last week it was Hosszu doing the chasing down the last 50 after she touched 2nd at the 150 mark. However, today Szilagyi had more in the tank and swam a similar race, splitting 32.97 on the last length to out-touch her teammate.

Michael Andrew took this race out hard today, touching 0.5 faster than the rest of the field at 50 metres. However, he couldn’t hold on to his killer pace in the back end. Matthew Temple attacked this race in the opposite way, coming home faster that he did last week to out-touch Minakov for the win and deliver his fastest time this season.

It was the same quartet in the women’s 50m freestyle and the exact same finish too. Liu Xiang of China held off the competition from sprinting ace Kromowidjojo to finish in 24.03, 0.01 faster than her winning time from Shenzhen and setting a new Chinese Record in the process. Michelle Coleman had one of the standout swims in yesterday mixed freestyle relay (she split 53.89 in the anchor leg for her team) but today couldn’t improve on her 50 time, posting the exact same mark as did last week.

Winner of this event last week, Arno Kamminga was unable to keep up with the pace of new arrival to this event, Ippei Watanabe. The race separated quickly with a gap forming between 1+2 and 3+4. Prenot and Balandin both improved on their times from Shenzhen bu over a second each, however, this time the American swimmer got the edge over his competition by storming down the last 50 metres.

Kira Toussaint completed the double in this event today, the only swimmer to slip under the 60 mark both here and earlier in the week. A disappointing 4th place finish and 3 second addition on to her 200 back yesterday didn’t stop her from turning things around today in the 100.

Katinka Hosszu took a whole 2 seconds off her time from meet 1. She’s had very little time between this and the 200 fly, and now has a very short window until the 200IM.

Sun Yang turned on the heat in this race after 100m and started to form a gap between himself and Rapsys. Last week, Xinjie finished 2 seconds behind Rapsys, but today turned that around. The two swimmers were together until 300m when Xinjie negative split his last 100 and pulled away from Rapsys who couldn’t stick with him.

Dominik Kozmo swam an almost identical swim to that which he did in Shenzhen, although finishing 8 seconds behind the rest of the field.

A much closer finish today in this event, although the same finishing order as meet 1. Sprinting veterans Ranomi Kromowidjojo and Jeanette Ottesen are no starngers to racing eachother, and today showed their class with two sub-26 swims.

Elena di Liddo, who won the 100m fly yesterday, touched in the same time as Shenzhen. Michelle Coleman managed to slip under the 27 mark this time, touching in 26.91.

Russian teammates Andrei Minakov and Vladimir Morozov faced off once again today, but this time it was Morozov who got the edge. He took 0.7 off his time from last week in doing so, claiming his second win of the meet after taking gold in the 50 free yesterday.

Pieter Timmers of Belgium imrpoved on his performance in the 200 yesterday which saw him finish with a 1:51.94, over 3 seconds behind the rest of the field. He slipped under the 49 mark by the finest of margins today to out-touch Chierighini.

A faster race in this event saw Canadian Sydney Pickrem overtake her competition after the breaststroke leg to claim the win. She managed to carve out a slight lead after the backstroke which was enough to hold off the competition this time.

Katinka Hosszu, world record holder in this event (2:06.12), gave herself a lot of work in the last 50 of this race. She was 4th throughout but a 30.18 split on the freestyle saw her come in a snatch 2nd place from the hands of Japan’s Rika Omoto who was a new addition to this event.

As is always the case with a 50, it was impossible to predict who would take the win here. This time is was 33-year-old Joao Gomes Junior who got the touch. As was the case in meet 1 it was all sub-27 swims from this field, with fellow Brazilian Felipe Lima shaving 0.2 off his mark from Shenzhen.

Ducth swimmer Arno Kamminga had the best start of the lot here with strong underwaters and a reaction time of 0.50.

Italian swimmer Martina Carraro was up against home favourite Yu Jingyao again in this race just as she was in Shenzhen and in the 200 yesterday. Carraro has a super back-end in her swims, today splitting the fastest of the lot with a 35.03 and last week winning this event with a 34.90 on the second 50.

Despite her efforts though it was Yu who took this race. Short course (25m) World Record holder in this event Alia Atkinson was marginally slower here despite an excellent turn at the 50.

Michael Andrew got his first win of the meet here ahead of the same competition as he had in Shenzhen. Across this meet and the first one earlier in the week he has had one of the heaviest schedules of any swimmer, racing 3 events yesterday and 2 today. Winner of this event in meet 1,Xu Jiayu, had the best start here with fast reaction times (0.51) and strong underwaters.

This much anticipated race did not disappoint and resulted in a new Chinese Record for Yang Junxuan. Siobhan Haughey, who has taken the win in the 100m freestyle both here in Beijing and in Shenzhen, was unable to stick with the pace set by World Junior record holer in this event Yang Junxuan, although she did have a killer last 50m split of 29.08. Yang won this event last in Shenzhen but improved on her time here, slipping under the 1:55 mark for this first time across this series.

Katinka Hosszu‘s killer schedule seemed to show in this race, although she almost exactly mirrored the swim she did in this event in Shenzhen. Today alone she has raced the 200 fly, 200IM, 200 Free and 100 back.

Rasuke Irie took the 100 back out hard for Team Kapas, giving his team a hefty 2 second lead heading into the breaststroke leg. They took a risk by setting their two male athletes off first, a risky plan which looked to be paying off after 200m with them splitting 2 seconds under World Record pace at that mark.

However, Andrei Minakov turned this race on it’s head as he chased down Boglarka Kapas stroke by stroke putting Team Liu well and truly in the lead. Wang Jianjiahe brought her team home in style in a 56.89 to claim the win for them.

Is there no 4 IM in this series?

The Chinese aren’t playing this Olympic year. Three weeks in to the year and they have two NRs.

Why is no one talking about that 50 free?

Not particularly surprising when she went 24.04 at the Shenzhen stop. Very consistent tho.

It would be nice to see how Knoxville stacks up to China to Australia times to see who actually is swimming “fast” for January!?!

Kamminga is the real deal.

I wouldn’t be surprised if Yang junxuan wins the 200 free at the Olympics based on the trajectory of her improvement.

Titmus, McKeon , Pellegrini and Ledecky and a few others might disagree.

I would be surprised. My guess is she does great times early on the season and then struggles when it counts.

That’s not what happened at the Worlds though where she dropped 1.5 seconds from her best time and actually improved her times through each round, which indicates she swims her best when it counts.