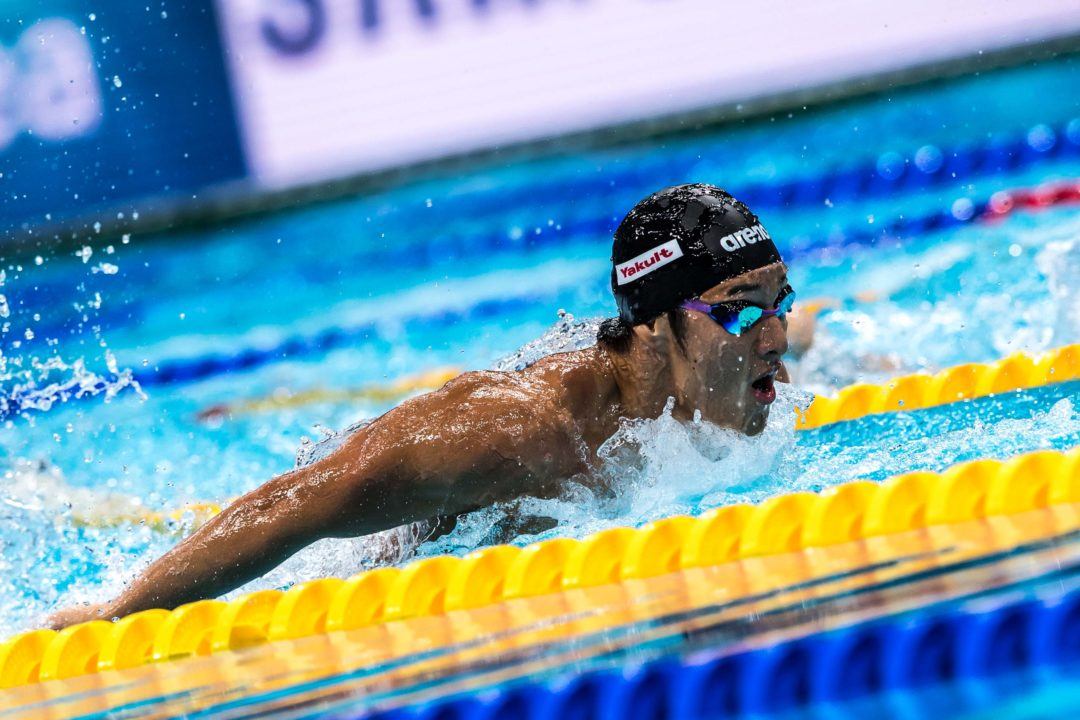 Daiya Seto has set a new Asian Record in the 200 Butterfly on Day 1 of the FINA Champions Series meet in Beijing, China. Archive photo via Mike Lewis/Ola Vista Photography

Daiya Seto has certainly made his mark on day 1 of the FINA Champions Swim Series in Beijing, China, setting a new Asian Record in the 200m Butterfly. Also on the schedule for him today was the 200 IM where he delivered another stellar swim.

Seto set an early lead, touching over 2 seconds ahead of his competition at the 100 metre mark (53.36). His previous best time was 1:53.86 which he clocked at the World Aquatics Championships in Gwangju, South Korea last July. This time won him a silver medal behind 19-year-old Kristof Milak who smashed Michael Phelp’s World Record in a time of 1:50.73.

Just under an hour after setting this new mark, Seto delivered another remarkable swim in the 200 IM, posting a time of 1:55.55. He took 0.6 off his previous best time of 1:56.14 which he again set in Gwangju last year.

Seto has had a fantastic start to this Olympic season, setting a new SCM World Record in the 400IM at the ISL Final in Las Vegas not even a month ago. His stand-out swims from today’s competition place him in a great position not only for tomorrow, but for the rest of the season as well.

Super Impressive , rested or not !!! We just saw in the video in Japanese how Hakamura is training too …..those guys are pushing their trainings .

Milak is getting scared

The “time off” seems to have served him well. I hope he doesn’t burn out before Tokyo 2020, ’cause if he keeps this up he is going to put on a show worth watching.

I think it’s more likely we will see some incredible swims in Tokyo. He’ll be representing his country in front of a home crowd, big hopes and a very hard worker. This is all part of the plan. 1:52 in Jan though? Ridiculous

Most Japanese must be excited to train even better this year ….so its gonna be A Great show

If he can keep that shape this summer he’s on pace to easily win both IM events and take the silver in the 200 fly.

Pretty impressive. Now though he has to stand the test of time and maintain his form until July.

he has got that too me thinks …..he is with Irie the most consistent Japanese swimmer for years now

All this just one month after setting that WR in the SCM 400 IM? He had to have rested for both meets. How much did he train in between? What sort of yardage does he do?

Hey guys, in an article like this, could you put the time he swam in the first paragraph? I had no idea what his time was until I read to the bottom of the article.

Looks like he’s going to do some special times at the Olympics.