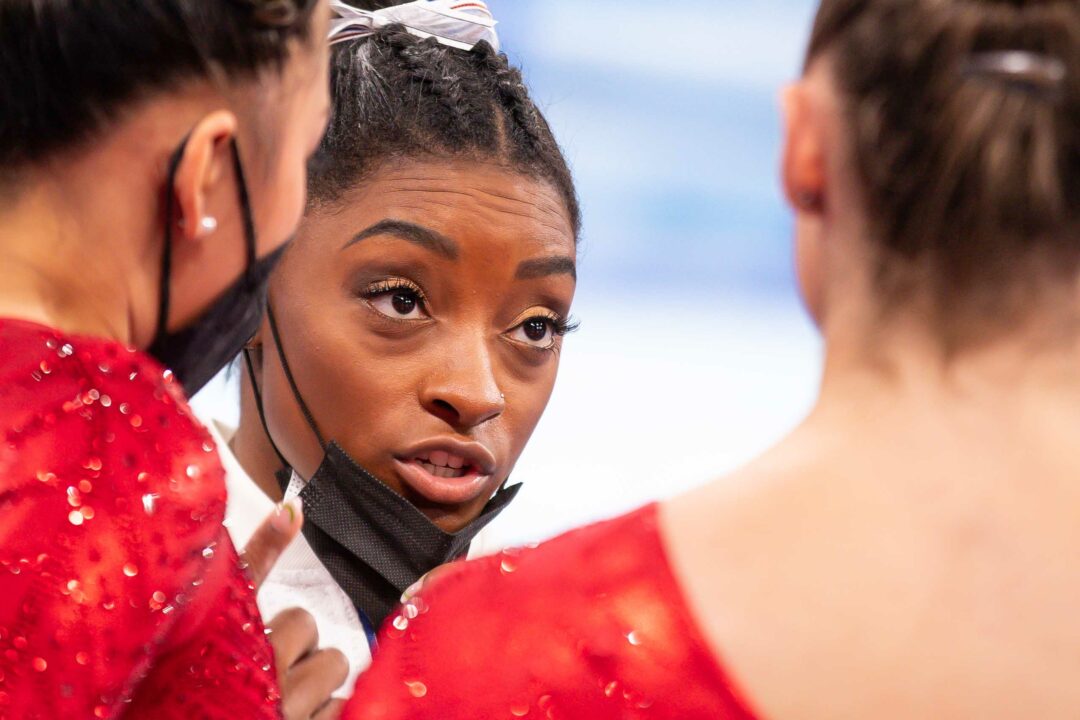 With the Olympic Games now in full swing, this series from SwimSwam looks at some of the leading news outside of swimming as athletes around the globe contest their Olympic events in the Japanese capital. Paralympic news will feature ahead of the Games which are due to begin in Tokyo on August 24th.

Simone Biles has withdrawn from the individual all-around final in Tokyo after pulling out of the women’s team final earlier this week.

The four-time Olympic gold medallist previously cited ‘wanting to focus’ on her mental health as the reason behind her withdrawal from the team final, stating: “After the performance I did, I just didn’t want to go on,” she said.

“We have to protect our minds and our bodies and not just go out and do what the world wants us to do.

“I don’t trust myself as much anymore. Maybe it’s getting older. There were a couple of days when everybody tweets you and you feel the weight of the world.

“We’re not just athletes. We’re people at the end of the day and sometimes you just have to step back.

“I didn’t want to go out and do something stupid and get hurt. ​I feel like a lot of athletes speaking up has really helped.

“It’s so big, it’s the Olympic Games. At the end of the day, we don’t want to be carried out of there on a stretcher.”

She will now be unable to defend her all-around Olympic title on Thursday, July 28th. She is also due to compete in the vault, uneven bars, floor and beam finals from August 1st onwards – but is yet to make an announcement about her participation in those events.

A statement from USA Gymnastics read: “Simone will continue to be evaluated daily to determine whether or not to participate in next week’s individual event finals.

“We wholeheartedly support Simone’s decision and applaud her bravery in prioritising her wellbeing. Her courage shows, yet again, why she is a role model for so many.”

46-year-old gymnast Oksana Chusovitina made headlines this week after she officially retired from her sport after competing in her eighth Olympic Games.

It was an outpouring of support for the Uzbekistan athlete as she received a standing ovation from those in the arena following her performance on vault.

Though her score of 14.166 wasn’t enough to secure her a spot in the final, Chusovitina walks away from the sport a record-holder as one of only four women to become 8-time Olympians in their respective sports.

Speaking to media after her event, she said: “It was really nice. I cried tears of happiness because so many people have supported me for a long time.

“I didn’t look at the results, but I feel very proud and happy. I’m saying goodbye to sports. It’s kind of mixed feelings.

“I feel very good to be here. But this will for sure be my last Olympics. I’m 46 years old. Nothing is going to change it. I’m alive, I’m happy, I’m here without any injuries, and I can stand on my own.”

Her first Games came in 1992 where she won Olympic gold.

Triathlete Flora Duffy made history in Tokyo on Tuesday this week as she won Bermuda’s first ever Olympic gold medal.

Speaking after her win, Duffy said: “To be an Olympic champion has been my dream since I was a little girl.

“Going through my head was relief, coming into an Olympics as one of the favourites. There was a lot of pressure and expectation.

“I guess I also knew that I was Bermuda’s first medal hope in many many years and just something I wanted to achieve for myself and also for my country. I was definitely overwhelmed, I didn’t know what to do, what to think. It was just a really really special moment.

“Bermuda is a small country but very passionate about its sport. I am just so grateful that I could achieve a personal dream here, but it’s bigger than me.

“It is going to inspire the youth of Bermuda and everyone back home that competing on the world stage from a small island is really possible.”

Duffy also said that the year-long postponement of the Tokyo Olympic Games was an advantage for her as she had more time to recover from some existing injuries she was nursing.

She previously finished in eighth place at the Rio 2016 Olympic Games and has nine World Championship titles to her name as well as a Commonwealth Games gold medal.

If Lebron sat out a game 7 bc of pressure I’m sure similar adulation would be heaped upon him. Also, who had goats on all her gear and proclaimed multiple times in interviews that she was unbeatable?

If LeBron had a medical condition that if he played may kill him, no one would heap upon him.

What medical condition? She admitted it was pressure.

She doesn’t know where the ground is when she’s flipping upside down. That gets you killed.

“There were a couple of days when everybody tweets you and you feel the weight of the world.”

Coaches, collect those phones and put them away for a few weeks.

I initially had the tough guy attitude and then my son, 19, explained why he was applauding her and her decision. He’s been to too many funerals at his age burying his friends that couldn’t see the way out of their depression. He grounds me at times.

Do you think that taking everyones’ phones for a few weeks is really pragmatic in 2021?

Does anyone think that separating athletes from their lifeline to their family and support systems at home would be a good idea at this point in the pandemic?

Can’t believe this has created so much fuss. People are struggling to put food on the table in many countries because of Covid. You think the ‘world’ is watching this, more like the 1st world. If Simone Biles decides to not do something because she simply doesn’t like it, it’s really not affecting world peace or kicking anyone’s food bowl. She claims she has mental health issues, well rest up an take it easy. Not that big of a deal.

I wonder if Simone Biles agents and representatives are getting some “unpleasant” phone calls from the corporations who paid her a bunch of endorsement money? They might want some of their money back….. Her next magazine cover photo might be on the next issue of “Psychology Today”…

We used to call it “quitting”, now it’s called “focusing on your mental health”.

This is an awful example to use. Kerri Strugg was “encouraged” by two abusive coaches to continue on an injury, even though they would have won without her second vault, and then she was literally handed to a known sexual predator before she left the mat.

This abuse is exactly what we are trying to eradicate from youth sports. Let’s not glorify it.

For those who don’t know: when Kerri was carried off the podium, she was handed to Larry Nassar. Yeah. Kerri herself regrets this vault because it ended her career and wishes she hadn’t done it.

I have secret to tell you guys…Nobody is watching NBC and Nobody is watching the Olympics…33 year low on their ratings…They need more drama to boost ratings…Every last athlete is now a victim for some reason…Even Dressel has a commercial for migraines.

As a person with debilitating migraines, I’m grateful Murphy is speaking out about migraines and inspired to push myself a little more knowing he suffers from migraines too. We’re not victims; we just have had hideous headaches.

Amazing how people turn on someone for looking out for themselves. A few days ago she was the GOAT and already a multiple time Olympic gold medalist, now she’s being eaten alive online and called a disgrace and a failure? At the end of the day it’s sports, it’s really not that serious and it’s disappointing seeing the swimming community devolve into a bunch of angry children. I figured we would be better than the soccer community but I guess we’re not much better than the English fans attacking the 9 year old German girl online