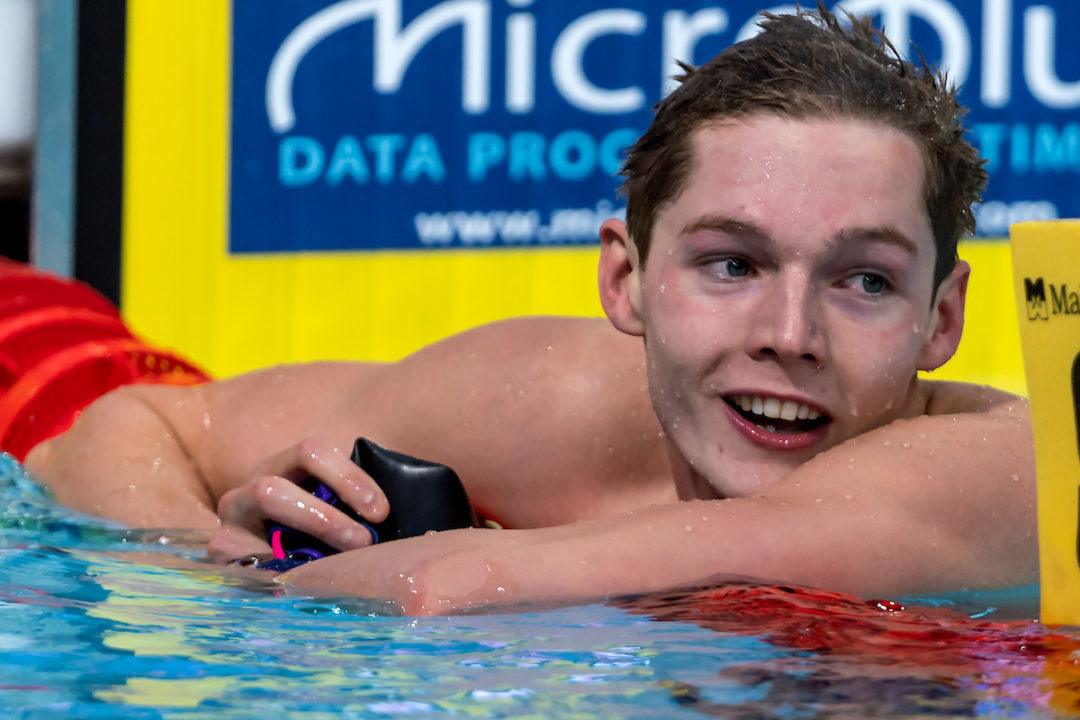 After falling short of the podium here in Glasgow in the women’s 50m fly, 23-year-old Anna Hopkin roared to the wall first in the heats of the women’s 50m freestyle, blasting a new personal best in the process.

The University of Arkansas All American clocked a swift mark of 24.91 to represent the only sub-25 second swimmer of the entire field. Her time laid waste to her previous lifetime best of 25.07 from this same meet 2 years ago where she took the British National title, meaning this is her own personal inaugural adventure into the 24-second zone.

With her outing, Hopkin remains as the 5th fastest British swimmer in history. Her time also inserts Hopkin at the tail end of the top 25 performers in the world this season.

In hot pursuit tonight, however, will be 2017 World Junior Champion Freya Anderson of Ellesmere. The 18-year-old teen titan took the 2nd seed in 25.37 after already nabbing the 200m free gold on night 1 at these British Championships.

Anderson’s time this morning is only .02 outside of her PB of 25.35, so the multi-Commonwealth Games relay and European Championships relay medalist is well on her way to challenging Hopkin for the gold tonight.

Also in the mix is Loughborough’s Emily Barclay, who took 3rd seed in 25.68, although she holds a PB of 24.94 from last year’s Summer Championships. That entered her as the #1 seeded swimmer on the start lists and she’ll be lurking on one side of Hopkin tonight.

15-year-old Bromley swimmer Tamryn Van Selm once again turned heads here at Tollcross, making this fierce final in a morning effort of 26.00. Van Selm’s previous LTB was the 26.27 produced at last year’s British Summer Championships, a time that rendered the teen as the 15th seeded swimmer headed into this meet. She’s now 4th.

However, it’s a not-so-positive commentary on British women’s sprinting on the whole when it takes just a 26 low to make 4th seed. For comparison, the top 8 women at the Italian Championships just a few weeks ago saw 25.88 rank 8th after prelims.

At the French Nationals taking place now, just 2 morning swimmers among the top 8 were over 26.00.

Hitting his fastest time of the season, Olympic finalist Max Litchfield manhandled the men’s 400 IM heats this morning in Glasgow. Entering with a personal best and British National Record time of 4:09.62 fro the 2017 World Championships, Litchfield punched a time of 4:17.30 this morning to carry a little over 4 second advantage over Carnegie’s Mark Szaranek.

Szaranek hit the wall in 4:21.50 for the 2nd seed this morning. Hopefully for him, he’s en route to to at least meeting his personal best of 4:13.72 from last year’s Commonwealth Games. There on the Gold Coast, the former Florida Gator took silver, just .60 behind winner Clyde Lewis of Australia.

Litchfield wasn’t at the Commonwealth Games, having pulled out due to shoulder injury. But, the 24-year-old bounced back quickly, taking 2018 European Championships silver in this event in a big-time 4:11.00, the 4th fastest time of his career.

Younger brother Joe Litchfield will be on the other side of his brother tonight after reaping the 3rd seed in 4:22.23, while 17-year-old Charlie Hutchison continues to impress here in Glasgow by capturing the 6th seed. The Ellesmere teen holds a PB of 4:20.55 to check-in as the 20th fastest British performer of all-time and he’s already within range with a morning swim of 4:23.24.

Hutchison took the silver at this same meet last year, clocking 4:23.57, while Tom Dean won the title. Dean scratched this event, however, to focus solely on his 200 IM race.

A minimum of 4:12.81, however, is needed to even be considered to swim this event at this summer’s World Championships, so it will take a stellar swim from even the national record holder himself to secure a spot on the roster for Gwangju.

Alys Thomas is well on her way to defending her British National title with a solid morning swim of 2:08.47 in the heats of the women’s 200 fly.

Thomas hinted she was in good form at this meet with her somewhat surprise 4th place finish in the 200m free, an off event for her, on night 1. And, the 29-year-old Swansea swimmer delivered on that foreshadow with the only sub-2:10 outing of the women’s 200 fly field this morning.

Plymouth Leander’s Laura Stephens is right there in 2:10.66 to try to improve on her runner-up status from last year’s championships, while Isle of Man’s 50m fly champion here, Charlotte Atkinson, is well-placed as the 4th seeded swimmer in 2:11.72.

For Thomas, the veteran took the 2018 Commonwealth Games title in a wicked-fast time of 2:05.45, but she only needs to drop about a second+ from her morning outing to clear the minimum time standards to qualify for this summer’s World Championships.

For Large, the teen who took World Junior Championships gold in 2017 in a time of 2:07.74 will need to be at that personal best tonight to write her name into the roster.

Of note, Scottish national record holder Keanna MacInnes fell just short of the final, clocking 2:14.57 for the 9th seed. We’ll see if she makes it in via a scratch.

Hannah Miley fought like she always does, still recovering from ankle surgery late last year to put up a respectable 2:14.25 to sneak into the final.

Miley is 15 years older than the 7th seed of the morning, Sophie Freeman of Plymouth Leander, who pounded an AM mark of 2:13.74, a new personal best by well over a second.

The British National Record holder in this event, Duncan Scott, scored the only sub-49 second time of the field in the men’s 100m freestyle, clocking 48.91 to land lane 4.

The University of Stirling standout finaled in this event somewhat unexpectedly at the 2016 Rio Olympics in 5th (48.01) and has been on a tear ever since, placing 5th at the 2017 World Championships (48.11).

He came away with the coveted Commonwealth Games in 48.02 gold over Australian Olympic champion Kyle Chalmers and South African Chad Le Clos and also nabbed silver at the 2018 European Championships in 48.23.

So far this year, Scott has thrown down some 48-low splits on relays at domestic meets, so the signs were there his speed was feeling good. This morning he went out in 23.25 and brought it home in 25.66 to set himself up as ‘the hunted’ tonight.

His teammate Scott McLay is ready to get on the podium as well, clocking 49.40 this morning, the fastest time of his career by about half a second.

Finishing just out the top 9 is 16-year-old Matthew Richards of Royal Wolverhampton. One of our pre-meet swimmers to watch, Richards produced a morning effort of 50.29, beating his previous personal best of 50.57 from last year’s British Summer Championships.

In fact, Richards’ time this morning now checks-in as a British Age Record in the event.

Another age record went down for 14-year-olds, courtesy of Jacob Whittle of Derentio Excel. Another one of our pre-meet swimmers to watch, this kid blew up a 50.40. Look for separate posts on these age records.

Of note, Ben Proud wound up no-showing his heat of this men’s 100m free.

The men’s 1500m free will included in tonight’s finals recap.

50.40 at 14 year-old in the 100 free is incredible. Curious to watch him swimming in the Transitional Final.

Jacob Whittle going a 15 year old record of 50.4, hopefully can do even faster tonight.

Hopeful Scott can go sub 48 tonight, but he has no one to race. The 400 free relay looking thin at best.

He’s still 14 for ages too; Precocious talent. Thought the 100 was a lot better than previous years – Thin at the top, but juniors a lot faster than previously. Two Age group records there for 14 & 16 I think.

Listed as 15 on results, still absolutely ballistic. Second quickest of all 18 and unders.

Depth wise way better, certainly hope for the future, but struggle to see how we put together a competitive relay for this summer, unless McLay and Thorpe drop a lot of time tonight. Might be best sitting it out and saving Scott and Guy for the 800 relay.

They give the date a swimmer will be on 31st December. I spoke to somebody who knows him at summer champs last year and he was 13 at the time.

Confused as to what youre replying to? Ha

Scott’s best times seem to come in right races though (eg. Europeans in the 200) and he often struggles in prelims. He might prove me wrong and go 47 tonight, but he normally seems at his best in tight races.

A 26 qualifies fourth into finals? Please tell me that’s wrong.

Not wrong, but I hear you!

*claire Curzan walking up to the blocks ready to swim fly*