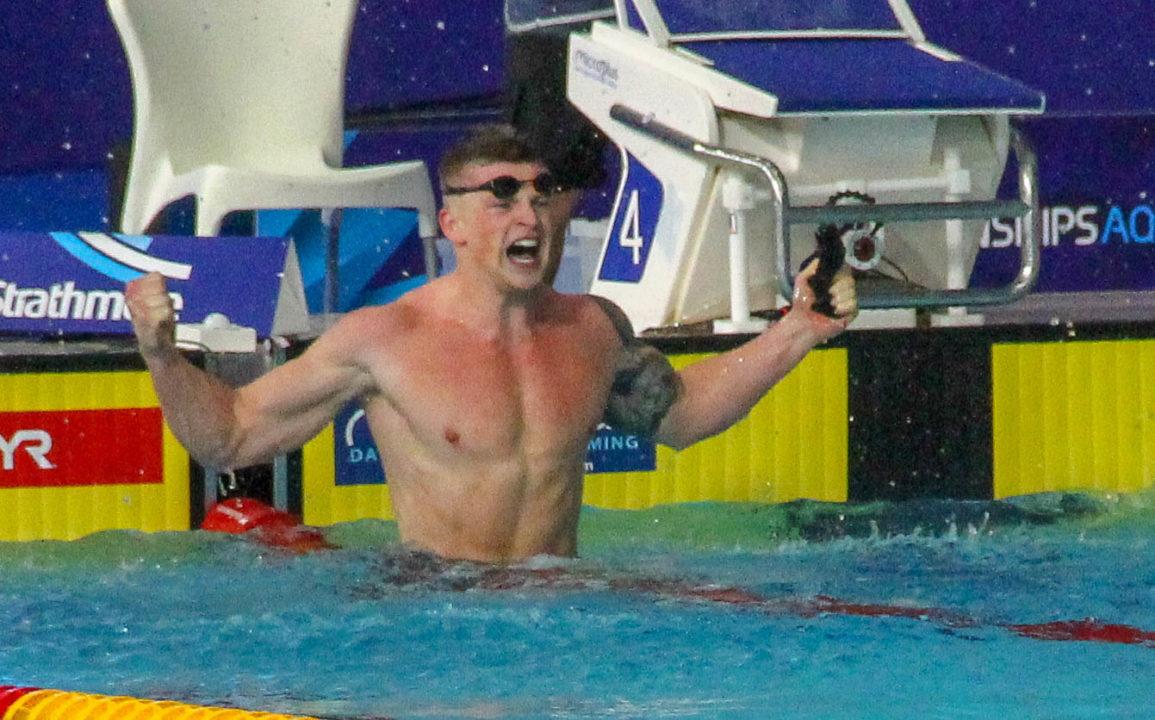 Adam Peaty is headed towards possible history tonight in the men's 100m breast after already clocking 58.55 in prelims. Archive photo via Giusy Cisale

In a raw sprint from start to finish, Commonwealth Games gold medalist Sarah Vasey took 50m breaststroke gold here in Glasgow. Clocking a time of 30.72, Vasey crushed her morning effort of 31.32 to check-in with a performance among her 10 best. She won Commonwealth gold in a time of 30.60, so she was just over a tenth off that mark tonight and the only swimmer to dip under the 31-second threshold.

Vasey was last year’s bronze medalist in 30.93. Her time now checks the Loughborough swimmer in as the 8th fastest performer in the world this year, sitting behind fellow Brit Imogen Clark, who had to drop this event due to injury.

Runner-up status went to Stockport Metro’s Katie Matts, who followed up her 32.03 from this morning with a near-personal best of 31.44. Her lifetime fastest remains at the 31.20 she logged at last year’s British Championships that ranks her the 12th fastest British performer of all-time.

As for 18-year-old Tatiana Belonogoff, the Guildford City swimmer rocked a bronze medal tonight, stopping the clock in 31.46. She was 31.29 en route to gold at last year’s European Junior Championships.

In a mild upset, Thomas Howdle of Stockport Metro beat out Newcastle’s Nicholas Pyle to take the men’s 50m backstroke British national title tonight. Leading the field with a morning mark of 25.62, 22-year-old Howdle unleashed a 25.23 for gold, his personal best and a time that makes him the 6th fastest performer in British history.

Pyle won this 50m event at last year’s British Championships and followed that up with European Junior Championships bronze in the 100m back last year. Pyle’s time at the 2018 version of this meet was 25.45, so he was just off that tonight in 25.48.

Here are the only performers faster than Howdle’s gold medal-winning 25.23 tonight:

Post-race, Howdle said, “I only picked up this event this season, so I’m buzzing.”

Swansea’s Liam White punched the wall in 25.60 for the bronze, his fastest time by .18. Of note, Xavier Castelli of Cardiff squeaked into this final by way of a scratch and made up some ground, finishing 5th in 25.80 tonight.

In a race that literally went down to the touch, 18-year-old Freya Anderson of Ellesmere collected her first British national title of 2019 with a 200m freestyle stunner down the stretch to top the podium in 1:58.22.

Starting out in front with a lead-off 100m of 57.77, Anderson held a lead of over a tenth ahead of last year’s winner Kathryn Greenslade (57.89) and Holly Hibbott (58.15) and she managed to hold on, despite a big move from Hibbott at the end.

Hibbott, the 400m freestyle silver medalist from the Commonwealth Games, waited just a moment too late to try to overtake Anderson, instead settling for silver tonight .01 back in 1:58.23.

Anderson’s time tonight is her 2nd fastest ever, as she was 1:58.19 just this year at the Edinburgh International Meet. Of her race, the Ellesmere Titan stated, “I’m happy with gold, but would have preferred to go quicker.” She’ll be focusing on her 100m free specialty here.

Georgia Coates clocked 1:59.40 for bronze, although none of the top 3 finishers came close to the 1:56.66 minimum time qualification #2. It also appears that the women’s 4x200m freestyle relay will most likely not qualify for the World Championships with the performances tonight.

In one of his best moments ever in the pool, 23-year-old Daniel Jervis took the men’s 400m freestyle and ran away with it, clocking a mega personal best time of 3:47.57 to take the gold medal ahead of some very season competitors.

Jervis’ time tonight wipes out his previous personal best of 3:48.08 from 2018 and moves him into the 10th slot, tying Elliot Clogg as the 10th fastest British performer ever in the men’s 400m free. In the season’s worldwide rankings, Jervis is now 13th.

Aimee Willmott nabbed the first official qualifying standard of the night, taking the women’s 400m IM in a mark of 4:36.98. That should be enough for consideration, as it falls under the 4:37.01 selection standard #2, but we’ll wait for British Swimming to make the call post-meet.

The University of Stirling swimmer fought for every inch of this race, holding off runner-up Abbie Wood and the versatile veteran Hannah Miley. Wood touched in 4:40.44 for silver, while Miley hit 4:42.68 for bronze. For Miley, the 3-time Olympian is just getting back in the groove of racing after undergoing ankle surgery last fall.

On the Gold Coast, the pair of Willmott and Miley finished 1-2 in the 400m IM; Willmott topped the podium in 4:34.90 to Aberdeen Miley’s 4:35.16. Wood is actually the 3rd fastest British performer ever in this event behind the aforementioned, holding a lifetime best of 4:37.25 from this same meet 2 years ago.

Willmott’s effort checks-in has her season-best, beating out the 4:40.93 she put up at the Edinburgh International Meet. It rockets her from 21st place to 5th in the world rankings.

15-year-old Katie Shanahan of City of Glasgow turned heads once again by crushing a lifetime best swim en route to 5th place tonight. The teen threw down a best time this morning in 4:50.09, but blew that to bits with a night swim of 4:46.62. That is getting close to Rosie Rudin’s Age Record of 15-year-olds held at 4:43.56.

Adam Peaty is simply a menacing swimmer, beating the field to and from in this men’s 100m breaststroke sprint. He opened this 58.55 time this morning with a 26.90 stunner, but crushed that to a first 50 of 26.63 tonight to ultimately touch in 57.87.

Peaty’s time takes over the world rankings throne by a mile, displacing former season king Ilya Shymanovich of Belarus with his 58.29.

For James Wilby, his time easily clears the World Championships selection as well, with the Loughborough teammate touching in 58.66 for the 2nd fastest time of his carer by just .02. 58.64 is what Wilby put up behind Peaty’s 57.10 World Record at the 2018 European Championships.

University of Stirling World Championships medalist Ross Murdoch got some steam in the water as well, finishing with eh bronze in 59.21, also a time under the selection time #2.

Looking forward to some backend speed from Peaty. Could be a nasty time

Surprisingly good in the 50bk from Howdle – Chopped a second off his PB today. Nice to see swimmers back up SCM breakouts.

Women’s 200 was… interesting; The expected result, but not the times. Alys Thomas looks brilliant. 200fl for her is going to be electric. Nice to see Georgia getting back after a few iffy seasons. Anderson’s first comment post race was the same as mine: “Aah I can go faster than that”, looked disappointed.

Does it mean that there will be no British swimmers competing in W200FR in Gwangju? If it is so then it will make easier the task of getting to the final for swimmers who have doubles at the day of semifinal of 200FR (Ruck, Ledecky…)

It depends how BS go about allowing athletes to swim in ‘secondary’ events if they qualify in others, but as of right now, nope.

I think Hibbott and Anderson will compete as long as they qualify in other events.

I imagine they will send a 4x200m Women’s team as the WCs are the qualifying event for the Olympic Games…so that might change things.