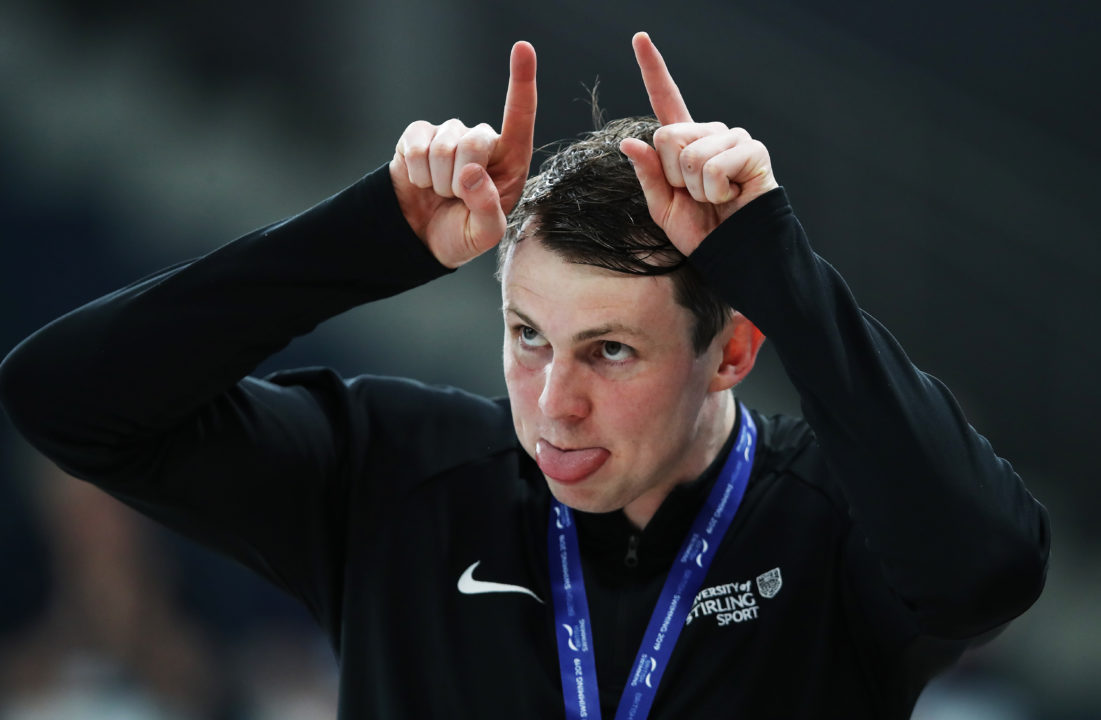 It's no secret that British Swimming set some very high qualification standards for the World Championships, but athletes like Ross Murdoch rose to the challenge and made the squad anyway. Current photo via Ian MacNicol for Scottish Swimming

After all is said and done with the 2019 British Swimming Championships, a 25-swimmer roster has been revealed for this summer’s World Championships in Gwangju, Korea.

Among the lineup, just 5 individuals won specific events and also got under the British Swimming-mandated automatic selection time: Adam Peaty in the men’s 100m breast, Daniel Jervis in the 1500m free, Max Litchfield in the 400m IM, Duncan Scott in the 100m free, 200m free and 200mIM and finally James Wilby in the 200m breast.

However, an additional number of athletes were selected for the roster based on achieving a British Swimming-mandated consideration time in their event or by earning 2nd place in their event still under the selection time. Those in this category include Molly Renshaw, Alys Thomas, Ross Murdoch, Ben Proud, Luke Greenbank, James Guy, Freya Anderson, Aimee Willmott, Tom Dean and Siobhan-Marie O’Connor.

To add yet another layer to qualification process, the British Swimming selection policy specifies 8 wild card spots that would be at the coaches’ discretion, factoring in the need to qualify relay teams for the 2020 Tokyo Olympic Games, the use of alternates to rest key athletes, etc. Among those swimmers identified in this grouping include Jess Fullalove, Anna Hopkin and Scott McLay.

You can review the entire roster as a refresher here.

British Swimming tells SwimSwam that individuals’ specific events will not be revealed until the day before competition begins in Korea. As such, look for another analysis post shortly, detailing who we think will be selected to swim which events based on times, other athletes nominated for the roster, etc.

Below, however, is a snapshot view of who was selected specifically based on the supposedly black-and-white qualification system. I’ve included data to compare who would have made the list had British Swimming utilized the FINA A standard as the QT as opposed to its ultra-stiff selection standards.

Had the FINA A standard been used, 8 swimmers not on the list below would have qualified for individual events, with 6 of them being female and 2 male. Chloe Golding, Jocelyn Ulyett, Katie Matts, Charlotte Atkinson, Alicia Wilson and Abbie Wood would have all made the World Championships line-up in their respective events listed below, as they dipped under the FINA A cut.

For the men, David Cumberlidge and Mark Szaranek would have made the grade if they competed for any other nation using FINA A cuts as the qualification criteria to make the Worlds roster.

Every international meet the US has a significantly better team presence than other nations, they would anyway, but these insane selection standards only widen that gap.

The US could choose to do this as well but they don’t, you would think other nations would take note.

Specifically I look back at the men’s 400 free in 2012 when Vanderkaay and Dwyer both swam 3:47s at trials. In London, they ended up finishing 3rd and 5th. With qualifying times similar to those above they would have been left home, what a waste it would have been.

At least they showed a little more flexibility than the French.

Flexibility based on the need to distract from poor management? Dan’s comment is quite correct. France, The Brits and Canada should consider taking the best they have while working to improve the next level. Kill the “Olympic Dream” and far too many thinking athletes (and their parents) will move to other sports.

Have anyone asked themselves how this looks for younger swimmers (children), does it make them more eager to try to swim harder or does it lead to fewer children starting with swimming and does this cause children to quite earlier?

If you play two sports and one is swimming then this would be a red flag. It proves that being British Champion and having a FINA A cut won’t get you to Worlds or Olympics.

I think it depends on your mindset. It may cause you to struggle or really begin to push to better.

You don’t think being British Champion and Fina A cut is enough? In the last few years a number of swimmers have been left off teams where they would have made a final or even got a medal (the most egregious example being Euros 2016 where British Champions were left off the team for a home championships because selectors thought they wouldn’t have won an Olympic medal. There were a number of swimmers who missed out on a Euro medal though this. That is unethical and limits competition and peoples ability to make a living.

British Swimming is funded very well (revenue of nearly £11m last year), as is all elite Olympic sport in the UK, they’re just not producing the same results as the sitting down sports.