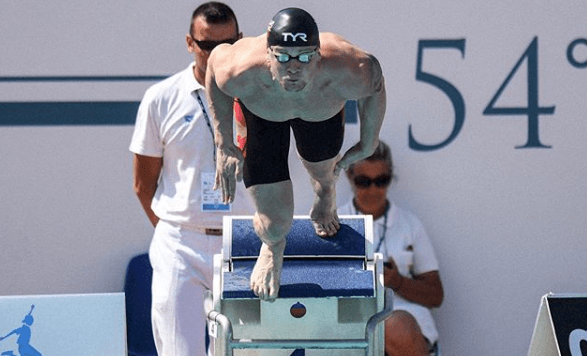 Based on their performances at the 2019 British Swimming Championships, a 25-strong squad has been selected to represent Great Britain at the 2019 World Championships in Gwangju, Korea this summer. Look for follow-up posts giving more insight into the team members. Archive photo via Fabio Cetti - Kcs Media s.r.l - www.facebook.com/kcsmediasrl

Based on their performances at the 2019 British Swimming Championships, a 25-strong squad has been selected to represent Great Britain at the 2019 World Championships in Gwangju, Korea this summer. Below is the break-down of the different tiers of selection, but look for follow-up posts giving more insight into the team members.

Of the line-up, 5 swimmers were automatically qualified based on their gold medal-winning performances that dipped under the stiff British selection time. Those names include Adam Peaty, Daniel Jervis, Max Litchfield, Duncan Scott and James Wilby.

An additional 12 swimmers achieved the British Swimming-dictated consideration time in their respective events and have also been selected to compete at Worlds this summer. Those in this category include the likes of Ross Murdoch, Ben Proud and Aimee Willmott.

Finally, the remaining 8 slots were discretionarily picked by British Swimming brain trust Chris Spice and Bill Furniss. University of Stirling’s Scott McLay was handpicked due to his promising time drops over the course of the championships, while Laura Stephens produced a lifetime best in the 200m fly.

Additional athletes, such as 2016 Olympian Cameron Kurle, were added for relay members.

“We had another great British Championships in Glasgow where we saw some exceptional individual performances from our established group of senior swimmers.  In particular Duncan Scott, Adam Peaty, James Wilby, Max Litchfield and Ross Murdoch continued to show their class.  And of course, who could forget the brilliant 1500m Freestyle swim from Dan Jervis that had everybody on their feet and really set the Championships alight.

“The selectors were also pleased to see that some younger athletes have grabbed the opportunity that we gave them at last year’s Europeans to step up and make this team. We saw superb lifetime bests from Luke Greenbank, Tom Dean, Anna Hopkin and Jess Fullalove, that really built on those performances from last year. As we look towards Tokyo, the challenge now for the whole team is to move this on in the summer and swim a season’s best under the spotlights in Gwangju.”

With a top 12 finish in relay events securing a spot at next summer’s Olympic Games, Spice added:

“In terms of our discretionary selections, this year a key consideration was the need to qualify our relays for the Tokyo 2020 Olympics, whilst resting those relay athletes that could have large schedules in Gwangju. Having said that, the stand out swim from this category was Laura Stephens in the 200m Butterfly, who just missed the World’s individual consideration time by 0.05%, so she fully deserves her inclusion.

“Now that the team is finalised we will head to a team preparation camp in June, with all athletes and staff getting together for two legs of the Mare Nostrum series in Canet and Barcelona. We have also been fortunate to secure our pre-World’s holding camp in Yokohama this year, which will also form a dress rehearsal for our preparations for Tokyo 2020.”

As an example of what discretionary selection means, McLay stated:

“I’m over the moon! This was one of my targets at the beginning of the season and the fact I’ve been able to achieve that shows that my hard work in the pool has paid off. I’m looking forward to going even faster at Worlds now and it gives me the confidence that the work I’m doing will carry forward to next year, which has always been the target.”

The British Swimming team for the 2019 World Championships in Gwangju:

The athletes above gained selection after they won their event and achieved the qualification standard at the British Championships 2019 as per Table 1 of the selection policy.

The athletes above gained selection at the discretion of the GB Head Coach and National Performance Director. The criteria for these decisions included the need to qualify relay teams for the 2020 Tokyo Olympic Games; provision of relay cover and alternates to rest key athletes that have large schedules; potential to make the Tokyo 2020 Olympic team; individual performances over the last 12 months and performances at the 2019 British Swimming Championships.

Coaches selected to the British team for the 2019 World Championships:

One thing that may breaks down gbr is brexit. There is high chance Scotland and Ireland leaves gbr in that case is game over for the relays and some medal hopes

A. Ireland isn’t in Great Britain but even if it was I don’t know of any Irish swimmers who would make the team barring maybe Shane Ryan and he wouldn’t make much difference anyhow
B. Scotland don’t leave Great Britain when Great Britain leaves the EU. Its an Independence movement which already had a vote in 2014 to stay as part of GBR. I doubt another vote happens and even if it does I doubt they leave

I asked that because I saw some news that if Brexit happens.. Scotland will have another referendum as the majority of Scotland voted Pro-EU, not Pro-Brexit

It’s an interesting question. Totally separate of the independence debate, Scottish Athletics are already lobbying to field a Scottish team at European Championships. Not sure how far they’ve got with that though. Also somewhat ironic that on winning the 400 IM at the 2014 Commonwealth Games in Glasgow Dan Wallace shouted Freedom! Would he (or anyone else) have given away the Olympic medal won two years later as part of team GB for that “freedom” is the question.

Nobody considering that swimming both 3 rounds of 100 free and 3 rounds of 200 Im and at least the 800 free relay final at Worlds, in the same days, and after – hopefully – 3 rounds of 200 free will be tremendously challenging for Duncan Scott?

Feel as though david cumberlidge has been hard done by. 06 off 100 pb and. 09 off 50 pb with pyle making it in further away from his best times than that plus joe litchfield beating him in the 100 back.

Could have used him just to swim the 4×100 free relay as well, likely not competitive this year but with the relays being used to qualify for tokyo they could be missing a trick especially with the potential matt richards and jacob whittle have

Two things.
1. GB have the bases of a good relay for the women’s 4×200 free. A team of Coates, Thomas, Hibbott and Anderson would probably do relatively well in the final.
2. I wonder who gets 2nd spot on men’s 100 fly, Scott McLay or does Duncan Scott want to try for an extra event.

Does Hibbott have a medal chance in 400?

Is she in the mix right now?

Honestly, no. She’s good but her events are seriously tough, and she’s not there yet. It’s not to say she doesn’t have the potential, but BS seem to have a crystal ball to see exactly who’s going to make it and who’s not…

I’m not quite sure how Davies made it to the “Consideration” bracket: the women’s medley relay didn’t qualify (if it had, Ulyett would have gone also as the breaststroker?), and she didn’t hit the CT in the individual. Maybe as part of a theoretical mixed medley relay line-up?

Other than that, the selection makes some sense, and it’s obvious BS are looking at having plenty of relay options to give Guy and Scott a rest in prelims where possible, hence Kurle and McLay – both of whom I mentioned as possibles in the other thread, with the latter also having made some really good time drops at Trials. Hibbott and especially Coates on the team suggests they want a women’s… Read more »

Ha! But by the official rules BS could stick him in the 200 fly if they wanted 🙂

What is the criteria for coach selection? Danish team has 4 coaches for 12 swimmers and British one – only 6 for 25. What is the need for coaches at the meet except of making relay decisions? If it is the budget consideration then will it make sense to send extra swimmer instead of extra coach.

Does anyone know if those that missed the consideration times will be entered for their favoured events? Eg Guy 100 fly? Davies 50 and 100 back? If that’s a yes, then it will be interesting to see if they choose Dean or maybe Litchfield (British record holder and who obviously had an off day at trials) for the 200IM alongside Scott.