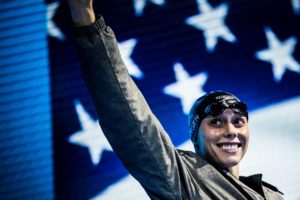 The 800 free was the first of 9 scheduled entries for Flickinger this weekend. Men’s 800 free #2 seed Akram Mahmoud has also scratched.

Loughborough’s Luke Greenbank, the bronze medalist in the 200m back at this year’s World Championships, helped power his squad to the BUCS combined trophy.

Duncan Scott threw down the 2nd fastest 100m free anchor of all-time at this year’s World Championships, but this weekend he has BUCS on his mind.

Elijah Winnington was the big winner of the visiting Aussie & British squads who raced at U.S. Nationals, with the Bond swimmer nabbing 2 golds.

This morning the prelims of the men’s and women’s 200 IM and 50 free will be contested.

Hannah Miley, Kieran Bird, David Cumberlidge and more were in action in Glasgow for day 3 of the British Summer Championships.

South Ayrshire swimmer Katie Robertson clinched the 50 fly win in the best time of her young career, dipping under 27 seconds in the process.

Hannah Miley and David Cumberlidge started the 2019 Scottish Nationals off in style, collecting a gold medal each in Aberdeen.

The 2019 Glasgow International Swim Meet got underway tonight at Tollcross.

Siobhan-Marie O’Connor will aim to add her name to Great Britain’s World Championship roster tonight in the women’s 200 IM.

No Scratches Heading Into Day 3 Finals of British Champs

With no scratches to report, Daniel Jervies, Alys Thomas, and Duncan Scott will aim to defend their 2018 British titles.

The Edinburgh International Swim Meet is truly living up to the ‘international’ part of its namesake, as athletes from Spain, Denmark and beyond will be joining a strong British contingency at the Royal Commonwealth Pool this weekend. Among them is new mom Jeanette Ottesen of Denmark.