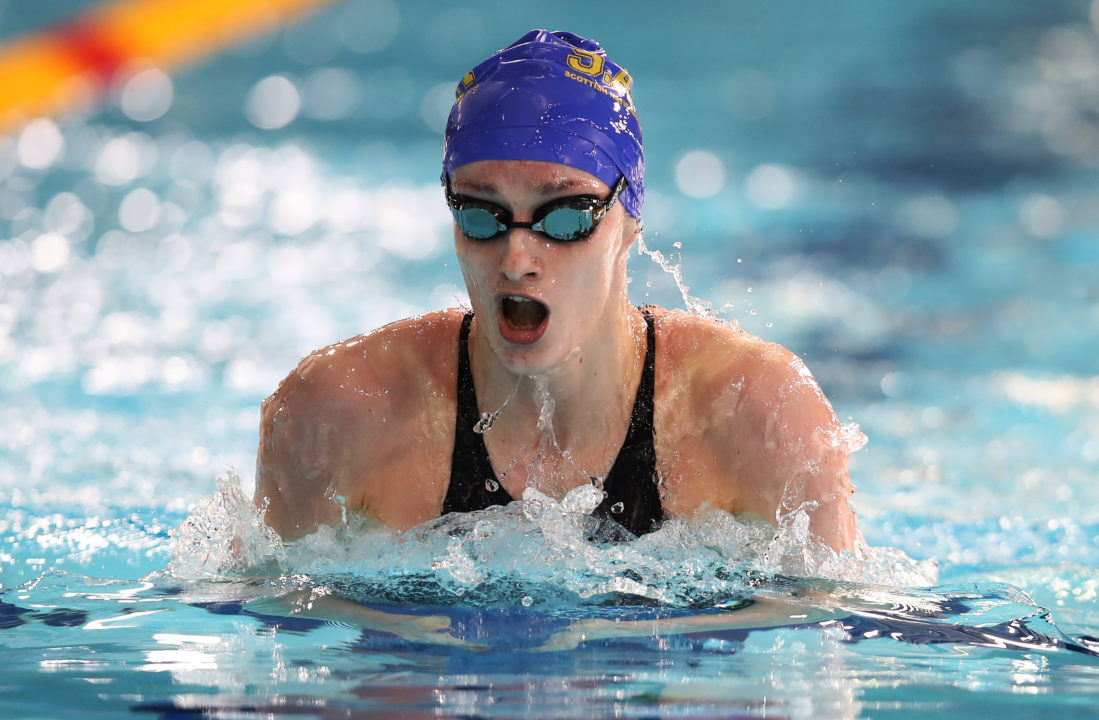 South Ayrshire swimmer Katie Robertson clinched the 50 fly win in the best time of her young career, dipping under 27 seconds in the process. Archive photo via Ian MacNicol for Scottish Swimming

The winningest Scottish athlete ever at a Commonwealth Games, Duncan Scott, made his one and only appearance at these Nationals with a solid swim in the 200m IM today.

After establishing himself as the top seed in 2:02.39, the 22-year-old University of Stirling standout punched the wall in 1:59.80 in tonight’s final to take the title by over 4 seconds. Scott holds a lifetime best of 1:56.65 produced at this year’s British Championships, a mark that slots the swimmer as #2 in the world behind Aussie Mitch Larkin heading into Gwangju next month.

Aberdeen veteran Hannah Miley powered her way to the gold in the women’s 400m free in 4:17.98, taking her 3rd title of these Nationals. She already topped the podium in the women’s 200m IM last night along with the 400m IM on night 1.

Miley also contested the 200m breast where she finished in a time of 2:30.53 behind winner Kara Hanlon of Edinburgh. Hanlon clocked 2:30.15 for the victory, doubling up on her 100m breast win from night 2. Hanlon holds a PB in the event of 2:28.36 logged at the 2018 British Championships.

The 4th fastest Brit ever in the 50m freestyle, David Cumberlidge of Edinburgh, took the top seed of the morning in the splash n’ dash in 22.24. His PB rests at the 22.00 clocked at the 2018 Commonwealth Games, while he earned runner-up status to Ben Proud at this year’s British Championships in 22.09.

Tonight, Cumberlidge was slightly slower than the AM, touching in 22.29 with his partner-in-crime in this event, Jack Thorpe, taking silver in 22.75. Stirling’s Calum Bain was also under the 23-second threshold in a time of 22.98 to round out the top 3.

In the final individual event of the night, Katie Robertson fired off the fastest 50m fly of her career, crushing the field in a time of 26.92. That represented the only sub-27 second time of the final, but also her very first time under that barrier. The 17-year-old’s previous personal best rested at the 27.27 produced just recently at the Mare Nostrum in Barcelona.

Robertson’s time tonight also moves her up on the all-time British performers list, now inserting the South Ayrshire swimmer into the 16th spot on the rankings. She also now checks-in as the 4th fastest European female 17&U for 2019.

Nice to see Dawson back swimming well after her problems.

Good sign for Scott considering he’s not great in season.

Kind of crazy to think that the top two 200 IM swimmers in the world this year likely won’t swim it at Worlds.

Larkin is a wuss and scott has the 100 free

I would argue Scott has a better shot at winning the 200 IM than he 100 free though.

Not sure if something has changed, but I think Scott intended to swim the 200IM a while back. Might free up a spot for Litchfield though.