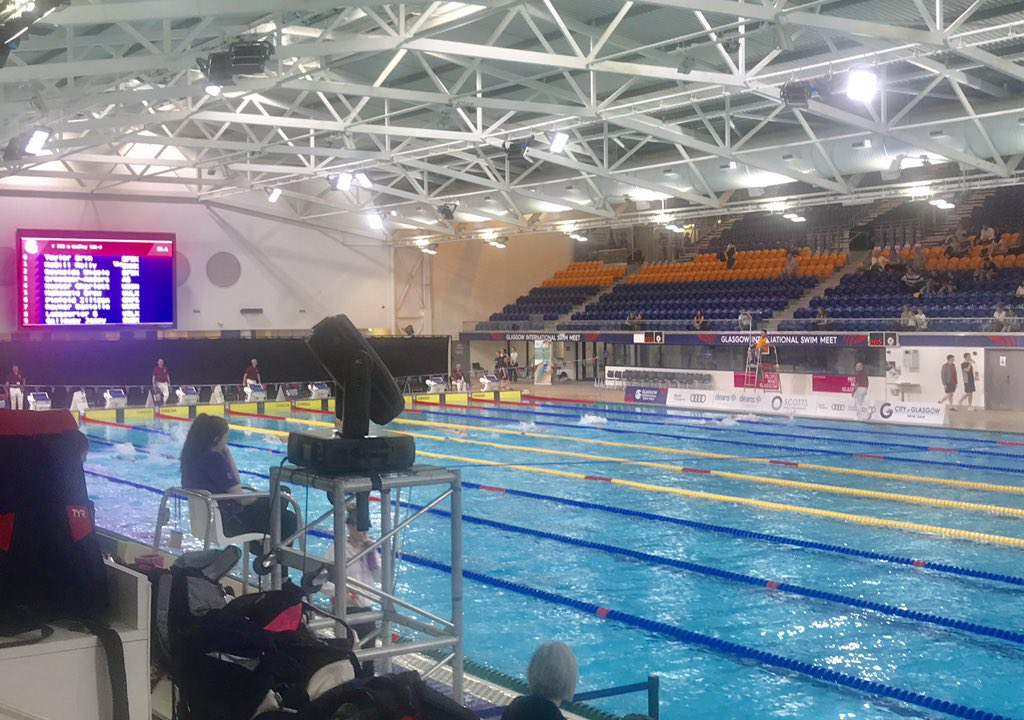 The British rosters for this summer’s World Championships, World University Games and junior elite international meets have already been decided, so racers in the Tollcross pool at this Glasgow International Swim Meet are fine-tuning their craft ahead of the championship season. Of note, Stirling athletes Duncan Scott, Craig McLean and Martyn Walton were last-minute withdrawals from the meet, citing illness.

Several other Stirling swimmers were indeed in the pool, however, including 2018 Commonwealth Games champion Aimee Willmott. The 26-year-old Gwangju-bound swimmer clocked a winning time of 2:15.10 to take the women’s 200m IM ahead of visiting Greek athlete Nikoletta Pavlopoulou.

Pavlopoulou registered a mark of 2:16.22 for runner-up in the race, matching exactly her Greek National Record-setting outing produced at the 2019 Greek Winter Nationals this past March.

Another teen entered the top 3 in the women’s 200m IM race by the name of Katie Shanahan. Just 14, Shanahan turned heads during the British Championships by breaking the British Age Record in the 200m IM, as well as the Scottish Age Record in the 400m IM. She wrangled up bronze here in 2:16.48, just over a second off of her 2:15.29 record-setting performance at this same pool last month.

Scottish national record holder Tain Bruce did her thing in the women’s 100m fly event to top the podium. The 21-year-old Edinburgh swimmer punched the clock in a time of 59.22 to represent the only swimmer of the field to venture into sub-minute territory.

Bruce holds the Scottish standard with the 58.92 she produced last year, but managed to fire off just a 59.49 at the British Championships for 6th overall.

Tonight it was 200m fly World Junior Champion Emily Large who secure silver behind Tain in the women’s 100m fly, stopping the clock at 1:00.29

Georgios Spanoudakis took the men’s 200m IM win in a time of 2:03.36, topping Stirling’s newest team member Mark Szaranek by just under half a second. The 23-year-old joined Stirling just last week after having graduated from the University of Florida. He finished with the silver here in 2:03.36.

Sheffield’s Cameron Brooks-Clarke was tonight’s 100m fly winner for the men, hitting the wall in 54.90. 16-year-old Rasmus Nickelsen of Denmark was next in line with a time of 55.27.