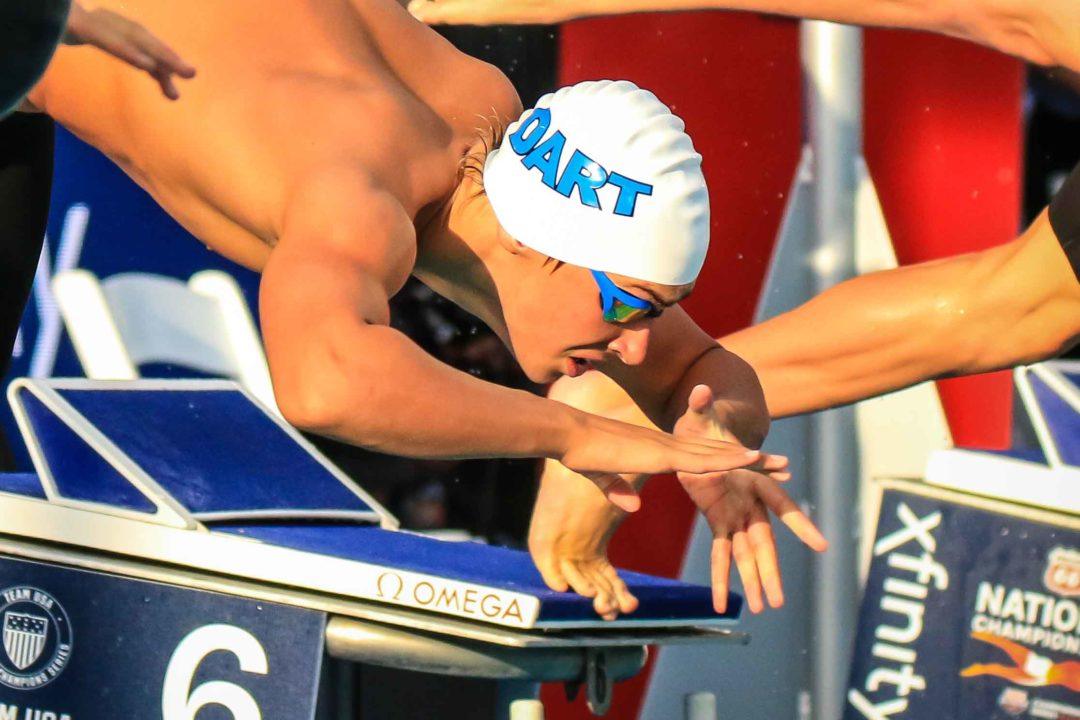 Urlando has dropped two and a half seconds since last summer, and already ranks #6 in USA Swimming history for the 17-18 age group. Archive photo via Jack Spitser/Spitser Photography

One big highlight from prelims of the Mel Zajac Jr. International Meet: 17-year-old Luca Urlando bettered his personal best in the 200 free for the third time this year, suggesting he may have similar drops coming in his primary butterfly events.

As of last summer, Urlando’s best time in the 200 meter freestyle was 1:50.08. And that swim itself – coming on an exhibition relay at Junior Pan Pacs – was already a huge drop from a previous best of 1:52.51. Urlando has already cut two-and-a-half more seconds from that 1:50 in 2019, with the year not even half over.

Urlando went 1:49.51 at the Knoxville Pro Swim Series in January, then 1:47.73 at a Sectional meet in February. This morning at the Mel Zajac meet in Canada, Urlando went 1:47.56. He’s the top qualifier into tonight’s final, where he can push for an even bigger time drop. Below is a look at Urlando’s lifetime-bests in the 200 free over the past two years, which have seen a whirlwind of time drops:

Urlando is better-known for his butterfly prowess, especially after he finished 3rd at U.S. Nationals among the senior field last year while he was just 16. He’s still got all three butterfly distances to come at the Mel Zajac meet. For reference, when he went 1:50.0 in the 200 free last summer, he was 1:56.26 in the 200 fly at the same meet. At Sectionals this spring when he was 1:47.73 in the freestyle, he went 1:55.76 in fly, within about a half-second of his lifetime-best.

Here at the meet, that 200 looked easy and smooth. More in the tank.

I hope Dan Schemmel has Luca on speed-dial!

(Is that an NCAA violation to even suggest such a thing?)
🙂

Not a violation, but shows you don’t realize he’s committed to UGA

Second fastest in history and you still need a 1.3 second drop over just a hundred to get a record nearly as old as you are. Insane time. I think that 100 fly and the 200 IM are probably even harder than the 200.

We’re about to see some fast swims from Urlando at this meet as it looks like he’s rested.

Doubt he’s fully rested. He was presumably somewhat rested three weeks ago for HS sections and he’ll want to peak at Nats

Have you seen this guy’s consistency? Billy is way too good of a coach to rest him for mel zajac. He’s not rested. He’s just really, really good.

He’s gonna make the team in the 200 fly and 800 free relay next year. Would he be the Youngest male qualifier since Phelps?

I can’t think of anyone else making it before college

Aaron Pierson, Ian Crocker and Klete Keller were all 17-year old high school students when they qualified for the Olympic team in 2000. Phelps was also on that team, at age 15(or was it 14?)

He was 15, but I was thinking since that games. But you’re right, it’s amazing the young talent they had on that team. Crocker and Peirsol’s legacies are legend, and Peirsol is still the greatest backstroker in history in my mind. Keller’s anchor in the 2004 4×2 relay is one of the greatest legs of all time. Seriously great class, thanks for reminding!

I believe Keller was 18, but it was before he started college

Right and in August which means he was not a “high schooler.”

Klete was 18 at 2000 trials. But let’s not forget how much ridiculously faster the high school kids are today and just generally how much faster and deeper the field is getting each year!

Joe Hudepohl made it at his junior year.

Joe Hudepohl made the Olympic team in his junior year.

I though Dressel had a 200 fly spot locked up. smh

You gotta learn when to move on with the crowd. You’re probably one of those that repeats a joke when he gets no reaction.

This man wants a 1:45 relay spot next year to go with the butterfly, hope Lochte is hard at work!!!

The Usa will have many candidates for spots on that relay …..its gonna rock hard at the OT