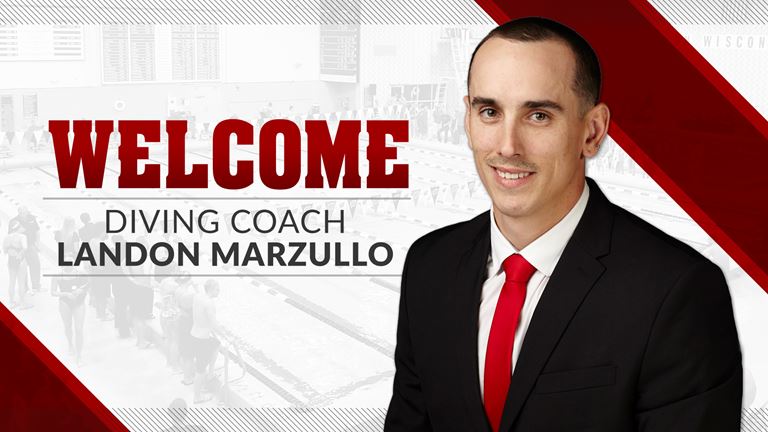 At UNLV, Marzullo was the 2019 WAC Diving Coach of the Year. Current photo via Wisconsin Athletics

The University of Wisconsin has announced Landon Marzullo as its new diving coach, the school announced on Friday. Marzullo comes to the program from UNLV, where he was hired in 2016. In his 3 seasons with the Rebels, he coached Tazman Abramowicz to become the school’s first men’s qualifier for the NCAA Championships in more than 30 years; and Myka Fielding to become the school’s first female NCAA qualifier in more than 20 years.

“Through my conversations with both Landon and his colleagues in the diving community, it became clear that he was exactly what we were looking for,” program head coach Yuri Suguiyama said. “His experience in developing conference champions and NCAA qualifiers, combined with his passion for coaching and ensuring an awesome student-athlete experience, make him the perfect fit for us. I’m excited for him to immediately impact our program at the conference and NCAA level, and for our student-athletes to have the opportunity to work with him.”

Marzullo, who also served as head coach of the Rebel Diving Club, was named the WAC Diving Coach of the Year in 2019. That honor came after leading the freshman Abramowicz to WAC titles in the men’s 3-meter and platform events.

“I couldn’t be more excited to join the UW swimming and diving staff. It has always been a dream of mine to coach in the Big Ten, and I want to thank Yuri and the rest of the Badger staff for making this possible,” Marzullo said. “It is an exciting time for Wisconsin swimming and diving with the new facility coming this year. With this excellent staff and the overall support for the swimming and diving program, the sky is the limit for this team. I can’t wait to get right to work.”

Prior to UNLV, Marzullo spent a season as a volunteer assistant at Ohio State. As an athlete, he was a 10-time collegiate All-American while diving collegiately at Indiana and Florida State. he was the 2008 Big Ten Diver of the Year and Big Ten Freshman of the Year after sweeping the conference springboard titles. He would later earn All-ACC honors in both seasons at Florida State. He was the 2005 Pan American Junior Championships gold medalist on platform and a 5-time US National Team selection.

He replaces Anton Sslobonouv, who spent 7 seasons as the Badgers’ diving coach.

At the 2019 Big Ten Championships, the Wisconsin women scored 40 points in diving, with freshman Tereza Vithoulkas coming through on an 11th-place finish in the platform as their only top-16 finisher. The Wisconsin men scored 36, all from junior Kevin Pomeroy, who had a high mark of 8th in the platform final.

Those 36 points for the men were crucial in that Wisconsin was only 30 points ahead of Penn State for 6th place in the overall team standings.

Wisconsin is still on the hunt for a new coach: Neil Caskey was named the assistant coach for the Stanford men this week.