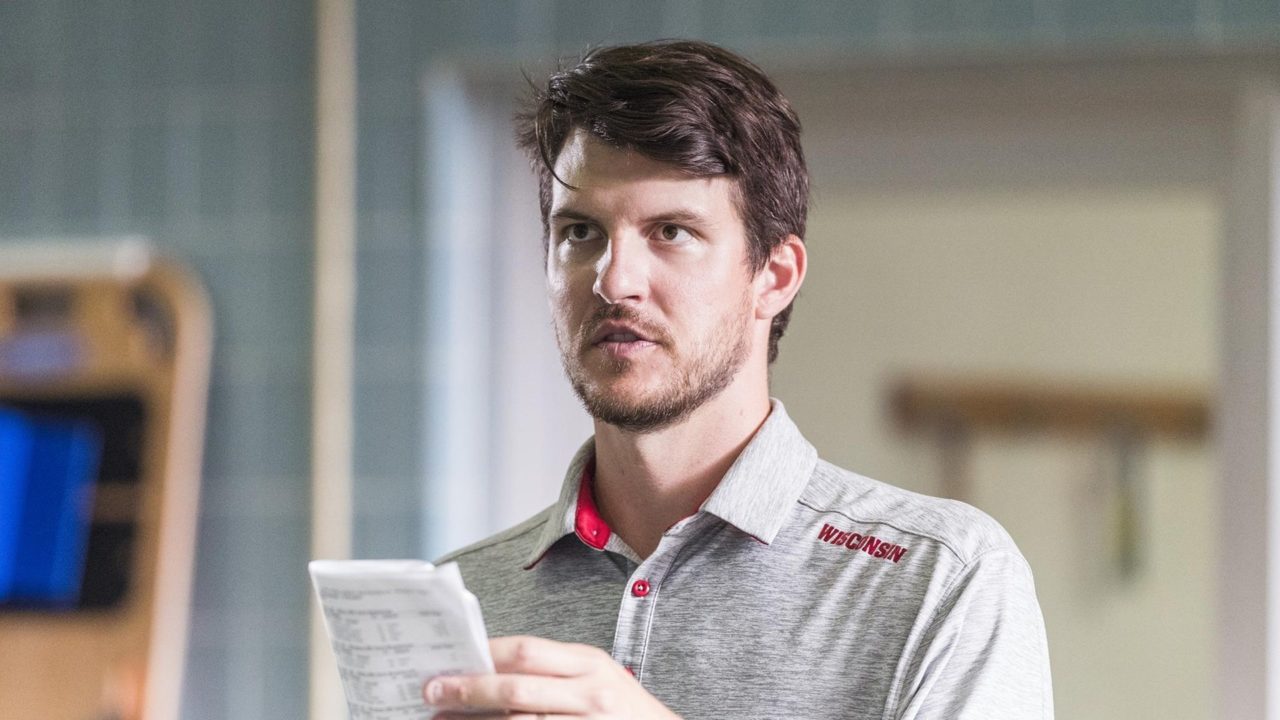 Caskey heads to Palo Alto after four seasons serving as an assistant at Wisconsin. Archive photo via Wisconsin Athletics

“I would like to thank both Dan Schemmel and sport administrator Tommy Gray for providing me with this phenomenal opportunity to join the program,” Caskey said in Stanford’s release. “Dan has always been someone I have had a tremendous amount of respect for both as a coach and as a person. He has one of the most brilliant minds in our sport, brings a contagious enthusiasm to the pool each day and I can’t wait to get to work with him on The Farm.”

In his own career at the University of Texas from 2008-2012, Caskey was a two-time NCAA champion on the 800 free relay and an eight-time All-American and eight-time Big 12 Conference champion. He graduated in 2013 with a bachelors’ degree in advertising, and now owns a masters’ degree in educational leadership and policy analysis from Wisconsin.

“I am elated to have Neil join us on The Farm,” Schemmel said. “We spent three seasons together at Wisconsin and I witnessed firsthand his character, passion and knowledge of the sport. Neil brings a wealth of experience in what it takes to be elite but, more importantly, is an outstanding individual that will be a great role model for our student-athletes. He is going to help us achieve special things in the coming years.”

The Cardinal won back-to-back Pac-12 Championships in 2016 and 2017 after a four-year title hiatus but fell to recent national champion Cal by a wide margin in 2018 and 2019.

Schemmel was announced as the Stanford men’s new head coach May 14, taking over for Ted Knapp, who stepped down after 35 years with the program and seven as head coach. He comes to Palo Alto from the University of Hawai’i, where he headed the program for three seasons. Prior to Hawai’i, Schemmel was an assistant for five seasons at Wisconsin, and before that, was as an assistant at Michigan State, his alma mater (c/o 2008).

Looks like Neil will be making less frequent trips to crush Yetis in Winterfell now that he is out west. Back pocket option for future Lord of Casterly Rock…

18
-4
Reply
Geralt of Trivia
Reply to  Bran the Broken

Chaos is a carousel

Great hire! Neil has been rising quickly in the coaching ranks, and is a wonderful guy.

Lots of youth, energy, and vigor going for these two coaches. I wish them much success in RECRUITING AND DEVELOPING the best talent out there.

The Badgers will miss you tons! Much deserved and best wishes.

Best of luck to Neil. The Badgers will certainly miss him.

Jeff is still there?

Keep in mind that the official start dates don’t usually coincide with the announcement dates. So, it’s very possible that Jeff is coaching out his contract/the season/continuing to prep swimmers for their big meets, while out looking for his next job as well. That would be the professional thing to do.