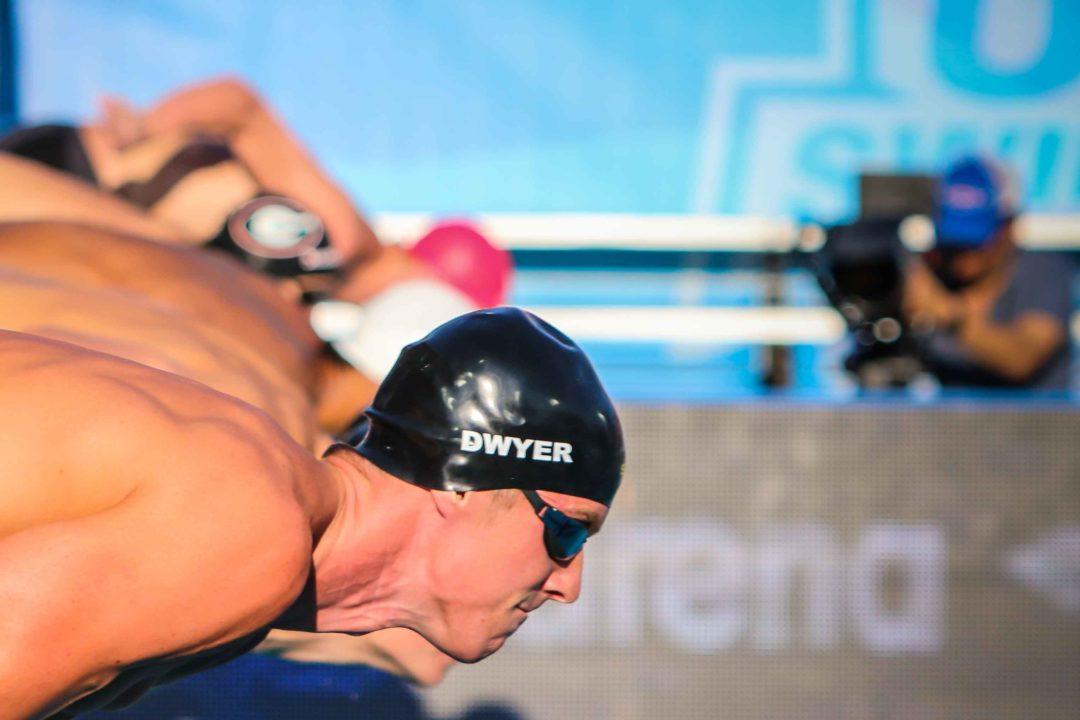 Updated Team USA rosters for this summer's big meets show a few changes, including Conor Dwyer appearing to be off the team. Current photo via Jack Spitser/Spitser Photography

It appears that Olympic gold medalist Conor Dwyer will not be representing the USA at this summer’s World Championships after all, as his name no longer appears on an updated roster posted to the USA Swimming website with a date of May 1st.

Dwyer, now 30 years-old, qualified for the 4×200 free relay with his 1:46.08 effort at last summer’s USA Nationals, which served as the qualifying meet for both last summer’s Pan Pacific Championships and this summer’s international meets. While Dwyer’s social media seems to indicate that he’s been more focused on traveling than training as of late, that also appeared to the case last year, but he still managed to put up the 4th-fastest time by an American swimmer last year.

SwimSwam reached out both to Dwyer and USA Swimming to see if there was any explanation as to why Dwyer is no longer on the roster, but did not receive a response to either inquiry. While Dwyer hasn’t raced at all since last summer, according to the SWIMS database, he does appear in the USADA testing database, indicating that he has not officially retired.

With Dwyer out, Jack Conger who had already made the team for the 100 fly, now has the 4×200 free relay listed as one of his events. He finished 6th in the 200 free at Nationals with a 1:47.45, but was “bumped” out of officially making the team for that event when Zach Apple popped a 1:46.78 in the B-final at Pan Pacs. Conger theoretically could’ve been considered for the relay team anyway, as he has a lifetime best of 1:45.77 from the 2016 Olympic Trials, and also split a 1:45 on the relay at 2017 Worlds despite not initially making the team in the event, and all relays are selected by the coaching staff. However, Dwyer’s absence makes it more likely that Conger will end up in this event.

It’s also worth noting that three swimmer who have had health issues this year — Nathan Adrian, Jack LeVant, and Grant Shoults — all still show up on the updated roster, which indicates it’s at least possible, if not likely, that all three will swim this summer.

While USA Swimming hasn’t posted updated rosters for Pan American Games or the  World University Games directly on its website, a web search turned new rosters for both events.

Hellen Moffitt no longer appears on the updated Pan American Games roster. She was initially selected for the 100 fly. Instead, Ali DeLoof is now listed for the 100 back. Additionally, Andrew Abruzzo now appears for the 1500 free. Only one swimmer, True Sweetser, was slated to swim the 1500 free on the initial roster.

The only change on the new World University Games roster is that Devin Nowicki is out and that Ian Finnerty has been added to the roster. This is no surprise, as Nowicki told SwimSwam that he was no longer enrolled in college and had told USA Swimming that he was ineligible for WUGs.

Will this open a slot for Dressel to potentially swim? At least in prelims…

I’m not sure this really changes things for Dressel. He still has prelims and semis of the 100 fly and 50 free the same day. I imagine this will primarily make it more likely that Conger will get a shot at the relay, although it’d mean a double for him. If I’m the USA coaches, I’m feeling pretty good about a potential relay team that consists of four guys with lifetime bests of 1:45 (Seliskar, Conger, Pieroni, and Haas).

I prefer Apple to Conger

For the 200 free relay, Conger has shown up in the big events; no disrespect to Apple.

Hasn’t conger been training for mainly the 100 fly 100 free now?

If Dressel is swimming we’ll theres a food chance he’s the fastest 200 swimmer they have so I wouldn’t play down his chances too much. He can handle that triple, especially in semis

Not sure he’s faster than Haas, especially in LC.

I do think CD is on this relay if the coaches think his schedule allows it, the other two spots are up for grabs assuming Haas is on point in the individual

I think Dressel is going to be on this relay regardless. And not a prelims spot. Given his schedule, I think it will be finals-only.

To Clarify — I thought the 1:47 swim in Richmond indicated Dressel would likely be ready for a 1:45 relay leadoff. But that 156.0 fly swim in Atlanta was a total game-changer (the 47.8 100 wasn’t bad either) — it shows his massive fitness and ability at the 200 distance. Based on that, and our practice of putting guys on relays who didn’t qualify in the indv. event (see Rio) — I think it’s more likely than not that Dressel swims the 4×200.

agreed – he has the endurance / speed for a solid 200 free

Hope LeVant and Shouts are healthy and in good shape. They will have to use them in prelims to make sure they are good to go but then hope the relay can qualify top 8….not an automatic!,

Does the required use of alternates apply for world’s? I thought it might just be Olympics.

When do they have to decide if they are ready to compete?

Where’s Dean Farris when we need him???

good question–does it matter that he just declared a red shirt year?

He has been living the dream dating a model and traveling the world with her. He’ll be back for trials and when he makes the team, we could all be peanut butter jealous!

totally agree, the guy is living the dream

Was about to say this, she is hot AF. Seems like he’s been doing that and surfing. Probably much more fun than training….

I have to stand up for that.

He won’t make the team.

Put Farris on the roster you cowards

That would be unfair for the other teams, they can’t keep up with him

Exactly. Phelps got to swim the 4 X 100 free relay at Rio without swimming it at Trials. The even better GOAT should be able to make the roster just for being, well, a superhero meme come to life.

But Phelps was on the team already for another event. There’s a big difference.

I thing I do just fine.

It feels like Conner Dwyer has been halfway retired since 2012

Sounds about right, swimming is obviously not his priority right now which is okay. Most would probably go for the traveling as opposed to the grind of training.

Date the model, travel the world —- or go back to train with Troy who got you there. Sounds like an IQ test he passed.

Dwyer is a boss. He’s living life. I wouldn’t want to swim world championships if I was dating supermodels and traveling to some boujee places every week. It’s not motivating for him. Maybe he’ll be motivated for 2020

26
-7
Reply
ERVINFORTHEWIN
Reply to  Dwyer is a boss

as if dating models was something amazing …….so so funny