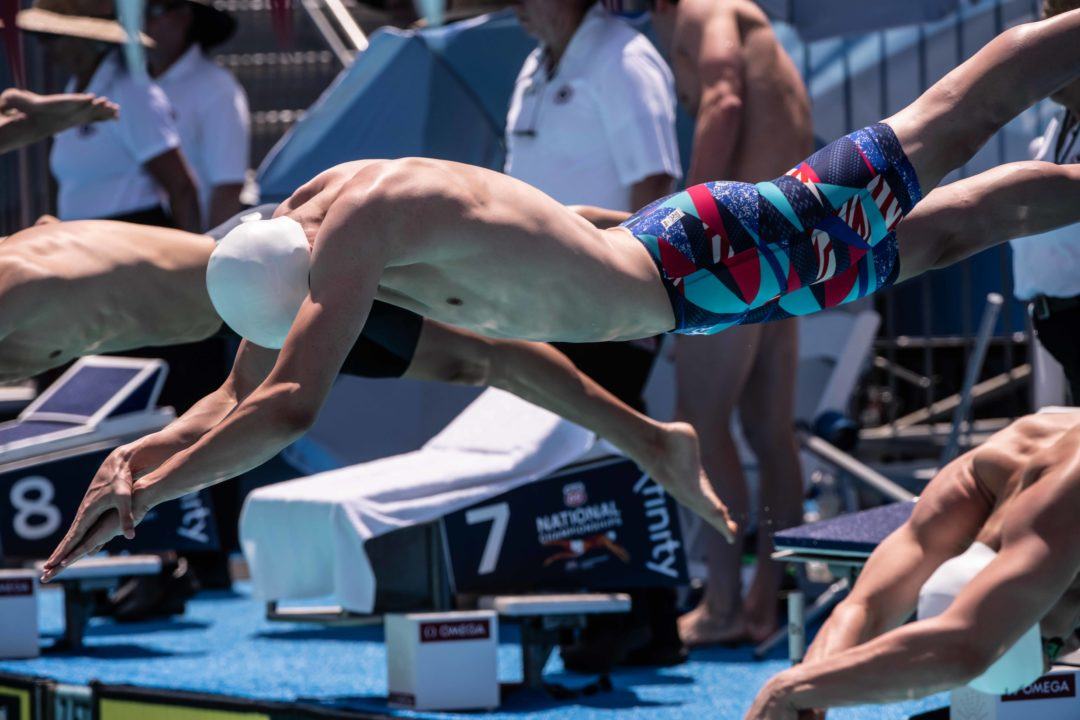 Another example of a swimmer following their own path, it seems to be paying off for Nowicki in the pool. Current photo via Mike Lewis/Ola Vista Photography

After racing in Bloomington this weekend, National Team member Devon Nowicki spoke with SwimSwam to clarify his status in swimming. Nowicki, who seemingly came out of nowhere last summer to claim 3rd in the 100 breast (59.48) and 2nd in the 50 breast (27.12) at the 2018 National Championships, had previously competed for and been enrolled at Oakland University. After his first year at Oakland, however, Nowicki had struggled with motivation and become academically ineligible the 2nd semester of both his sophomore (2016-2017) and junior (2017-2018) years.

After having the success that he did last summer with his club team, Michigan Lakeshore Aquatics (MLA), Nowicki, along with his coach and parents, decided it was the best decision for him to forego his final year of college eligibility and solely focus on swimming. Nowicki also stopped taking classes this year, so while he was initially on the 2019 World University Games roster following summer nationals, he made USA Swimming aware that he wasn’t actually eligible for that team.

Another example of a swimmer following their own path, it seems to be paying off for Nowicki in the pool. He was happy with his performances this weekend in Bloomington, which included 9th in the 100 breast (1:02.09) and 6th in the 50 breast (28.07).

Extremely talented and hardworking to say the least. Agree with decision to go pro. Come back of the year 2018 nationals. From what I gather sounds like he is focused with steady game plan headed into trials. One concern: the competition needed to push him in practice each day along the way (most critical 12-13 months). Olympic talent can’t be pushed by age group swimming. He doesn’t break 59 at nats this summer then need to re evaluate where to train. Best of luck in 2020!

All I hear as an MLA parent is that he’s a great person, supportive team mate, a positive influence on our young swimmers, and perhaps best of all – humble. Something we don’t see enough of among pro athletes. We have a great swim program here and are fortunate he is part of it. I think it’s sad how people who don’t even know someone can make such judgemental comments – just further evidence of all that’s wrong with the world. Each person’s journey is their own – how about showing some support and respect instead.

I love training with him everyday. It’s amazing to see how much he pushes himself each day. It’s definitely paying off and I can’t wait to see him crush the comp !!

Pullin for this guy…the story could have a great ending.

Go Dev!! He is an amazing teammate, and has made a lasting impact with so many swimmers of all ages on the team. Idk, but to me, that speaks more about his character, leadership, and passion for the sport rather than his eligibility status. Even outside of the pool, he’s an a great person. This guy is going places, and he is going to have the biggest fan base supporting him wherever his career takes him.

if only everyone could have the opportunity to get to know the awesome teammate & friend dev is both in & out of the pool. can’t WAIT to watch this dude spread inspiration & smiles to everyone he encounters. oh… & maybe crush the comp while he’s at it ¯\_(ツ)_/¯

big boy times coming out of a big boy