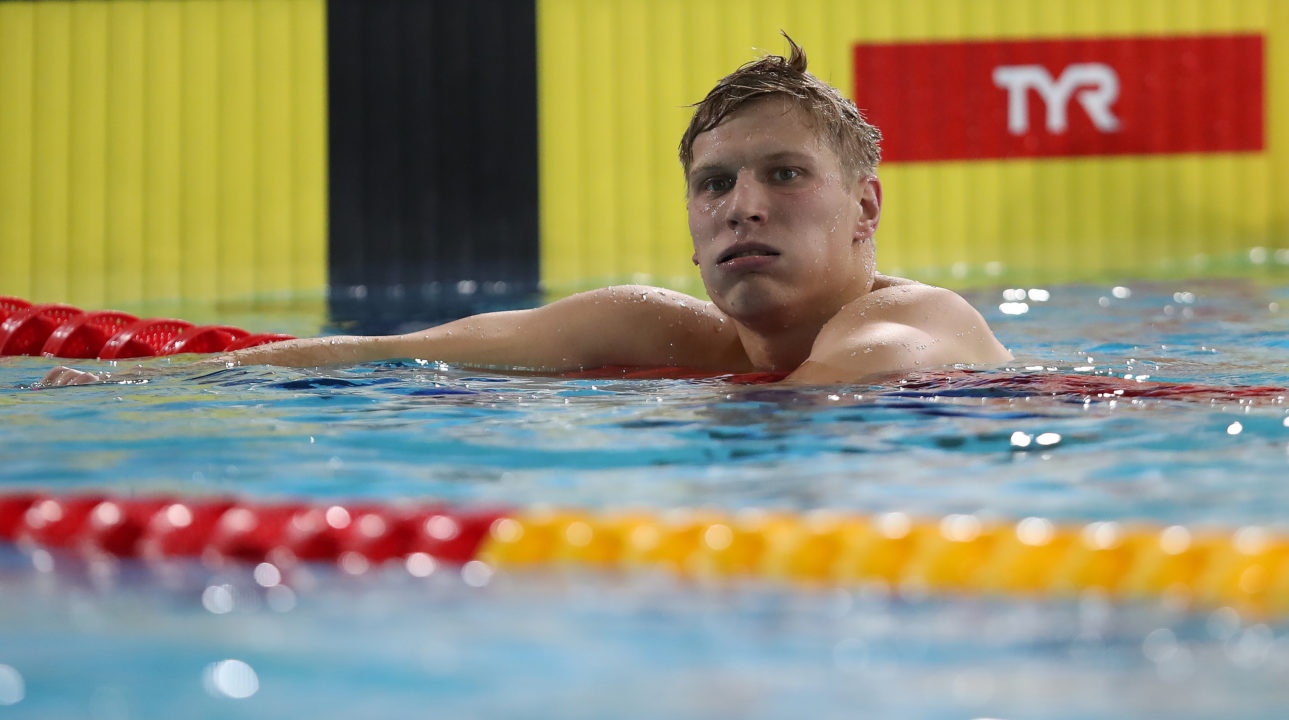 Take note of the foreign talent from Great Britain and Australia who will be taking on some of America's best at this week's U.S. Nationals. Archive photo via Ian MacNicol for Scottish Swimming

We revealed earlier this month that 3-time Olympian Hannah Miley would be among the Scottish swimmers head to Stanford, California to compete at the U.S. National Championships. With the psych sheets now published we can identify the remaining British continency, as well as the strong Australia representation set to race at the 5-day meet.

Note: foreign swimmers can swim the A, B, and C finals, but not the 18 & under D final.

From Australia, we’ll see the likes of Elijah Winnington, Matthew Temple, and Kotuku Ngawati hit the California pool, with Temple coming straight from the World Championships in Gwangju, Korea. There, the 20-year-old finished 8th in the men’s 100m fly and 10th in the 200m fly.

As for Winnington, the World Junior Record holder had a nightmarish World Championships Trials, which rendered the freestyle ace off of the Australian team for Gwangju. He’s looking to get back on track, starting with some solid racing against an international field here in Stanford.

For Miley’s part, the Scot made an appearance most recently at the British Summer Championships, putting up her best 400m IM outing since coming back from ankle surgery late last year.

Kathleen Dawson, too, is coming back from injury, with the University of Stirling backstroker getting under the minute mark once again in 59.99 at the aforementioned competition.

Although she’s representing the University of Arkansas, Anna Hopkin is another British swimmer ready to continue on from World Championships, with the 23-year-0ld having had the meet of her life in Gwangju. Hopkin logged a huge personal best in the women’s 50m free of 24.34 in the semi-finals before hitting 24.40 for 7th place overall in the final.

In the women’s 100m free, Hopkin also earned a lifetime best of 53.21 before anchoring the British women’s medley relay in a split of 52.65.

Mark Szaranek will bump into dozens of his NCAA teammates as a former Florida Gator. Now representing the University of Stirling, the 23-year-old is entered in the 200m fly, 200m free, 200m IM and 400m IM.

Why is it that the Australians seem to have such a strong need to cheat? Latest revelation includes claims that they even intentionally misrepresented maladies to try to get an advantage in para swimming. This creates some concern given the participation of Australian athletes in U.S. domestic meets.
See https://7news.com.au/sport/swimming/former-swim-star-ashleigh-cockburns-bombshell-allegations-c-373776
If Australian para swimmers are allegedly misrepresenting maladies in order to gain an advantage, it is certainly a possibility that Australian non-para swimmers may be doing the same with regard to TUEs, etc if encouraged within the Aus swimming program. Close examination is needed by both ASADA and international anti-doping authorities to make sure TUEs are being legitimately obtained.

Old news and certainly not limited to Australia, take a closer look in your own backyard.

Couldn’t agree more, I do not have blinders on regarding any particular country. It is an issue that needs to be examined across-the-board internationally, including in U.S., with uniform standards employed and enforced by an independent entity. But lately it seems, with the Shayna Jack fiasco and this latest paralympic revelation, that Australia has been particularly aggressive in misbehavior.

Nope. American. Sorry pal. And I don’t care whether it is an American swimmer, Chinese swimmer, Australian swimmer, or one from any other country–faking a disability in order to get an advantage or pretending to have a malady in order to get a TUE is pretty sick behavior and needs to be halted. Hats off to the whistleblowers.

A lot of very familiar british names on that list + Winnington. Will be interesting to see what Tutton, Willams, Large, Dawson, Miley, Milne, Benson, Hopkin, Szaranek and Winnington can do.

Hopkin will not be racing this week.

Can athletes outside of the US actually advance to finals or can they only compete in heats?

Foreign swimmers can race the A, B, and C finals, but not the 18 & under D final.

Some of the US and other countries’ top performers are entered in FINA World Cup starting this Friday in Japan http://omegatiming.com/2019/fina-swimming-world-cup-tokyo-live-results