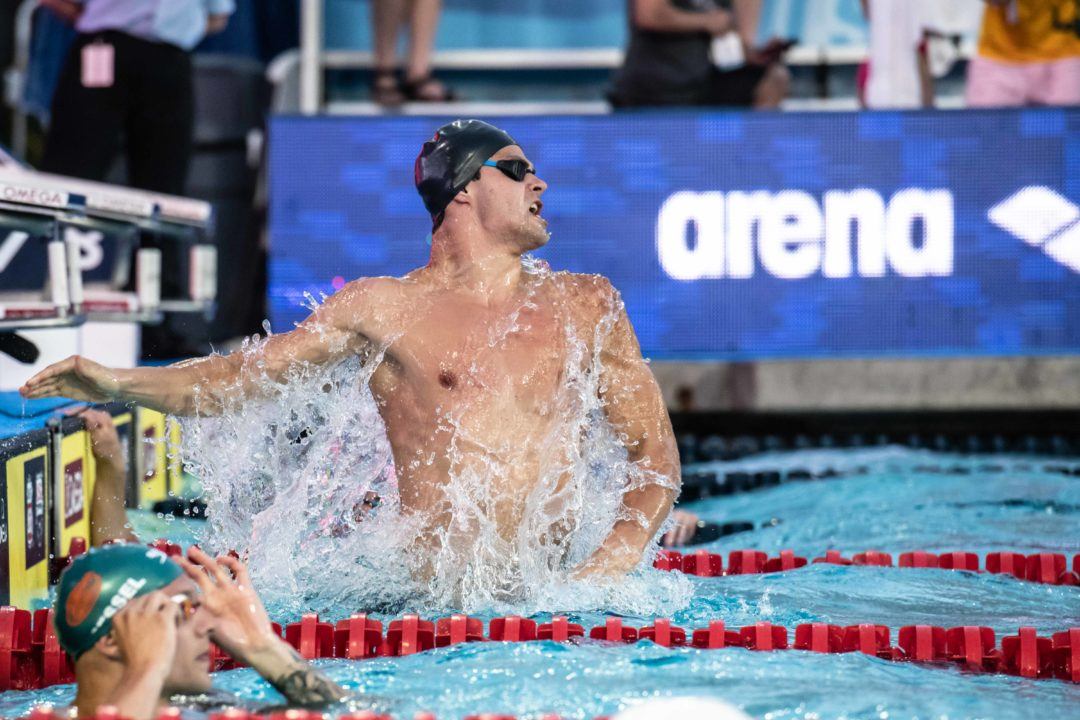 Michael Andrew has already qualified for Worlds in the 50 fly, but he's loaded up his schedule tonight to try and qualify for Pan Pacs and add to his Worlds schedule. Current photo via Mike Lewis/Ola Vista Photography

Michael Andrew has already qualified for Worlds in the 50 fly, but he’s loaded up his schedule tonight to try and qualify for Pan Pacs and add to his Worlds schedule. Andrew will be swimming the 100 fly, 50 breast, and 50 back. In the 100 fly, he’ll be up against World Champion Caeleb Dressel again after their close 1-2 in the 50 fly. Dressel is still looking for his spot on the Pan Pacs team. Andrew tied Adam Peaty’s 50 breast U.S. Open Record this morning and will face Ian Finnerty, who joined him under 27, and American Record holder Kevin Cordes tonight. The 50 back will be stacked with Andrew, defending champion Justin Ress, and Olympic champions Matt Grevers, Ryan Held, and Ryan Murphy all chasing the American Record.

Penn State’s Ally McHugh had arguably the swim of her life tonight. McHugh, who represented the U.S. at WUGs last summer, used a monster freestyle leg to run down 2017 champion Leah Smith and Stanford’s Brooke Forde (4:35.09), winning in 4:34.80. That’s a best for McHugh by almost 5 seconds. She’s now the 4th fastest in the world this year and the 6th fastest American in history.

Forde, who led the race until the final stretch, also put up a big best in 4:35.09. That’s a best by 4 seconds and ranks her #5 in the world. She’s now the 8th fastest American ever. Olympic IMer Melanie Margalis dropped a second off her lifetime best from earlier this season for 3rd in 4:35.50, holding off fellow Olympic gold medalist Leah Smith (4:35.68). Margalis is the 10th fastest American 400 IMer ever, while Smith remains at #4 with her 4:33.86 from last summer.

Texas’ Evie Pfeifer followed up a good morning swim with her first ever sub-4:40. She was just out of the top 4 in 4:38.68. She’s now dropped almost 10 seconds throughout the season. Kay Sargent, a transfer to NC State, dropped another second for 6th in 4:40.24.

15-year-old Mariah Denigan dropped nearly 3 more seconds tonight, just running out of room to chase down Emma Barksdale (4:40.20), becoming the 7th fastest American ever in her age group in 4:40.62. Barksdale made almost a 2-second drop.

It was all Chase Kalisz again tonight. Though Stanford’s Abrahm DeVine, the 2018 NCAA champ in the 400 IM, took it out hard, Kalisz broke away on the back half to win by body lengths in 4:08.25. That’s the fastest time in the world and his season best by about 7 tenths. The Georgia duo will represent the U.S. again this summer as teammate Jay Litherland was about a second shy of his best to take a comfortable 2nd in 4:10.21. The 3rd Bulldog in the heat, Gunnar Bentz, finished 7th in 4:15.48.

Cal’s Sean Grieshop had a breakthrough swim. He hadn’t swum a best time since setting the World Junior Record at 4:14.00 at 2016 Trials. Tonight, he hammered home on the freestyle leg to take 3rd in 4:12.72. Texas’ Sam Stewart made a huge 6-second drop in prelims. He shave a couple more tenths off tonight for 4th in 4:13.65.

DeVine, who took it out with the lead, faded to 5th in 4:13.77. He dropped a second off his best tonight. DeVine has a good shot at qualifying in the 200 IM later on. He swam that event for the U.S. at Worlds last summer.

Robert Finke made a big drop of almost 3 seconds, turning in a 4:15.79 in the B final to become the 7th fastest American ever in the 17-18 age group. Finke is likely on the Pan Pacs squad after taking 2nd in the mile and represented the U.S. in that event in Budapest.

As expected, Louisville’s Kelsi Dahlia took the win, posting a 56.86. Kendyl Stewart was out with the lead, but Dahlia used a strong kick out and ripped through the back half to distance herself from the field. She’s now secured her spot at both Pan Pacs and Worlds, since she landed a Worlds spot as she tied the 50 fly American Record last night. Teammate Mallory Comerford clipped her best by .02 for a lifetime best 57.95, finishing 4th.

Cal’s Katie McLaughlin finally had her breakthrough. She hadn’t broken 58 since 2015, but she hit the mark tonight with a lifetime best 57.51 to likely secure a spot at Pan Pacs. She’s now the 7th fastest American in history. Stewart held on for 3rd in 57.70, marking her first best time in the event since 2014.

If there were any questions about Caeleb Dressel at this meet, he put them to rest tonight. Dressel, who finished 6th in the 100 free earlier in the meet and took a narrow loss to Michael Andrew in the 50 fly, busted through the back half here to get the job done. Dressel is now on the Pan Pacs team, winning with the 10th fastest American performance ever in 50.50. That’s 3 tenths faster than he was last summer, and give how litte he seems to have rested for this, that Phelps World Record is in danger at Pan Pacs.

Jack Conger also finally secured his Pan Pacs spot. He was just a tenth off his lifetime best from march. After tying for 3rd in the 200 fly, Conger can have rest assured that he should make the Pan Pacs squad. After qualifying for Worlds last night with a win in the 50 fly, Andrew may have picked up a Pan Pacs spot here. We cant be 100% sure yet, but he’s in good shape with his lifetime best 51.68 for 3rd place.

Towson’s Jack Saunderson, who swam his lifetime best 51.48 this morning to qualify 1st, was a few tenths shy of that tonight in 51.88 for 4th. Cal’s Tom Shields, who swam both butterflies in Rio, was also sub-52 tonight in 51.94. Shields is out of Pan Pacs after placing 5th in both the 200 fly and 100 fly. Zach Harting, who qualified for Pan Pacs with a 2nd place finish in the 200 fly, clipped his best again tonight for 6th in 52.00.

Defending world champ Lilly King touched out Molly Hannis for the national 50 breast title, redemption after missing the Pan Pacs team in the 200 breast last night. The win tonight won’t put King onto the Pan Pacs squad (she’ll have to wait for the 100 breast for her last shot at that), but it does essentially clinch her a berth on the World Championships team next summer, where she’ll have a chance to defend her 2017 world title and challenge her own world record.

Hannis fought hard but dropped off the lead pace over the final 10 meters or so and just missed the 30 second barrier. King wound up going 29.82 (two tenths off her season-best) and Hannis 30.07. Those two sit 1st and 2nd in the world this year, though neither bettered their top-ranked times tonight.

Katie Meili was 30.72 for third, and will have to wait for the 100 to fight for her World Champs berth as well. Texas A&M’s Jorie Caneta (30.86) and Minnesota’s Lindsay Kozelsky (30.87) started an NCAA-heavy run, with the latter tying pro Breeja Larson for fifth. Future Indiana Hoosier Emily Weiss was seventh (30.88) and A&M grad Bethany Galat rounded out the heat in 31.19.

23 minutes after his lifetime best 100 fly, Michael Andrew broke the U.S. Open Record in the 50 breast, breaking the tie he shared with World Record holder Adam Peaty to touch 1st in 26.84. He was just 8 hundredths shy of Kevin Cordes‘ American Record and put up the 4th fastest American performance ever. He’s also now the lone 2nd fastest American performer ever, breaking his tie with Olympian Mark Gangloff.

American Record holder Cordes was back in 4th tonight, swimming a 27.21. Cordes, who swam all 3 breaststroke events at 2017 Worlds, was slightly off his prelims time, as were most of the top guys in this heat. He and Ian Finnerty will look to make the Pan Pacs squad in the 100 breast later on. Finnerty, who broke 27 this morning to become the 4th fastest American ever, placed 3rd in 27.19, a few hundredths behind Devon Nowicki. Finnerty is here to make a statement in long course after becoming the first man to ever break 50 seconds in the 100 yard breast at 2018 NCAAs.

Also looking to secure a Pan Pacs spot is 2017 Worlds breaststroker Nic Fink the 10th fastest American ever in this race. Fink finished 6th tonight in 27.49. He has a shot at making Pan Pacs already, but isn’t a sure thing since he placed 4th in his signature 200 breast earlier in the meet.

Ali Deloof charged hard late, but it was American record-holder Olivia Smoliga who held on for the win in the women’s 50 back, booking a return trip to the World Championships. Her 27.70 wasn’t quite as fast as the 27.43 she blasted a few months ago in Mesa, but it was plenty enough to beat the field, with Deloof going 27.88 for runner-up honors.

Caroline Baldwin was just a tick behind in eighth, going 28.26 to round out the heat. In the B final, 15-year-old Phoebe Bacon continued the Americans strong run of youth in this event, going 28.44 to win the consolation heat.

Women’s 50 back reported by Jared Anderson.

Olympic backstroke champion Ryan Murphy had an off year in 2017, but he’s back. After a very good 200 back, Murphy brought in another title tonight with a new American Record. He’s well on his way to sweeping the backstrokes at this meet. Murphy broke the 10-year-old mark in 24.24, crushing his former best time by 4 tenths. He also cleared the U.S. Open Record and Meet Record.

2017 national champ Justin Ress was also under the former record, clipping his best by a tenth in 24.31. Ress has a good chance of qualifying in the 100 back later on, as does Matt Grevers. Olympic champ Grevers took 5th tonight in 24.63. Grevers, the bronze medalist in the 50 back at 2017 Worlds, was about a tenth shy of his best ever. Since Murphy is already swimming the 50 back, he could still qualify to swim the 50 back at Worlds if he either has the fastest or 2nd fastest time in the 100 back between Worlds and Pan Pacs.

Anyone think World Record in 50 Back might go down? They are really close.

Nope it’s been really close for a while

No, but the American record is going down.

It’s still a big ask to drop from 24.5 to 24.0 – some of them will probably swim a little bit slower than in prelims, as these things usually go.

They’re right there, but world records are just that for a reason. If takes a special swim with every component synching up. Murphy looked like he practically braked into the wall this morning, but Ress and Held looked great too.