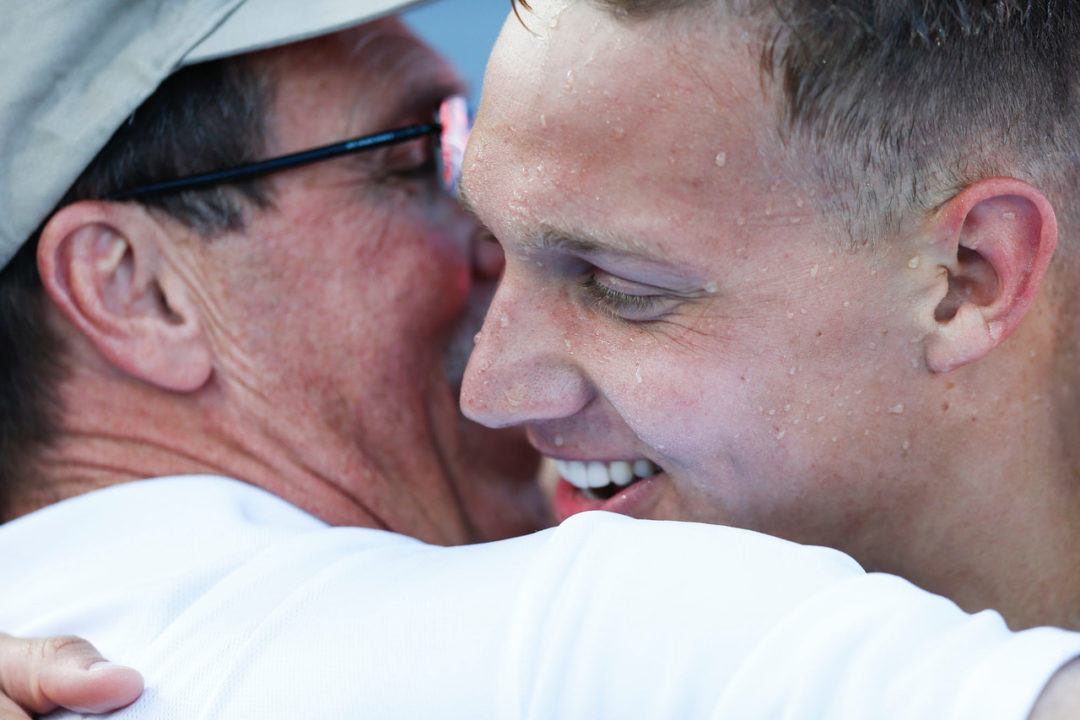 Caeleb Dressel and Jack Conger battled back from a disappointing first two days of competition to go 1-2 in the 100 fly on the third night of the 2018 US Nationals. Current photo via Tim Binning/TheSwimPictures.com

Ok, in the grand scheme of things, “crisis” might be a little strong.  But we weren’t expecting either Caeleb Dressel or Jack Conger to still need to nail down their spots on the Pac Pacs roster on the third day of the meet, and the USA’s Pan Pacs roster was going to look quite a bit different than expected if neither man qualified.

But fears were assuaged this evening as Dressel blasted a 50.50 to take 1st, and Conger finished a stroke behind him in 51.11.  That definitely locks down a spot for Dressel, and almost certainly assures Conger of a spot on the Pac Pacs roster as well.

Dressel’s time also moves him ahead of Chad LeClos’s 50.65 to become the faster swimmer in the world this year, and rates as the 10th-fastest swim of all time.

Both swimmer had looked a little off all week, possibly the result of both trying to swim through this meet, with an eye on Tokyo.  On Wednesday, Dressel shockingly finished 6th in the 100 free, possibly earning him a spot on the 2019 World Champs roster, but not putting him on the Pac Pacs roster, where only the top four in the 100 free earn invites.  The same night, Conger, finished tied for 3rd in the 200 fly after winning the event last year.  Again, he might’ve eked out a roster berth with that swim, but it was in no way guaranteed.

Yesterday, Dressel finished 2nd in the 50 fly, while he was faster than he was here last year, that’s an event that won’t be competed at Pan Pacs and couldn’t get him a roster spot.  Meanwhile, Conger picked up 6th in the 200 free with a 1:47.45 was slower than his time of 1:46.96 earlier in the year, which was the fastest among US men heading into this meet.  Like Dressel in the 100, that might earned him a spot on the World Champs roster, but wasn’t enough to punch his ticket to Pan Pacs.

Dressel would’ve still had a very realistic shot of making the team on Sunday, where’s he entered in the 50 free.  But the win tonight takes the pressure off halfway through the meet, and also reopens the possibility of Dressel swimming the 100 breast tomorrow and/or the 200 IM Sunday, two events in which he’s had short course success.

While personally satisfying, getting Dressel and Conger on the Pan Pacs roster has larger implications.  Dressel needs to be able to swim the 100 free at Pan Pacs in order to be able to defend his title as next year’s Worlds, as the US roster will be selected on the basis of combined results from this week and Pan Pacs. Having Conger on the roster will also allow the Team USA coaches to have him as an option on the 4×200 relay, especially if he’s looking strong that week and some of the other potential 4×200 swimmers don’t seem quite as on.

Check back later tonight for all of our updated projected rosters

everyone say a “Hail Dean” tonight

He was much better than expected at this meet. He still has it in him!

He’s been faster then conger ever has in the 100

He’s has his time to shine, time to give the young guns a shot.

Number 6 fastest in the 50 back this year.

Shields is a smart, articulate person who understands strategy. He might make a great announcer for TV at some point in the future.

Nothing would make me happier than Shields taking Rowdy’s spot.