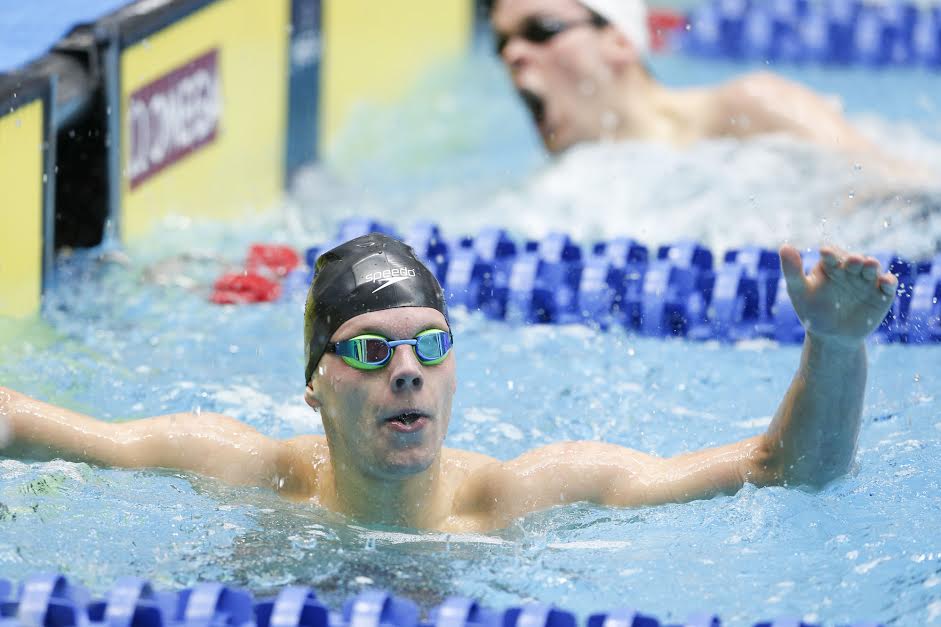 This morning, South Carolina's Fynn Minuth, teammate Akaram Mahmoud, and Michigan's Felix Auboeck all broke 4:10, but tonight they'll be challenged by Townley Haas and Clark Smith, who have also been sub-4:10. Archive photo via Tim Binning/TheSwimPictures.com

Top seed Texas was a blistering 1:15.35 this morning without using their fastest 50 freestyler. Joseph Schooling, who swam an 18.76 indvidually, will likely replace John Shebat. Schooling has traditionally been 18-low to mid on the relays, but that was before he lowered his personal best to an 18.74 at Big 12s this season. Between Schooling and Jack Conger, who split a quick 18.45 in prelims, the Longhorns will more than likely have at least 2 18-low splits.

Florida will be there to challenge, led by Caeleb Dressel. This morning, Dressel popped a 17.99 on the 2nd leg, marking his 3rd split under 18 seconds. NC State and Cal should also be in the mix. The Wolfpack’s Ryan Held may be toying with the 18-second barrier if he doesn’t lead off. Cal, on the other hand, is likely to improve on their prelims time with Ryan Murphy, who wasn’t on the prelims relay.

Tonight, though, those 2 swimmers will be hard pressed to defeat Texas distance studs Townley Haas and Clark Smith. Haas is the reigning champion and has a lifetime best of 4:09.00. Smith, on the other hand, was the 2015 champion in the 500 free. His personal best is a 4:08.82 makes him the fastest swimmer in the field. Last season, Smith had a disappointing NCAAs, and didn’t get a 2nd swim in the event. He’s now looking for redemption, but Haas will be tough to beat as he races for back-to-back titles.

Cal’s Ryan Murphy is another one of the top contenders in this race. He’s the 4th fastest performer of all time in the event after posting a 1:40.27 at last season’s NCAAs, and will certainly take advantage of his backstroke speed to try and hold off Licon on the back half. Then, we have to consider NC State’s Andreas Vazaios, who became the 9th fastest performer of all time with his 1:40.77 in prelims. Vazaios is a newcomer in the NCAA, having joined the Wolfpack in fall 2016, but he’s already established himself as one of the best swimmers in the nation.

Florida’s Mark Szaranek, now the 10th fastest performer of all time with his 1:41.11 from prelims, and Georgia’s Chase Kalisz will face off again after their exciting IM battles at the SEC Championships. Kalisz’ teammate Gunnar Bentz threw down a personal best 1:41.12 this morning to set himself up as the 4th seed, and could wind up making it into the top 3. Another 1:41-low swimmer to watch out for is Cal’s Andrew Seliskar, who put up a 1:41.24 at Pac-12s. All 4 swimmers could dip down into the 1:40-range tonight.

It’s no secret that Florida’s Caeleb Dressel is the heavy favorite in the 50 free. Dressel will be chasing his own American Record tonight, which was set at an incredible 18.20 at last season’s NCAA meet. While it’s not highly likely that we’ll see a sub-18 swim this season, he could, conceivably, become the first man to do so here.

Up for the challenge will be NC State’s Ryan Held and Texas’ Joseph Schooling. If there were an upset in this event, it would most likely come at the hands of one of those swimmers. Held became the 4th fastest performer ever with his 18.58 this morning, while Schooling nearly matched his Big 12 Record 18.74 in prelims.

It would take an 18.72 to break onto the top 10 performers of all time list, and a handful of men are in a good position to do so. Auburn’s Zach Apple (18.93), Cal’s Pawel Sendyk (18.96), and Missouri’s Michael Chadwick (18.99) each broke 19 seconds for the first time in prelims, and could potentially make their way onto that list.

Cal will look to redeem themselves here after almost missing out on the A final. They had the 9th fastest time in prelims, but got bumped up to 8th following Alabama’s DQ. Notably, they didn’t use backstroke star Ryan Murphy this morning, instead using Zheng Quah. On that split alone, they could drop almost 3 seconds. Quah led off in 46.25 this morning, but Murphy’s best is a 43.49 from last season. He’ll be looking to top that and break his own American Record if he’s on this relay tonight.

Missouri led the way through prelims. They stepped up big time to drop almost 2 seconds from their seed time. The Tigers should be competing for the title tonight, but Texas will be tough to beat. The Longhorns have an edge on backstroke after John Shebat lowered his best to a 44.82 with his prelims leadoff, and Joseph Schooling will make a huge drop from his 45.41 split in prelims on the fly leg, as he seemed to cruise through this morning. Breaststroker Fabian Schwingenschlogl is Missouri’s main advantage. He split a 50.66 to Licon’s 51.38 this morning, but Licon will try to equal or better his 50.69 split from last season in the final.

Who will have paced the race correctly to have the final push to the finish?