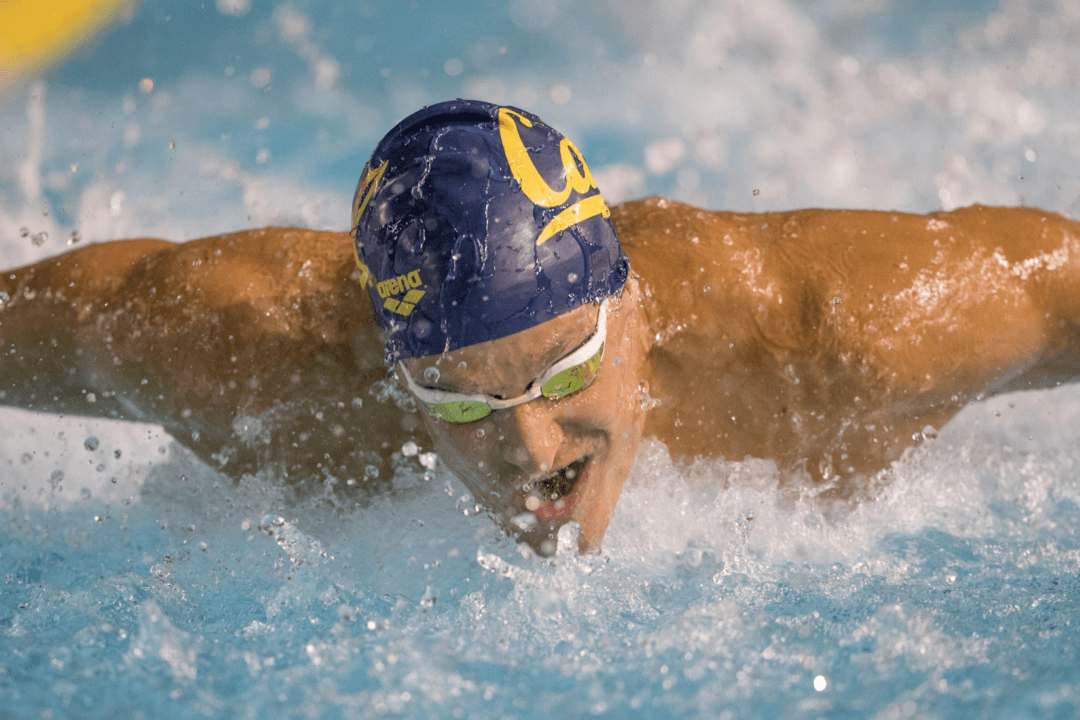 A big blow to Cal: Matt Josa was disqualified out of prelims of the 200 IM after going a 1:41.50 that would have qualified him 6th for tonight's final. Archive photo via “Rafael/Domeyko Photography”

A big blow to Cal: Matt Josa was disqualified out of prelims of the 200 IM after going a 1:41.50 that would have qualified him 7th for tonight’s final.

Josa was disqualified for multiple dolphin kicks on his breaststroke leg. He was second in his heat, beating teammate Ryan Murphy and chasing NC State’s Andreas Vazaios.

It’s a double-whammy for Cal in team points – Josa’s likely 11-15 points are vacated, plus Texas’s Jonathan Roberts moved up from 9th to 8th due to Josa’s DQ.

One heat later, an official raised an arm signaling a DQ for defending 200 IM champ Will Licon of Texas, but results were made official with no DQs.

Josa’s time of 1:41.50 would have qualified 6th here and put him 15th all-time in the event. As it stands, Cal still has Murphy and Andrew Seliskar in the A final, with the latter seeded 6th going into tonight’s final and the former 7th.

I guess they don’t have those rules in d2 swim

It is a shame to see a talented athlete make a decision like that. Josa easily could have placed top 8 by his own ability.

It most likely wasn’t intentional

You don’t do that in a meet without training that way. Likely intentional.

15 meter and double dolphin are two separate things. Don’t attempt to package them together. The officials are a little DQ happy this morning, wish they would just let the kids swim. and for the record he swam the IM in Windsor prelims semis and finals, no dq. doubt he changed a thing

I don’t think the officials were the problem here. It looked like more than just two from my perspective. Both officials caught it.

If an official observes an infraction, it is the officials responsibility to make the call. This is not basketball where fouls or traveling are often ignored. So, letting the kids swim doing multiple fly kicks is an infraction and not fair to the one swimming legally.

Still has Murphy and seiskar* and seliskar is 6th, Murphy is 7th

He’s been on fire since Olympic Trials, yet is still pretty underrated. He’s got a great shot at making three A finals this year.

Any idea why Murphy did the 200 IM? I guess all the events are pretty stacked these days but it seems like he might have been able to do better points-wise in some other event

Good to know Thanks. Saw 7th and was just curious why not something like the 100 fly, although I suppose he wants to focus solely on the 100 back during that session.

This is now the 4th year in a row he’s swam the 200 IM on day 1. And, as DRU mentioned, he has the 2nd fastest best time of anyone in the field and is the 5th fastest performer of all time in the event.